Over 100 arrested at facility 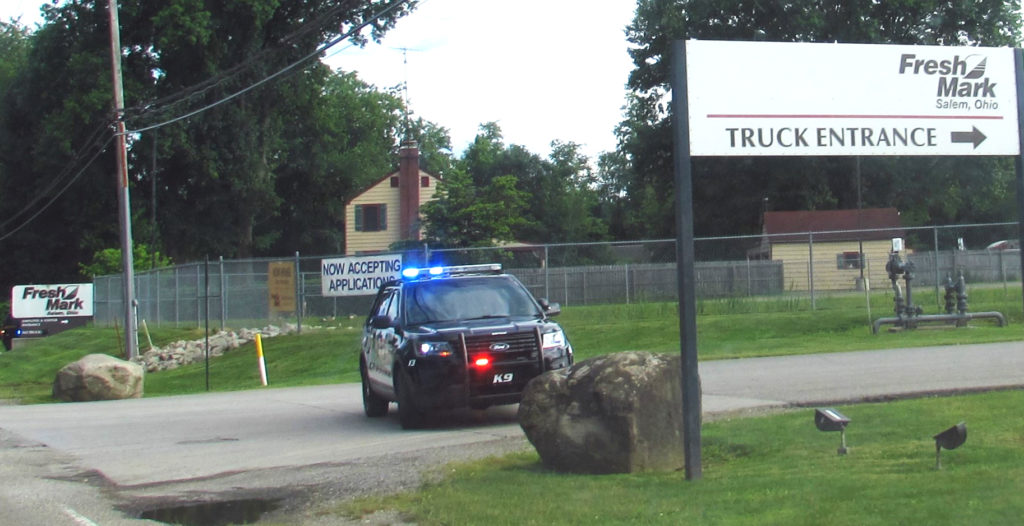 SALEM — One of the city’s largest employers became the site of a large raid Tuesday by federal immigration officials who removed more than 100 Fresh Mark workers by the busloads after arresting them for immigration violations.

A press release issued by U.S. Immigration and Customs Enforcement, commonly known as ICE, detailed the day’s events which began at 4 p.m. and continued into the night as the culmination of a year-long ongoing investigation into the company’s hiring practices, specifically “on evidence that Fresh Mark may have knowingly hired illegal aliens at its meat processing and packaging facility, and that many of these aliens are utilizing fraudulent identification belonging to U.S. citizens.”

The company released a short statement during simultaneous raids on all its facilities, but deferred requests for additional information to Homeland Security, citing the law enforcement nature of the events. The plant in Salem employs nearly a thousand workers.

“We can confirm representatives from Homeland Security Investigations are present in our Massillon, Canton and Salem facilities. We will have more information as it becomes available,” Fresh Mark Director of Corporate Communications Brittany Julian said.

“Unlawful employment is one of the key magnets drawing illegal aliens across our borders,” said Steve Francis, HSI special agent in charge for Michigan and Ohio. “Businesses who knowingly harbor and hire illegal aliens as a business model must be held accountable for their actions.”

There has been a growing Hispanic population in Salem, including residents from Guatemala and Mexico, many who work at the Fresh Mark plant. Local churches have been serving members of the Hispanic community for many years and the police department uses the services of a local interpreter from one of the churches on many occasions when necessary to communicate with someone who doesn’t speak English. The school district has incorporated practices to assist the students they call their English Language Learners.

In 2011, members of the Ohio Valley Tea Party organized a protest outside the plant gates questioning the company’s use of immigrant workers and whether those workers were here legally. At the time, a Fresh Mark spokesman said the company “complies fully with U.S. laws and Immigration and Naturalization Service (INS) regulations regarding the hiring of new employees. Fresh Mark has been in full compliance during numerous routine audits of employee files by the U.S. Immigration and Naturalization Service or INS.”

“Since June 2002, Fresh Mark has participated in the national E-Verify program, which enables us to use an online system to verify the accuracy of new employees’ citizenship information. This is a government program,” the spokesman wrote.

At that time, the plant employed 760 workers. INS no longer exists but the duties are handled by ICE and Border Patrol.

Salem Police Chief J.T. Panezott when contacted said his department was directing traffic and helping Columbiana County Children Services employees at the scene. He said the plant is in the city.

“Anytime any law enforcement action takes place in the city and we’re notified of it, we have to respond and assist any way we can,” he said.

He deferred any additional questions to ICE.

According to the ICE press release, ICE utilizes prosecutorial discretion on cases involving humanitarian concerns, such as health or family considerations, or in some of the cases Tuesday, children who may be waiting at home for their parents, who may be detainees. Several individuals from the Fresh Mark plant in Salem were processed and released from custody the same day as a result of humanitarian considerations. The release said that aliens who are being detained will be transported to a nearby processing facility and placed in removal proceedings. The detentions will take place in facilities in Michigan and Ohio pending the removal hearings.

A 24-hour toll-free detainee locator hotline is available for family members of those arrested in Tuesday’s operation to field questions about detention status and the removal process. The hotline operates in English and Spanish; the phone number is 1-888-351-4024.

In an updated statement, Julian, said Fresh Mark was the first company in Ohio to partner with the Immigration & Customs Enforcement Agency (ICE) in the voluntary IMAGE program (ICE Mutual Agreement between Government and Employers).

“This program between the U.S. government and private employers ensures a lawful workforce. To qualify for IMAGE certification, companies must perform the following requirements: Participate in the Department of Homeland Security’s E-Verify program; establish a written hiring and employment eligibility verification policy that includes internal Form I-9 audits at least once a year; submit to a Form I-9 inspection,” she wrote.

The ICE press release confirmed that Fresh Mark is a member in ICE’s IMAGE program, but added that “IMAGE members are not immune from ICE scrutiny or prosecution for workforce compliance violations.”