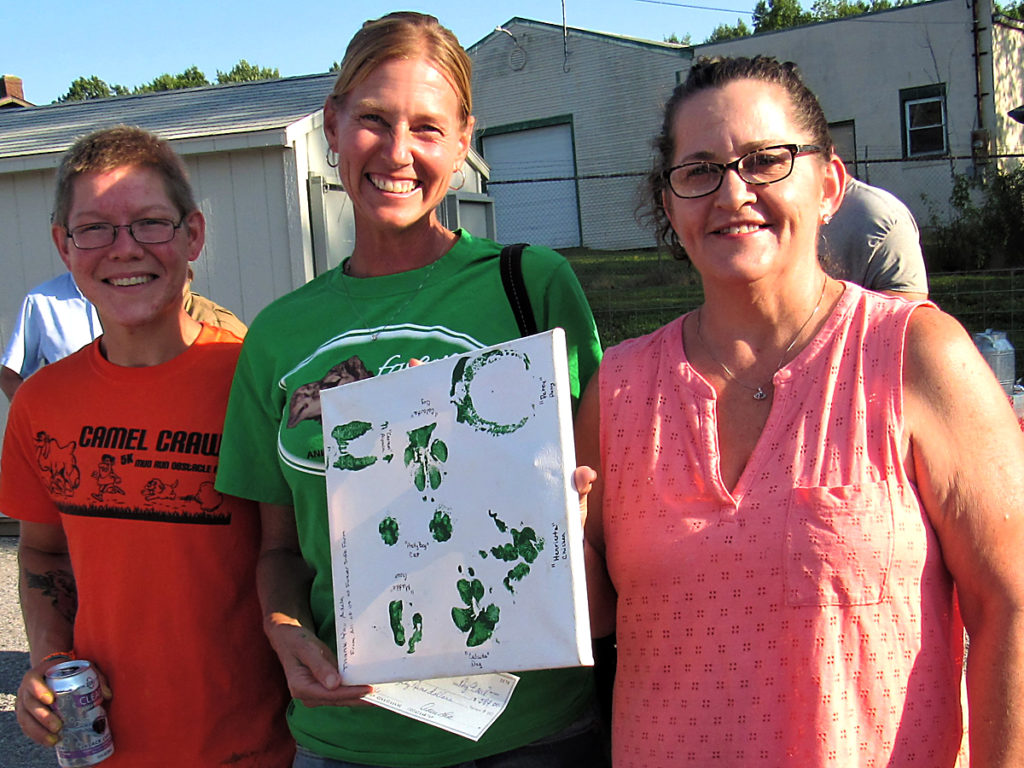 Adele Lake, right, the owner of Adele’s Place at 509 Snyder Road, has to date donated over $45,000 to charities and local non-profit organizations and good causes since June of 2016 when she addd a 50/50 drawing to the weekly Queen of Hearts. She is pictured receiving a gift in return from the Forever Safe Animal Education Center’s Lesley Kerr, center, and Carla Gbur, after presenting the non-profit animal shelter with a check for $589 last month. The money is collected from half of the weekly 50/50 drawings. (Salem News photo by Larry Shields)

SALEM–When Adele Lake presents Dixie Blake with her check for $43,351 Thursday for her Queen of Hearts win on Sept. 6, it will raise the total jackpot money won at Adele’s Place to over $449,191 in three years.

Those are respectable numbers anywhere, but when you consider how small the popular restaurant at 509 Snyder Road in Perry Township is, it adds a little amazement to what has happened there.

And, along with producing jackpot winners, Adele’s Place has regularly donated to local non-profit causes and the accumulated numbers have added up and continue climbing.

As of the last drawing on Sept. 6, Adele’s had donated approximately $45,249, all locally.

It all goes back to June of 2016, months after starting the Queen of Hearts game, when Lake decided to add a 50/50 drawing.

Each week an individual wins half and the other half has been the source for donations to local schools, police and fire departments, hospitals, veterans organizations, animal shelters and just about any good cause that is put in front of her.

In October of 2017, there was a $10,000 donation for an autistic sensory room at St. Paul Elementary School and a few months before that, in June, a $10,000 check was presented to Akron Children’s Hospital.

They’re all her favorites.

The remaining half of the jackpot money, $43,351, will be rolled over into a new jackpot and a new game that will begin in a three weeks, on Sept. 27.