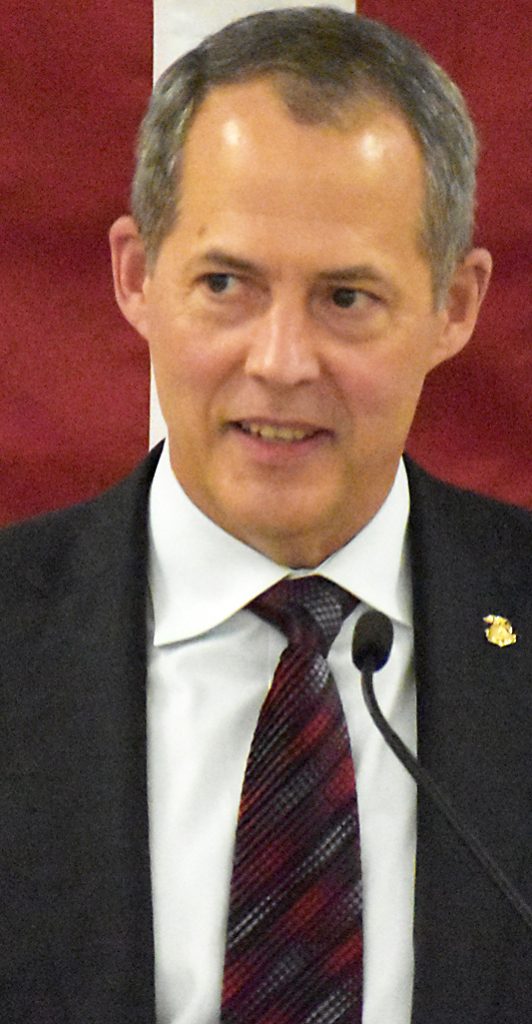 “We all should be very, very proud that we have–and represent–such a wonderful high school,” Daniel T. Moore, SHSAA president, told the 390 people in attendance.

Treasurer Wendy Saltsman reported that the association’s investment portfolio currently exceeds $10.5 million. Since awarding its first scholarship in 1908, the association has awarded more than $7.2 million in scholarships to 2,500 SHS alumni from the portfolio’s earnings. The association offered six new scholarships this year as the result of recent $100,000-plus donations from several people.

For the first time in its history the association gave its Honored Alumnus Award to two people in one year: retired Marine Corps Lieutenant General Robert Ruark and retired Air Force Major General Jay G. Santee. Both were members of the class of 1977 and served with distinction in the military for 36 years and 33 years, respectively.

Both men referred to high school experiences as pivotal to their success as adults.

Ruark, who in his second career as CEO of the Marine Corps Scholarship Foundation, talked about the despair he felt as a high school junior when his performance in athletics and academics was uneven. “The only thing that was consistent was my inconsistency,” he said.

The first time Ruark took the ACT, his score was so low he feared no college would accept him. He also worried that his strict father would be angry. However, instead of reprimanding him Ruark’s father bet him that if he concentrated on academics, he could earn a full college scholarship. His father’s belief in his capability led Ruark to make better decisions and work harder. By spring of his senior year Ruark had earned a Navy ROTC scholarship to Miami University in Oxford, Ohio.

Santee, who in his second career is vice president of Strategic Space Operations at Aerospace Corporation, shared that “tough times” in high school made him want to leave Salem behind when he went to the Air Force Academy in Colorado Springs, Colorado. He later realized that his SHS teachers and coaches had prepared him well for learning throughout his life, that he had made lasting friendships among SHS classmates, and that his family had prepared him to raise a family of his own.

Santee urged students not to avoid doing things that other people say can’t be done.

“If you take on the big things, the hard things that are one in 100 and succeed, they sing ballads about you and they write poems about you. And you’ve already accomplished the biggest thing, which is not letting someone else tell you, you can’t. …”

“Don’t look at the world the way that others would have you see it. Look at it the way you want it to be,” Santee said.

Cardiologist John R. Stratton, M.D., urged the 2019 graduates to pursue “noble careers” in medicine, education and the like that serve others. Stratton, a 1964 SHS graduate, and his wife Carolyn Webster-Stratton, Ph.D., traveled to Salem from Seattle, Washington, for the first awarding of a $10,000 scholarship from the John R. Stratton and Carolyn Webster-Stratton Medical Student Scholarship that they created with a $100,000 donation in 2018.

Early in their careers the couple provided healthcare in rural Alaska. They then became University of Washington professors and researchers. Prior to attending Yale Medical School Dr. Stratton was a Peace Corps volunteer. Not only are both Dr. Stratton and Dr. Webster-Stratton university educators, but their mothers were teachers, their daughter is a teacher, and their son is a physician.

“It’s a fulfilling life of service and I would encourage the class of ’19 to consider something in service. It’s a very good way to spend your life,” he said.

Representing the Class of 1969 as it celebrates the fiftieth anniversary of its graduation, George Spack, a retired SHS history teacher, pointed out that optimism is America’s heritage. “Seniors in no other country will you find as many opportunities to build a quality life as here, especially if you strive to lead a virtuous life, work really hard, and serve others.”

During the association’s business meeting Moore reported that the $425,000 renovation of SHSAA’s office at 330 East State Street would begin in mid-June. The project involves replacement of the façade, stairwells, front foundation and basement to address age-related structural issues.

“This is a solid investment in Downtown Salem and we are excited to get started on this renovation project,” said Moore, who chairs the committee raising funds for the renovation.

— Photos of the respective scholarship winners will be published later this week.