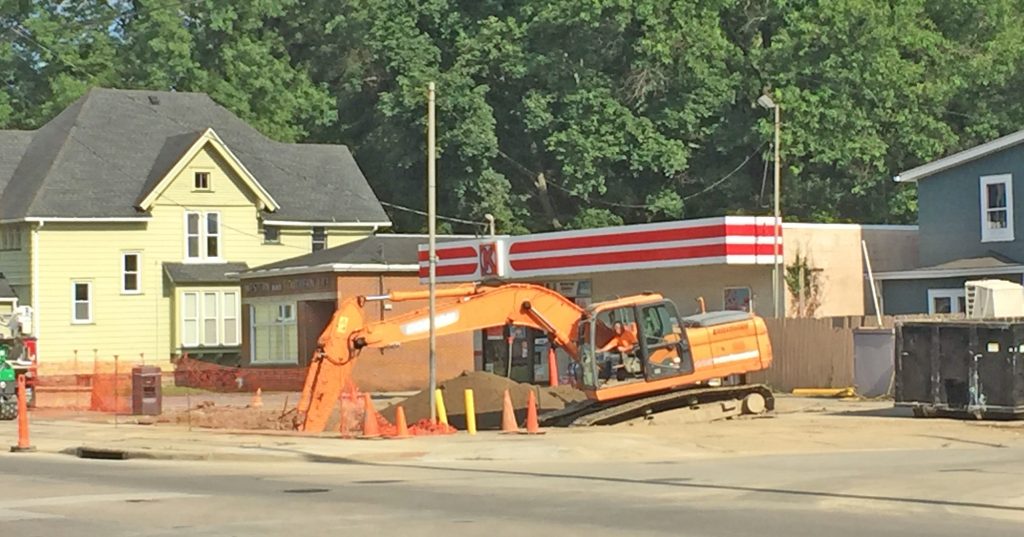 A worker operates a backhoe Tuesday on the Circle K East property at 1125 E. State St. where Salem Fire Chief Scott Mason confirmed the underground gasoline tanks are being removed. Firefighters were called to the site Monday night after workers hit a natural gas line, causing a natural gas leak. No evacuations were necessary, but the store did close temporarily until the gas leak was stopped, State Street and Woodland also were closed briefly until the gas was shut off. (Salem News photo by Mary Ann Greier)

There was no fire or explosion and no need for evacuation of nearby businesses or homes, all facts that the Salem Fire Department pointed out on the department’s Facebook page in order to quell a faulty, inaccurate account of the incident that was spread on social media.

In an interview Tuesday, Chief Scott Mason said the incident was very minor and only involved a 1-inch natural gas line which serviced the store. The store was closed for a short time, along with part of State and Woodland until the natural gas was shut off and the leak stopped.

According to the fire report, Mason called the station at 6:55 p.m. Monday after the contractor called his cell phone about hitting the gas line. The store was checked with a multi-gas meter with all readings normal, but was closed to customers until the gas leak was stopped. The outside area was continuously monitored within the Lower Explosive Limit reading of 12-25 percent at the source of the leak. All other areas were normal readings.

Columbia Gas arrived and shut the gas line off at the curb box. No other businesses or homes were affected by the leak.

The post by the fire department explained how the duty crew responded to the incident at the Circle K on East State Street, noting: “There were some rumors circulated on social media and we want the facts to be known. First, it was a natural gas leak. No explosion or fire occurred. The crew removing the gas tanks hit and broke a small natural gas line with a backhoe that fed the store. Second, due to the small size of the leak there was no need for large scale evacuations. If the leak would have been larger, then the nearby businesses and residences would have been cleared. East State and Woodland streets were closed to traffic as a precaution until Columbia Gas arrived and shut down the line.

“Third, only the duty crew responded to the scene per our policies and procedures. No off-duty personnel were called in or any mutual aid requested. Had the leak been larger and evacuations been needed, then off-duty personnel would have been called to assist and any mutual aid as needed. Since the leak was small, and with Salem Police assisting with traffic control, one engine and two personnel were available to handle any other calls that would have came in,”

The post ended by saying anyone with questions or concerns can stop by the station or call 330-337-3053.

A problem with gasoline seeping into the basement of a home on an adjacent property on Woodland in early April precipitated the decision by the Circle K store owner to have the underground gasoline tanks removed. The issue began as an investigation into an odor of gasoline and the Ohio Environmental Protection Agency and contractors at the scene determined a faulty leak detection valve was the culprit for the gasoline leak on the Circle K East property which affected the neighboring home.

Since then, contractors had been working on cleanup, using a vacuum truck to remove any pooled gasoline and remove any contaminated soil.

The family that had been living in the home was put up in a hotel by the Circle K East owner. Since then, Mason said the company purchased the home from the family. According to Columbiana County Auditor’s Office online records, the property transferred to Mac’s Convenience Stores in May. The house is still being monitored by the environmental contractor hired by the store owner, along with help from store personnel for readings. No gasoline has been sold at the store since the incident.

“As soon as they realized they had an issue, I think they decided to take the tanks out altogether,” Mason said.

The Bureau of Underground Storage Tank Regulations oversees underground gasoline tanks and has been monitoring the cleanup and recently issued the permit for removal of the tanks.