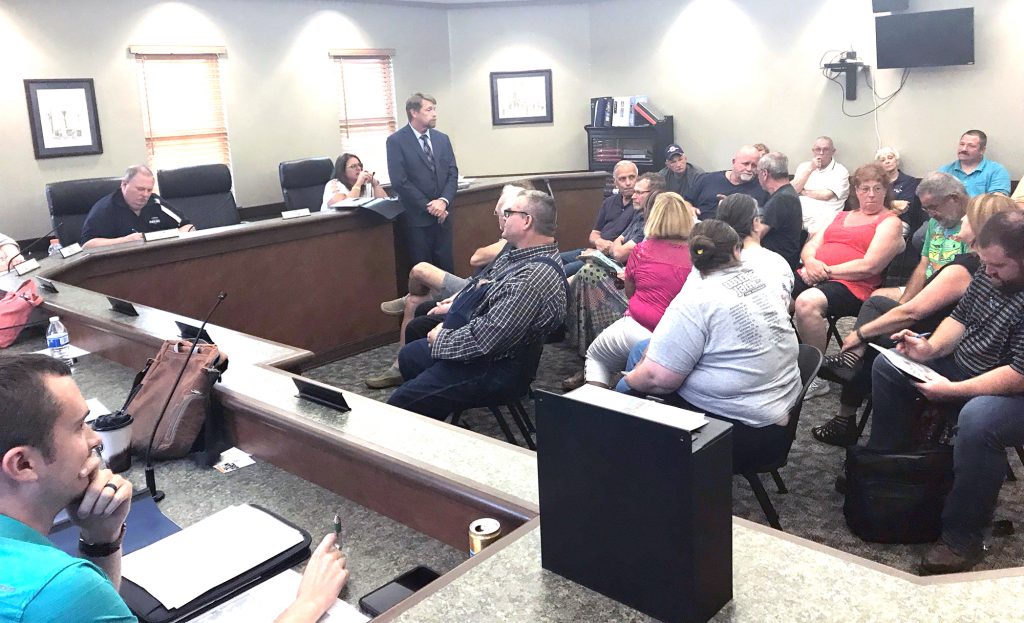 This view is of Moore Street in Lisbon looking south across state Route 154, and it shows where Dollar General is interested in building a new store. Dollar General already has another store a mile and a half away at the north end of town.

Preliminary plans for a new Dollar General on state Route 154 across from Moore Street received a less than warm reception at Tuesday’s Village Council meeting.

Twenty-seven people crowded into council chambers, some of whom were there to voice their opposition to the project as laid out by Dollar General’s representative, Bob Gage of GBT Realty of Brentwood, Tenn.

DG wants to build a 9,100-square-foot store at 740 E. Lincoln Way (state Route 154), just east of Carter Lumber. The site, which is directly across from where Moore Street intersects with Route 154, involves acquiring two homes — a white home and the blue home immediately to the east.

Gage said one of the homes is already under contract to be acquired and the other is expected to soon follow, although a tenant in one of the homes said his landlord indicated that may not happen.

The store is expected to be similar in size to the DG located about 1.5 miles away at the north end of town. While there is typically at least five miles between stores, “they (DG) feel Lisbon would benefit from a second store,” and there is enough population and traffic to support both, Gage said.

This view is of Moore Street in Lisbon looking south across state Route 154, and it shows where Dollar General is interested in building a new store. Dollar General already has another store a mile and a half away at the north end of town.

GBT handles the development end of the project, with DG deciding where to locate new stores based on its own studies. Gage said each store has to generate an estimated minimum of $1.2 million in sales annually. He said the purpose of his appearance before council was to “test the water” because GBT will have to apply for a zoning change since the property is located in an area zoned residential.

The store would employ 10 to 15 workers.

Alisa Hall, who lives across from the property, was the first to express her opposition, saying such a development in a residential area would have negative impact on their quality of life and drive down property values as well.

“I don’t want to sit on my front porch and see a Dollar General,” she said.

Then there is the issue of parking lot lighting, but Gage said the lights automatically turn off an hour after the store closes.

Someone also pointed out traffic going to and from the store would only add to the traffic congestion on Route 154, a busy two-lane that turns into a bottleneck at the Carter Lumber intersection. The lack of a left turning light at the intersection routinely results in traffic backing up to the proposed site and beyond, especially on Fridays.

Mayor Roger Gallo pointed out the Ohio Department of Transportation is expected to make some minor improvements to the intersection next year, including adding a left-hand turning light to alleviate some of the congestion.

West Washington Street resident Dale Hood said the property is a lousy location given it is in a mostly residential area and proximity to a busy intersection. “With all the empty land on 154 you couldn’t pick a better location?” he asked.

Councilman Peter Wilson was skeptical about DG’s plans to keep the other store open, especially since it will soon face “increased competition” from a nearby Discount Drug Mart scheduled to open on July 15.

Gene Krotky from the Lisbon Historical Society pointed out underneath the siding of the blue house is a historical log cabin.

“I’ll certainly take of this back” to DG, Gage said.

Village zoning inspector Zach Barkley said GBT has provided him with preliminary plans and has been advised of variances it needs to comply with the village zoning code.

Leetonia schools projected in the black

LEETONIA – The Leetonia school board Tuesday night approved a five-year financial forecast that shows a positive ...

LISBON — Getting Center and Elkrun townships to join with the village in the routine purchase of six sets of ...

SALEM — City service workers have enough projects to handle in the summer without having to cut people’s lawns, ...