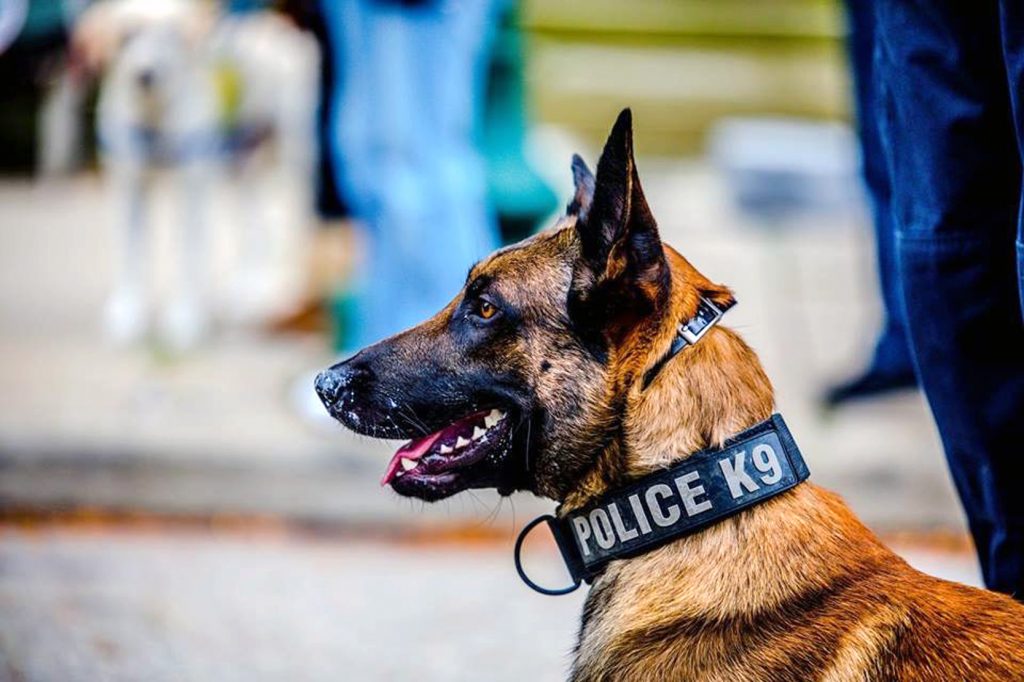 EAST LIVERPOOL — The city’s K-9 Officer Nero bit the hand of a man he apparently perceived as a threat to his human partner, Patrolman Chris Green, Monday evening as they assisted St. Clair Township Police on a traffic stop on state Route 170.

According to St. Clair Patrolman Keith Hilderbrand’s report, he was on routine patrol just after 7 p.m. when he saw a vehicle driven by Ronald E. Boyer, 45, Willison Street, Salineville, on state Route 170 and knew Boyer did not have a valid license. He initiated a traffic stop in the Calcutta Square parking lot, where he approached the car and identified Boyer and his passengers, Robert Center, 47, Bell School Road, and Melissa Rodgers, 50, Bell School Road.

He called for Green to bring Nero to the scene to conduct an open air sniff of the vehicle, during which Green reported Nero alerted to the odor of narcotics. At the same time, Hilderbrand learned Center had an active warrant and took him into custody.

Boyer and Rodgers were asked to step out of the vehicle and officers began searching it, where they reported finding an empty pinch-off bag.

Boyer was cited for no operator’s license and Center was transported to the county jail.

According to Green’s report of the incident, a “makeshift marijuana bowl” was also found in the vehicle and that Boyer admitted having smoked marijuana earlier in the day and said he was wearing the same clothing as when he was smoking. As Nero was sniffing the vehicle, Green reported, he had his cruiser facing the opposite direction blocking the other lane of travel since it was unknown if those in the vehicle had weapons and also to allow him a safer approach for Nero to work.

While discussing his partner’s actions with other officers, Green reported, he was alerted by Hilderbrand of an approaching vehicle coming up behind them, which he said caught him off guard. He said he immediately went toward his K-9 partner, also yelling at the driver to get his attention and trying to get Nero out of the way of the oncoming vehicle.

He reported, “(It was) happening so quickly and, being surprised, (I) was overcome with fear of (my) dog being run over and killed.”

Green reported he braced his hand on the approaching vehicle while trying to grab Nero with his right hand, reporting if not for his actions, “the incident would have possibly had a tragic outcome.”

He was able to get Nero in front of the vehicle which had been stopped by Hilderbrand, out of the path of the oncoming vehicle, whose windshield he slapped in an attempt to get the driver’s attention, he reported, saying that officers yelling at him wasn’t working.

“(I) have been involved in many traffic stops throughout (my) career and have never encountered this scenario,” Green reported, saying he was uncertain if it was an attempt by the oncoming driver to get the officers’ attention so those in the other vehicle could flee, to harm the officers or to harm Nero.

Once the vehicle stopped, Green approached it and said the driver, later identified as Jack L. Desarro, 51, Curry Street, East Liverpool, opened his door and started to exit the vehicle in an aggressive manner without being told to, at which point Green ordered him out. Desarro reportedly became verbally combative, claiming Green broke his windshield when he slapped it to gain his attention. As Green attempted to turn Desarro to the side to be patted down for weapons, he reportedly resisted and reached toward Green, balling up his fist, which is when Nero sprang into action, biting him then quickly releasing him, with Green reporting his partner is trained in handler protection for this type of scenario.

This, he reported, “immediately changed the behavior of the driver from aggressive and non-compliant to compliant,” allowing him to gain control of Desarro’s hands. Green reported he did not find Desarro to be an immediate threat and so turned his attention to his partner, checking Nero for any injuries.

He reported that Desarro told him, “I saw your dog, and there was no one out here to tell me not to go through here. I don’t wanna here that (expletive), man,” later yelling at the officer, “That’s gonna cost ya,” as he took Nero back to the cruiser.

Green reported that Desarro denied drinking any alcohol and officers determined he was not impaired.

Evidence will be reviewed by the prosecutor for possible charges against Desarro, according to reports.

Salem — Milan Alek, 89, Lexington Avenue, Salem, struck the wall while entering the drive through at Gene’s ...

LISBON — Dillon T. Dellapenna, the 23-year-old East Liverpool man who repeatedly was charged in 2018 for ...

NORTH LIMA — A 20-year-old North Lima man was critically injured after being ejected from the vehicle he was ...