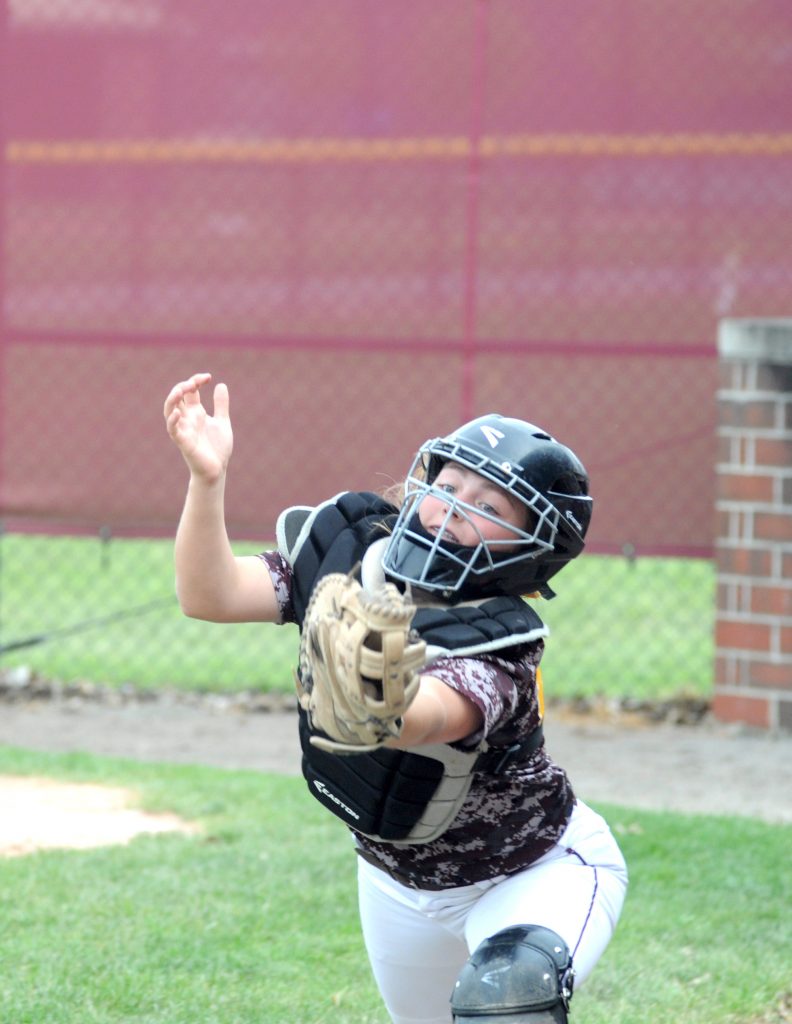 GREENFORD–With their three run lead evaporated and the pressure ratcheting up, the South Range softball team didn’t bat an eye as the Raiders came to bat in the bottom of the sixth inning in Thursday’s Div. III district final against Crestview.

“Everyone still had their heads up, we knew it wasn’t going to be easy,” South Range catcher Jillian Strecansky said. “Everyone was ready to fight back and not give in.”

Strecansky got the job done with a go-ahead sacrifice fly in the bottom of the sixth, scoring Drew Feren as the top-seeded Raiders pulled out a tense 4-3 victory over the third-seeded Rebels at South Range High School.

The Rebels staged a gutsy three-run rally to tie the game in the top of the sixth, but find themselves eliminated with a 22-7 record.

For the Raiders, top-ranked juggernaut Champion awaits in a regional semifinal matchup at 5 p.m. Wednesday at Massillon Washington High School.

“Our girls don’t give up,” South Range coach Jeff DeRose said. “After being up by three like we were, you tend to let your guard down a little, but I give our girls a lot of credit for how they responded after Crestview tied it.”

With momentum appearing to favor the Rebels, Drew Feren led off the South Range half of the sixth by lining a single to right. Following a Bree Kohler walk, Hanna Dennison sacrificed the runners to second and third.

Strecansky came up and lofted a shallow fly ball near the left field foul line. Feren aggressively dashed for home and just slid under the tag to put the Raiders back on top.”

“I was just glad that it worked out,” Strecansky said. “I love this team and all the seniors and I don’t want this season to end.”

“Drew isn’t the most fleet-footed runner, but I have so much confidence in (third-base coach) Donee (Feren) and I knew he was going to take the risk in sending her,” DeRose said. “It was a close play, but I’m glad he did it.” 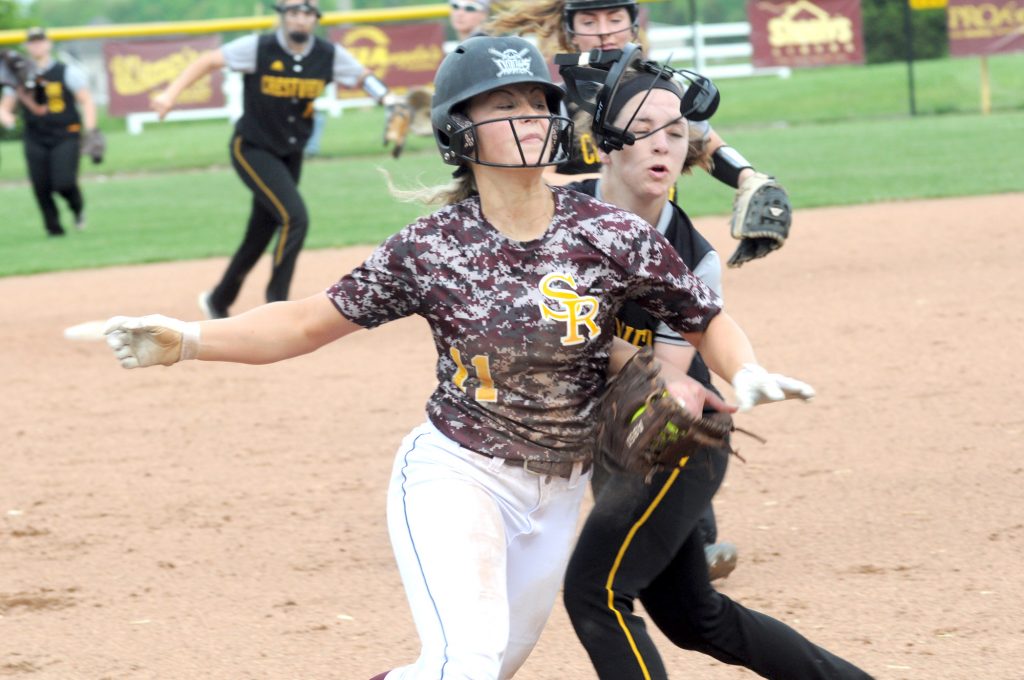 With her lead restored, Kohler trotted back out to the circle and retired the first two hitters.

Senior Olivia Strank kept the Rebels alive with a two-out single, but Kohler got Sutton to ground out to Maddie Helon at second to seal the district title.

“I wasn’t really nervous after they tied it, I knew it was going to be a hard-fought game,” Kohler said. “We work together so well as a team that I was confident we would get it done.”

For the first 5 2/3 innings, Kohler was working on a no-hitter and the Raiders looked to be in firm control with a 3-0 lead.

With two-outs and nobody on in the top of the sixth, the Rebels showed they weren’t going down without a fight. 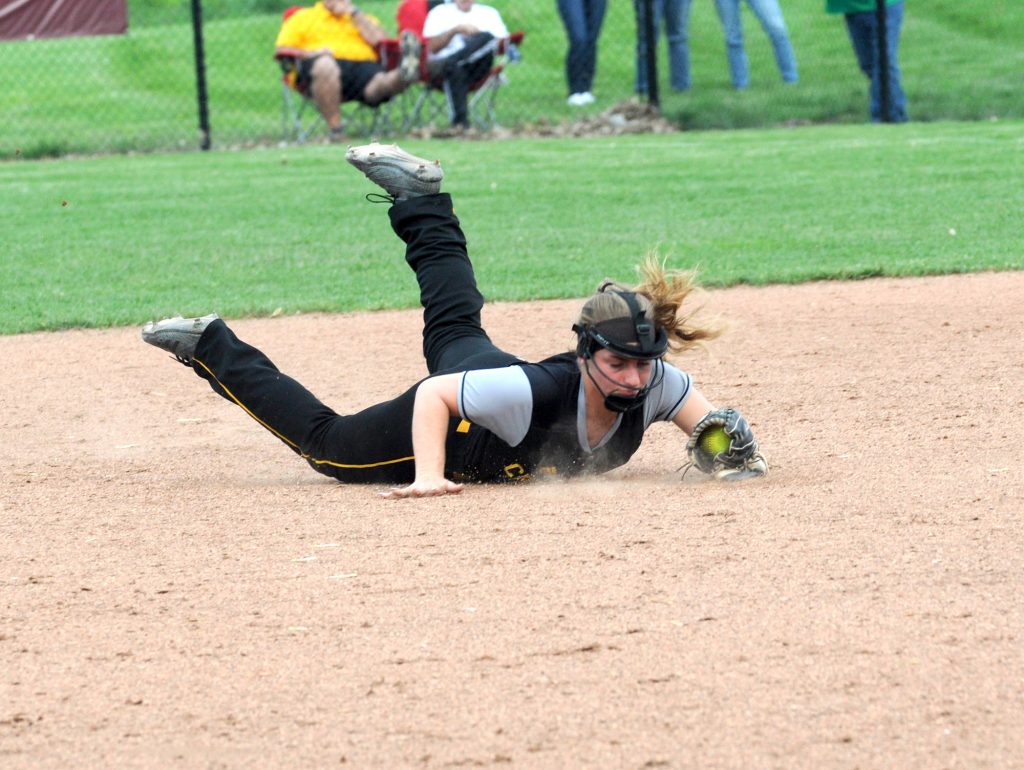 Three straight singles by Kaedyn Sutton, Karsyn Moore and Skyler Mattern broke up the no-hitter and made it a 3-1 game. Rightfielder Baylie Bettura was up next and launched a double off the fence in left, tying the game at three and giving the Rebels new life.

“That’s two seniors (Mattern and Bettura) who weren’t ready to go home,” Crestview coach Greg Eskra said. “That’s the attitude the whole team has had all year, they never give in.”

South Range scratched out a run in the top of the first when leadoff hitter Marlaina Slabach reached on a bunt single, was sacrificed to second and scored on a throwing error.

The Raiders made it 3-0 in the fourth when Feren and Kohler both reached on errors and scored when freshman Reagan Irons lashed a two-out, two-run single to left.

“I was just looking to put the ball in play,” Irons said. “It was amazing to be able to help the team in a big game like this. I’m so excited to keep playing, I didn’t want it to end tonight.” 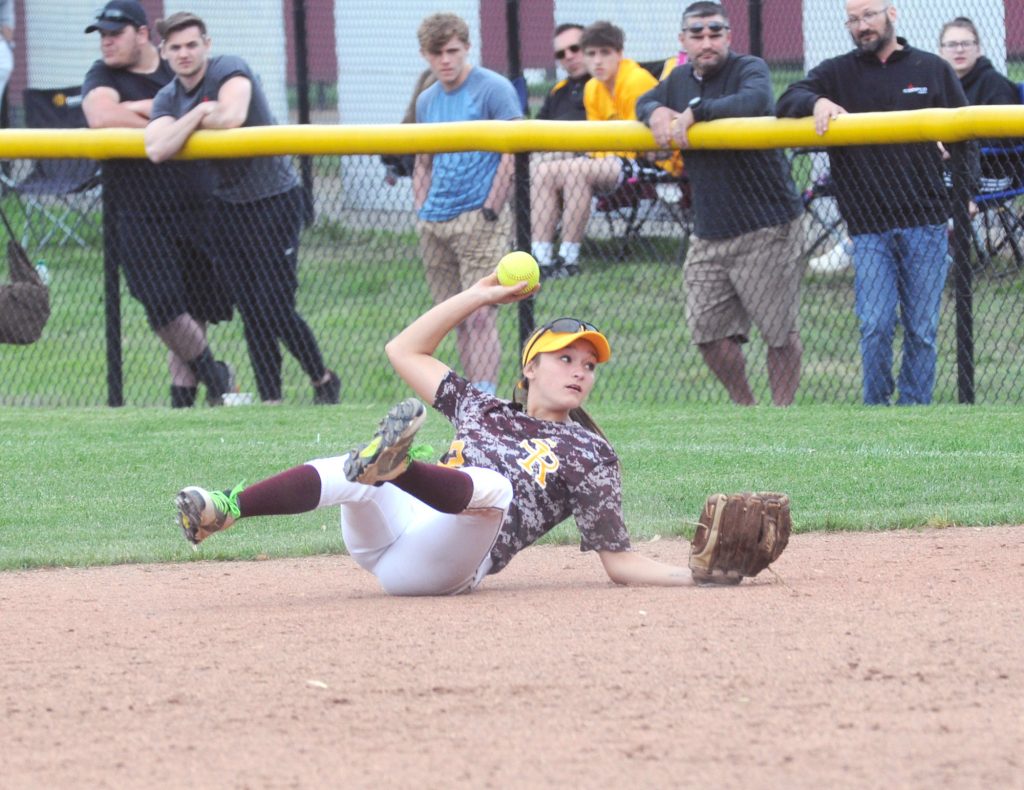 At the end, Eskra was left lamenting the miscues that led to South Range’s first three runs.

“You can’t give a good team extra outs,” Eskra said. “I think we were matched pretty evenly, but the mistakes cost us.”

After being favored all the way through the district round, the Raiders will be the prohibitive underdogs Wednesday against the two-time defending state champion Golden Flashes.

During the post-game talk, DeRose sought to inspire his team by pointing out to their 2016 state runner-up banner, when a regional semifinal upset over Champion helped propel the Raiders to the title game.

“Now we have to get ready to face probably the best team in the state,” DeRose said. “They’re a great team, but we’ve beaten them before and we can beat them again.”

• Thursday’s win was the sixth district title in program history for the Raiders.

“I’m so proud of these kids for getting to this stage,” Greg Eskra said. “These girls played their hearts out. It would have been nice to be on the other side, but hats off to this team for everything they gave this season.”

• Kohler now has the South Range single-season record with 44 hits. The old mark belonged to Kristin Robinson with 42 hits in 2011.

• DeRose said the Raiders will try and pick up a tune-up game on Monday to stay fresh.

• The Rebels will actually play Champion before the Raiders do. Crestview hosts the Flashes in an AAC Blue Tier makeup game today to close out the season. 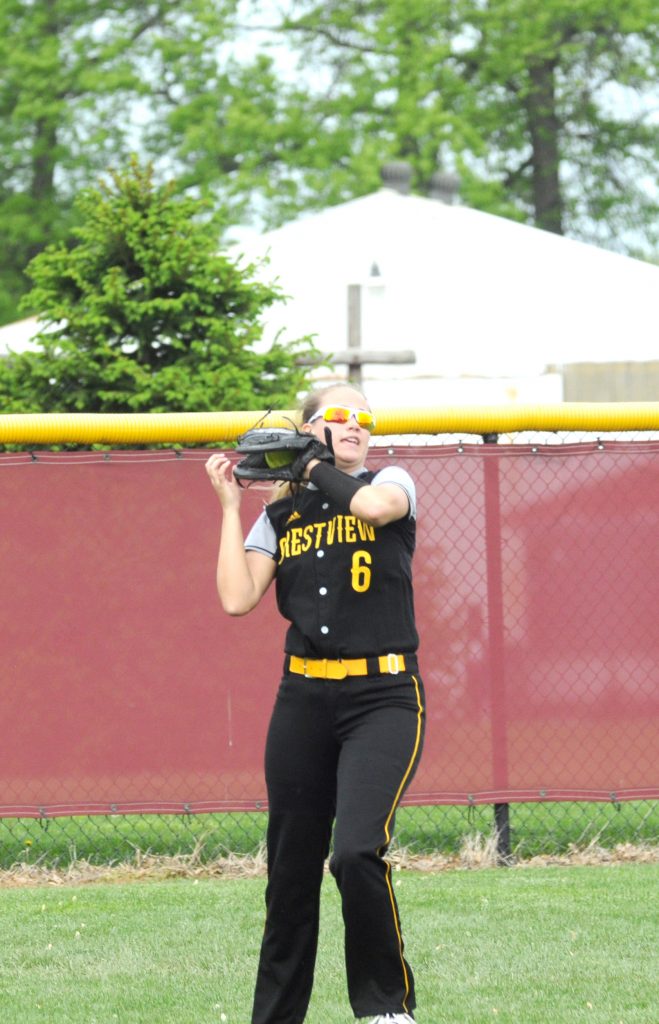 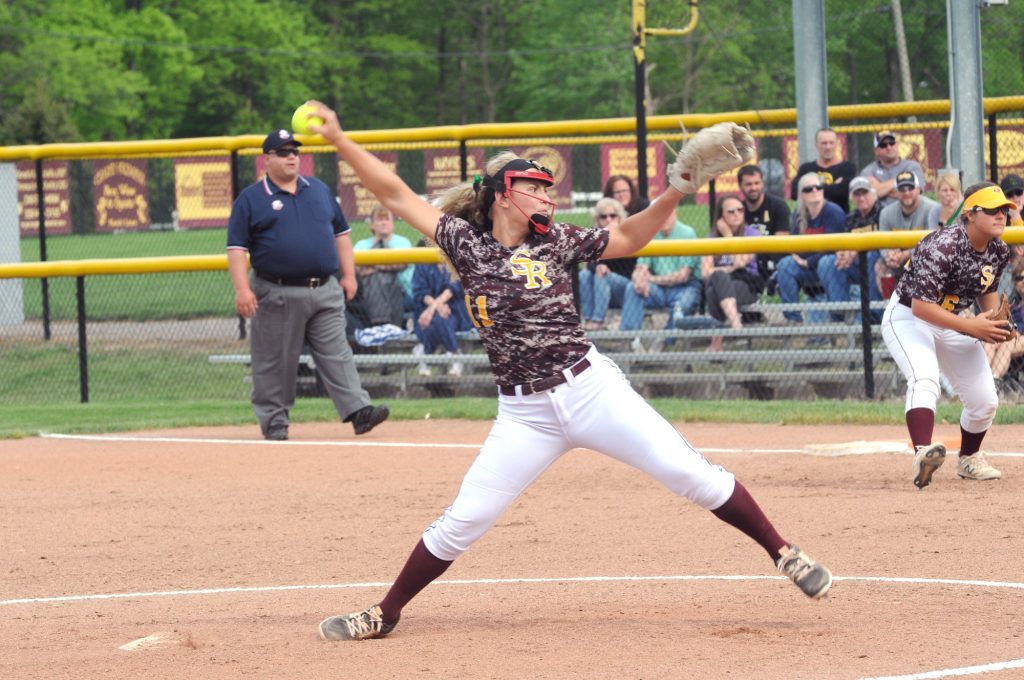 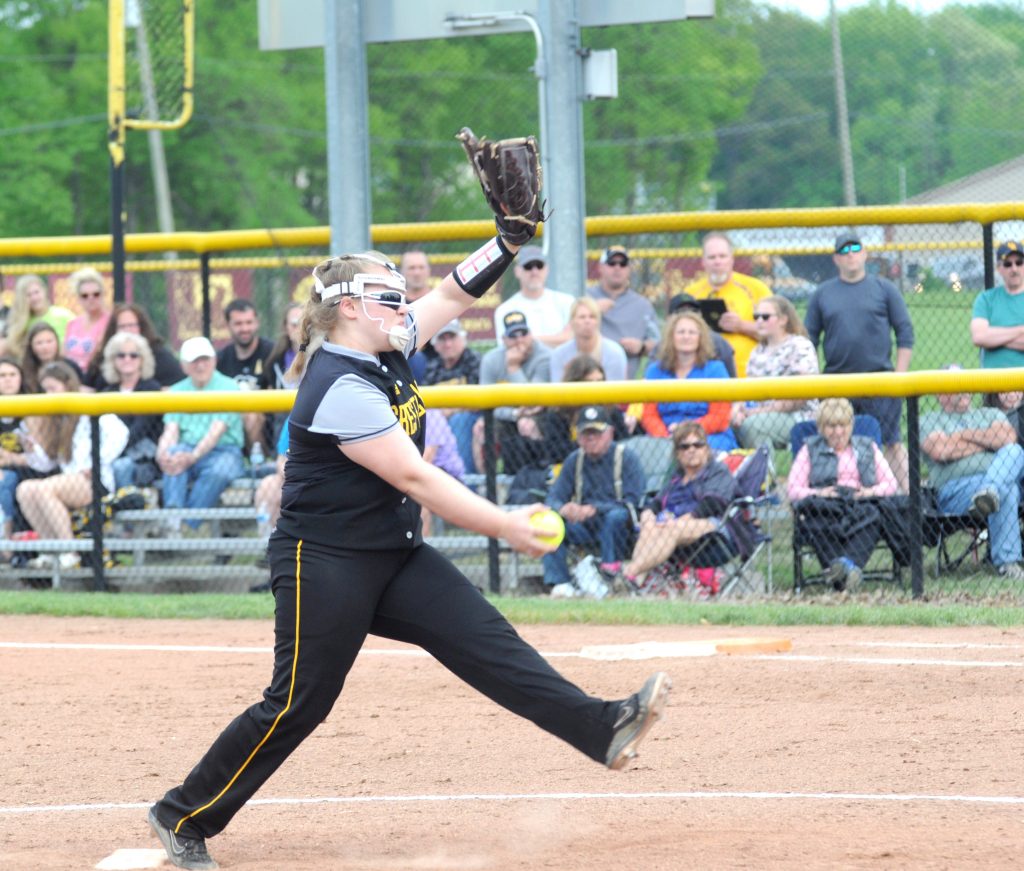 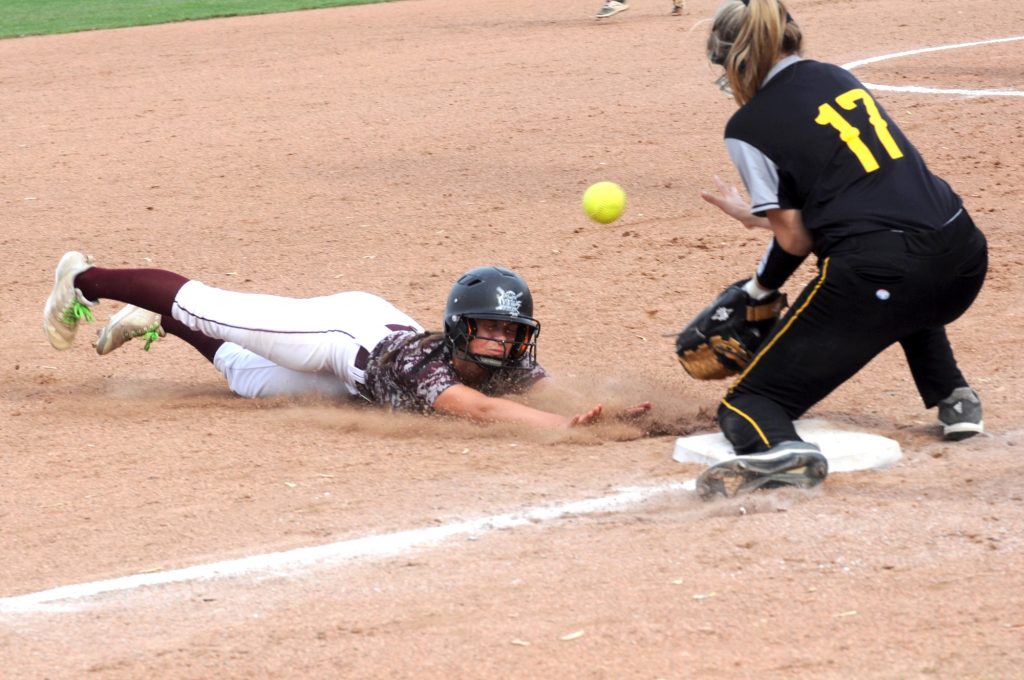 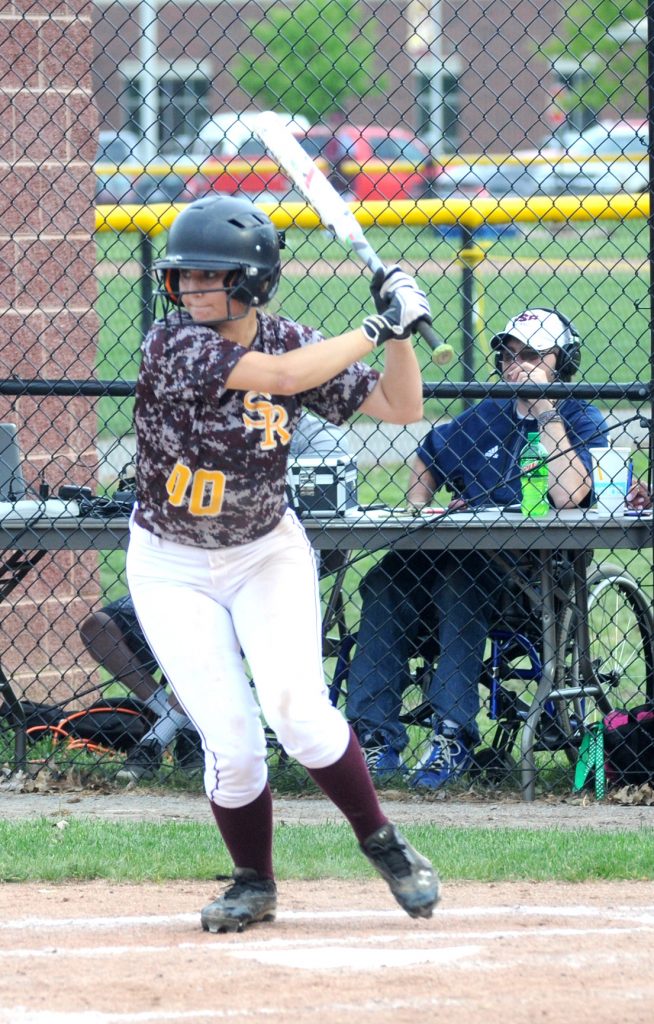