A dream game for Cleveland 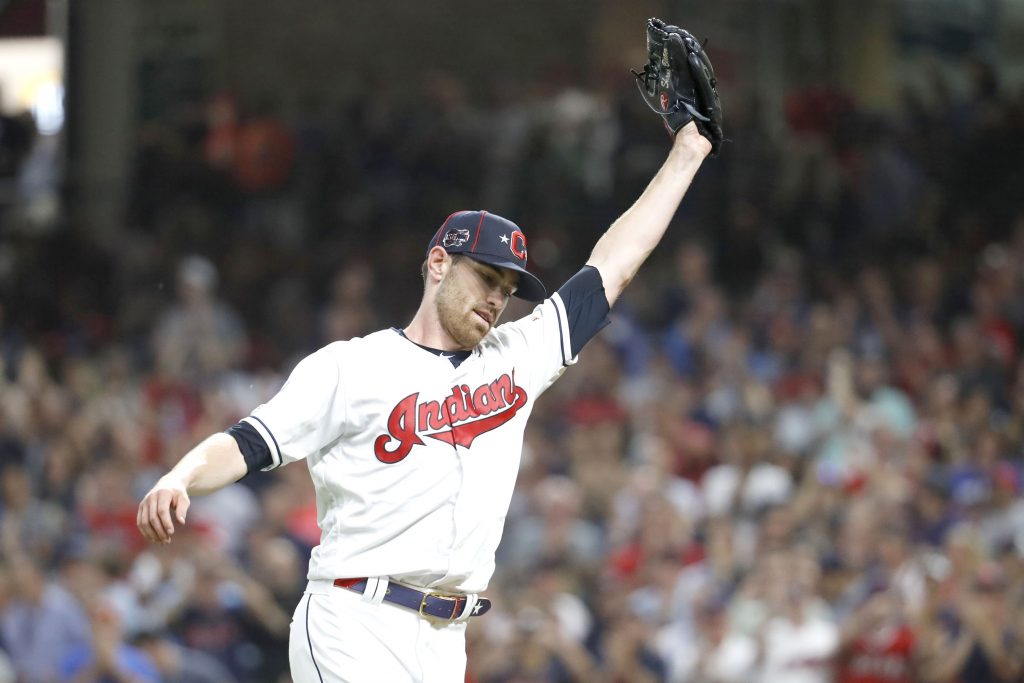 American League pitcher Shane Bieber, of the Cleveland Indians, reacts after striking out National League's Ronald Acuna Jr., of the Atlanta Braves, to end the top of the fifth inning of the MLB baseball All-Star Game, Tuesday, July 9, 2019, in Cleveland. (AP Photo/John Minchillo)

A day after an awesome Home Run Derby got baseball buzzing even more about monster shots, only a couple balls flew out of Progressive Field at the All-Star Game on Tuesday night.

Instead, Verlander blazed 97 mph heat from the start, Bieber struck out the side and the AL staff combined to fan 16, topping a loaded NL lineup 4-3 for its seventh straight win.

With fans hoping to see a replay of Monday’s jaw-dropping aerial show when 312 homers cleared the walls, the diamond became a pitchers’ paradise — at least until the late innings.

Derby champ Pete Alonso of the Mets grounded a two-out, two-run single past Gleyber Torres in the eighth to close the NL’s gap. After a double steal put runners at second and third against Cleveland reliever Brad Hand, White Sox catcher James McCann made a tumbling catch on Mike Moustakas’ twisting foul pop to end the inning.

Aroldis Chapman threw a perfect ninth to give the AL its 19th win 22 games, with a tie stuck in there. Chapman got a little encouragement with two outs — Yankees teammate CC Sabathia, honored this week for his contributions on and off the field, strolled to the mound to talk to the flamethrower.

Chapman then struck out Yasmani Grandal for a save, giving the AL an overall 45-43-2 lead in the Midsummer Classic.

No need, either, for the experimental rule that was set to go effect: If the game went into extras, each team would start the 10th with an automatic runner on second base.

Major League Baseball is on a record-shattering pace for homers this season, but no one came close to clearing the walls until Charlie Blackmon connected in the NL sixth. Texas’ Joey Gallo countered with a solo drive in the seventh.

Still, it was a far cry from last year’s All-Star Game that featured a record 10 home runs.

Instead, Cleveland favorite Michael Brantley had an early RBI double off losing pitcher Clayton Kershaw, Jorge Polanco drove in a run with an infield single and another scored on a double-play grounder.

Winning pitcher Masahiro Tanaka, Lucas Giolito and Shane Greene did their parts to protect the lead with scoreless innings, shutting down Christian Yelich, Cody Bellinger and the rest of the NL boppers.

Bieber earned the MVP award in front of his home fans, striking out Willson Contreras, Ketel Marte and Ronald Acuna Jr. in the fifth.

Fittingly, the first batter of the game was the guy who leads the majors in home runs — Yelich, the NL MVP with 31 homers at the break, hit leadoff for the first time this year.

Yelich lined out and Verlander, featuring 97 mph heat, quickly fanned Javier B’ez and Freddie Freeman to finish his work. Those juiced balls that Verlander is complaining about? Didn’t bother him a bit.

Baez came up again in the third with a bright red bat, stepped out of the box and playfully waved to his pal Francisco Lindor in the AL dugout.

Pittsburgh slugger Josh Bell was part of the youngest starting lineup in All-Star history, with the NL crew averaging under 26 years old.

Overall, there were 36 first-timers, a number boosted by the absence of Bryce Harper, Manny Machado, Jose Altuve and several past perennials. And consider this: Of the 16 AL pitchers on the 2017 All-Star roster, zero made the roster this year.

All players wore a uniform patch with No. 45 to honor late Angels pitcher Tyler Skaggs. Los Angeles teammates Mike Trout and Tommy La Stella switched their jerseys to Skaggs’ number, and there was a pregame moment of silence.

Commissioner Rob Manfred insists Major League Baseball did not make a deal with the Cleveland Indians about banning their contentious logo, Chief Wahoo.

The club agreed to remove the hotly debated, smiling caricature from its caps and jerseys starting this season, a decision that came after Cleveland was awarded the 2019 All-Star Game.

The timing was curious, but Manfred said there was no link between the two.

“The All-Star Game was awarded to Cleveland by Commissioner (Bud) Selig before I even had one conversation about Chief Wahoo,” Manfred said. “You can write that as fact.”

Although Wahoo, which has been around since the 1940s, is no longer on the field, the mascot is as popular as ever as fans continue to wear all kinds of merchandise bearing his image.

The regular season resumes on Thursday night with one game, Houston at Texas. All teams are back in action Friday. … Next year’s All-Star Game is at Dodger Stadium for the first time since 1980.

HANOVERTON — Ever since his playing days as a point guard at United Local High School, Jason Thompson always ...