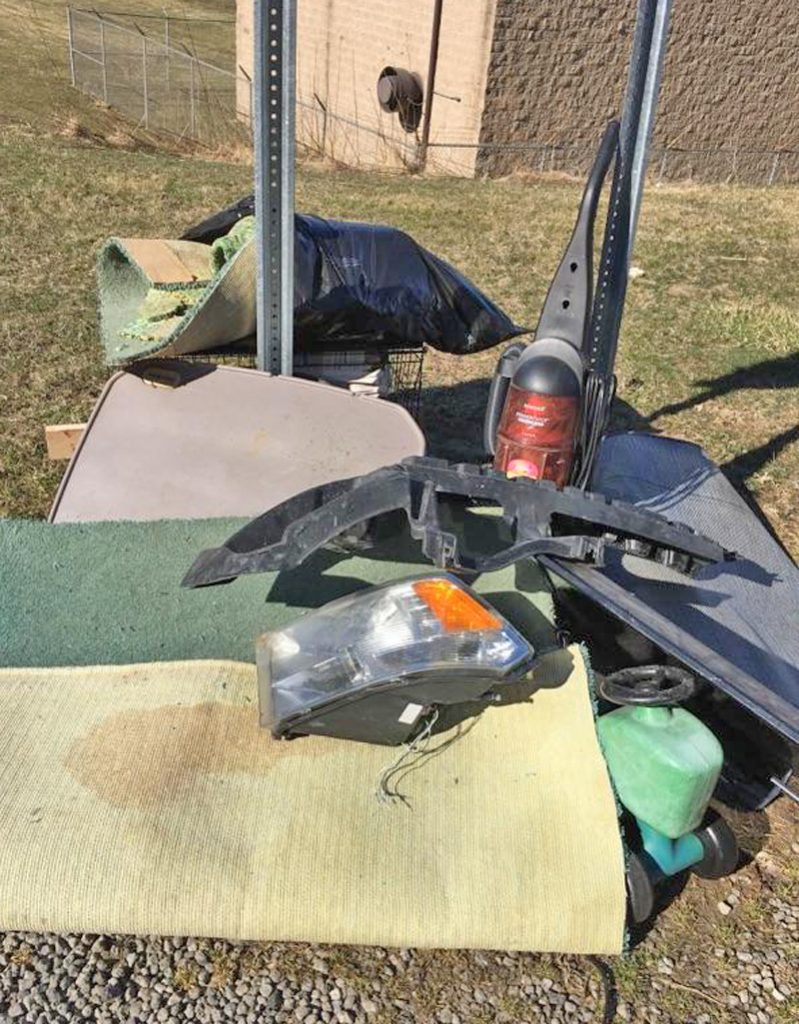 Junk like this was pulled from the recycling containers in Elkrun. (Salem News photos by Tom Giambroni)

The recycling dumpsters are being pulled from the Elkrun Township site on state Route 154 after dead animal remains were found in there for the third time in recent months.

“This time we couldn’t get it out, so it ended contaminating the entire load,” of recyclables, said Barbara Walton, director of the Solid Waste District for Columbiana, Carroll and Harrison counties.

Clearly, dead animals are not among the listed items that are recyclable, but that did not stop someone from tossing a dead sheep in the dumpster-like containers. The second time, the remains of a deer were found inside a dumpster. Both times, SWD staff was able to remove the carcasses and recycle most of what remained in the containers.

On Tuesday, a SWD truck showed up at the Elkton site to empty the containers and found sheep and goat carcasses inside that could not be removed. This resulted in the entire container contents having to be disposed of at a solid waste landfill at an additional cost to the SWD.

“We did not do this without a lot of thought, but when it’s contaminating our entire load then you have to take action,” Walton said. “This was the last straw.”

The recycling site was located on county property. Walton informed Elkrun Township trustees in the fall this was a possibility if the problems continued.

Contamination has long been a problem since the SWD’s voluntary recycling program began in the 1990s, but she said it has increased significantly since the 2013 decision to allow people to co-mingle their recyclables instead of continuing to dispose of them in separate containers.

“I would love to go back to that but I don’t think we can teach the people (to separate recyclables). They can’t follow the rules now,” Walton said. “You can educate, educate, educate, but some people just don’t care.”

Elkton was a problem site long before the farm animal and deer carcasses began showing up, with people using it to dispose of materials and items — mattresses, drywall, car parts, TVs, furniture, carpeting, small appliances– that have to be taken to a landfill. “Ninety percent of what we’re getting was not recyclable,” she said.

The SWD is keeping a close eye on the recycling drop-off site in Rogers and, to a lesser degree, the one in East Palestine as well because they are starting to see the same problems there. “It’s ridiculous. We only accept what’s written on the front of the containers,” Walton said.

There are 56 recycling drop-off sites in the county. Elkton is the second that has been pulled because of repeated abuse by the public. The other was in East Liverpool near the Jennings Randolph Bridge, but another site was later opened at the city street department garage. Walton said problems are now occurring there as well.

The SWD has surveillance cameras it can move to problem sites to catch offenders. Walton said they have successfully prosecuted several cases with the help of St. Clair Township police after people were caught disposing of non-recyclables at the drop-off site behind the Calcutta Giant Eagle. The one offender caught on camera disposing of a mattress spent a day in the county jail, was fined $250 and ordered to reimburse the SWD the cost of hauling away and disposing of the mattress.

Stuck in a cycle caring for self, mom

Man gets probation for assault on EMT