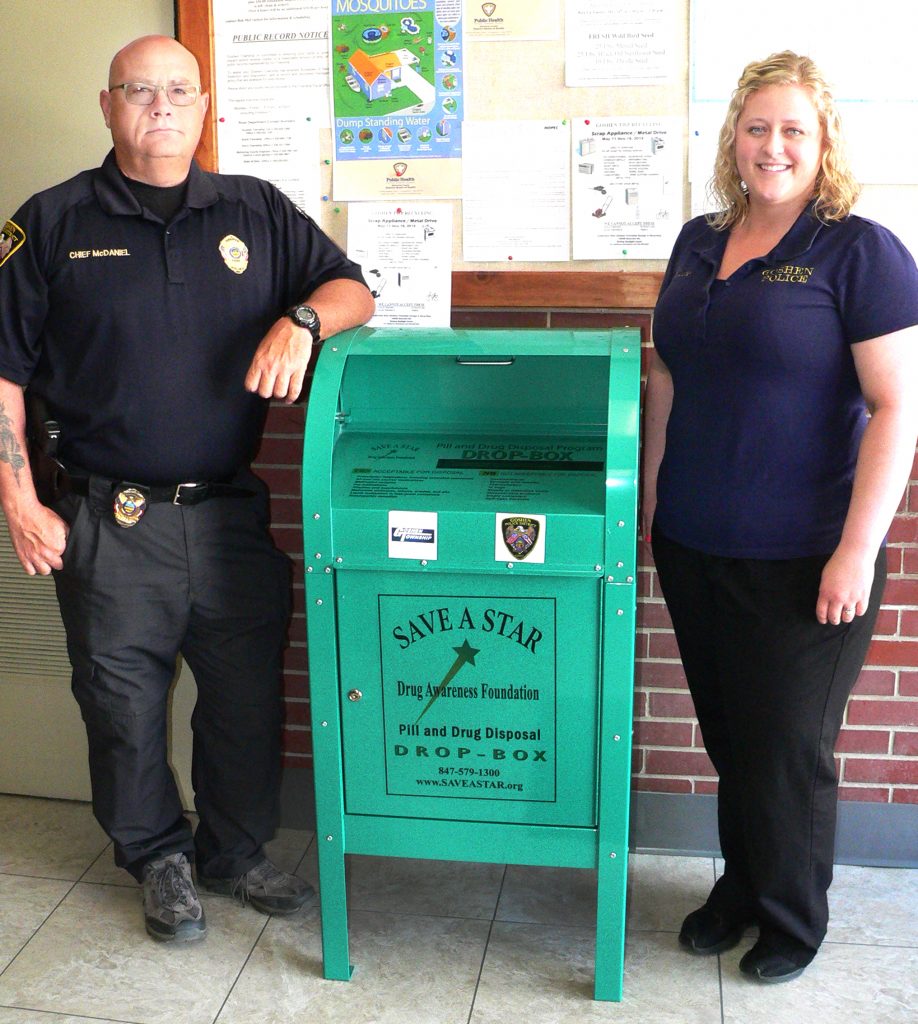 Goshen Police District Chief Steve McDaniel, left, and desk officer Katie Osberg display the new drug disposal box in the station’s front lobby, part of a program in partnership with the Save A Star Drug Awareness Foundation. People can drop off unwanted medications with no questions asked. (Salem News photo by Kevin Howell)

The department installed the drop box this week in the front lobby to collect and safely dispose of unwanted and unused medications, keeping them out of the hands of individuals who might otherwise become victims of prescription drug abuse. The department partnered with David Katz of Save a Star Drug Awareness Foundation to get the box for free after previous estimates indicated a cost of $1,500.

Items can be dropped off between 8 a.m. to 4 p.m. Monday through Friday. Anyone dropping off items after hours should call dispatch at 330-332-0547 Ext. 1 and ask for an officer to witness the drop off.

The box is in a secure environment within view of security cameras.

McDaniel said the program is a way to give back to the community while helping stem the opioid crisis.

“A lot of older people die and their family is left with their medications,” McDaniel said. “[Family members] can’t just dispose of the medications in a waste basket. If (the drop box) prevents just one person using drugs they find in a house, then it’s worth it. A lot of opioid overdoses are from medications found in the family home.”

To make donations in support of Save A Star’s Drug Disposal program or for more information visit SAVEASTAR.org or call 847-579-1300 Ext. 146. Save A Star Drug Awareness Foundation is a registered 501c3 public charity.

Columbiana County’s confirmed cases of the coronavirus took a major jump from Sunday to Monday. According to ...

COLUMBIANA — In March, the planning commission held a public hearing regarding the ongoing issue of Hippley ...

LISBON — This summer marks the 75th anniversary of the end of World War II, and the Lisbon Historical Society is ...