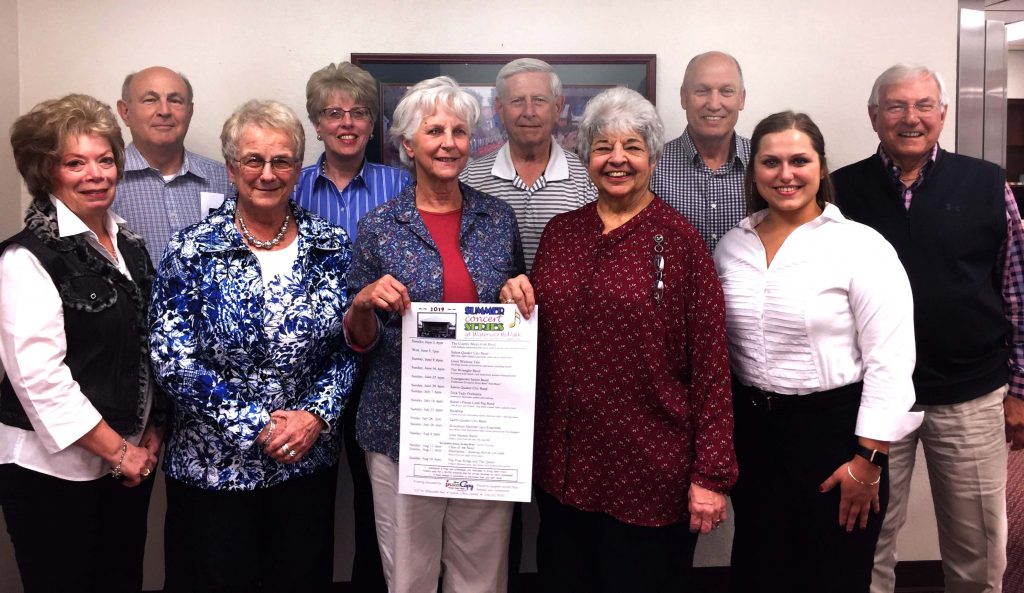 All concerts at Waterworth Memorial Park and all free

SALEM — This year’s Summer Concert Series includes a pair of new bands, some old favorites and groups playing music to please many a listener, whether it’s jazz, big band, country or old time rock and roll.

The 14-concert series kicks off at 6 p.m. June 2 with the County Mayo Irish Band, featuring Irish ballads, American folk music and Scottish and Canadian songs and continues all summer long, wrapping up at 6 p.m. Aug. 18 with The Four Kings and The Queen, featuring blues, Motown, jazz and classic rock.

Dubbed the best free entertainment in Salem, the concerts take place at 6 p.m. on Sundays at the Orashan Memorial Civic Center at Waterworth Memorial Park.

Parking is available off of Sunset Boulevard from North Lincoln Avenue. New this year is paved parking close to the band shell. Concert-goers need to bring their own lawn chairs.

The only exceptions to the Sunday schedule include 7 p.m. June 5, which is a Wednesday, and 7 p.m. July 26, a Friday, which are two of the three dates headlined by Salem’s own Quaker City Band playing patriotic and concert band music, marches and light classics. Attendees can get pumped up for the July 4 holiday when the Quaker City Band plays at 6 p.m. June 30, the band’s only Sunday appearance.

A concert committee announcement about the new schedule explained that the Salem Parks Department improved the parking for this season by asphalting and lining designated parking areas by the tennis courts “and adding a walking lane for those with walkers to easily access the lawn area. The committee is also pleased to have once again acquired two golf carts to transport handicapped and those with walking difficulties from each parking area to the concert venue.”

“We’re trying to assist those that are having trouble walking,” Parks Commission Chairman and committee member John Panezott said.

Salem High School Alumni Night on Aug. 11 features double the pleasure with two bands featuring some SHS alumni. The Class of ’66 Band starts the celebration at 4 p.m., then Manhattan with Rich and Lori Juhn takes the stage at 6 p.m.

The committee press release said Debbie Cappa will bring her food truck to each concert to provide food and soft drinks. There also will be a 50/50 drawing along with prizes from local businesses.

Generous donations make the free concerts possible. Individuals and businesses can donate to the Summer Concert Fund, which is an endowed fund held at the Salem Community Foundation, a 501(c)(3) charitable organization.

Printed schedules are available throughout Salem and at Giant Eagle, Consumers Bank, the Salem Area Chamber of Commerce and the Salem Public Library and at each concert, as well as being featured in the Salem News calendar.