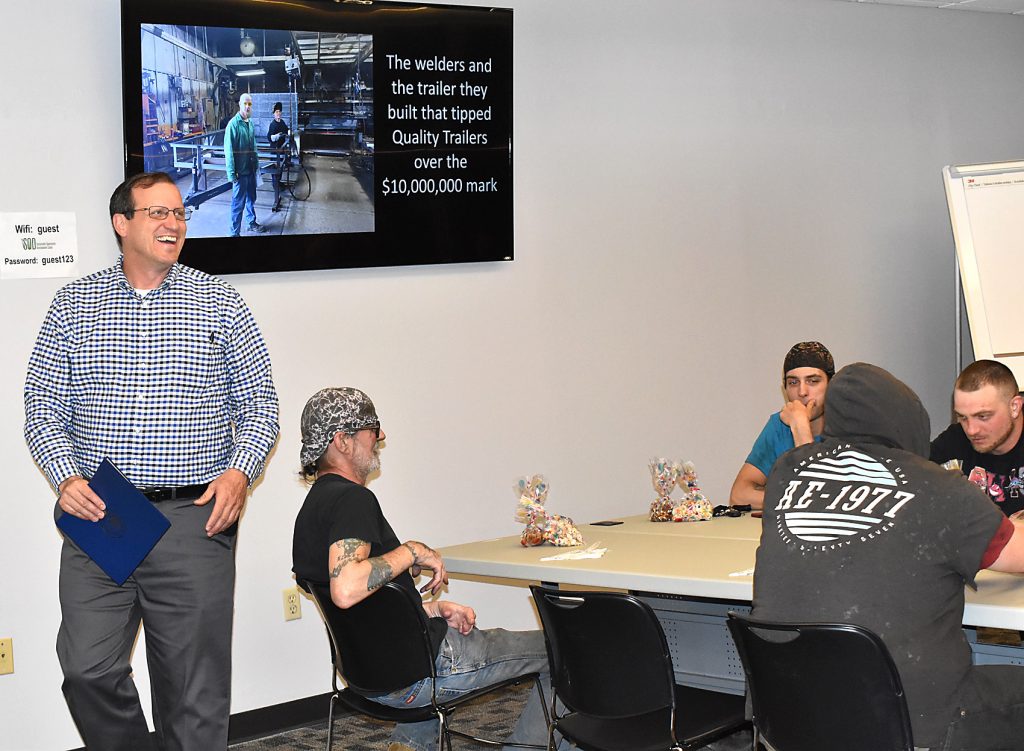 Quality Trailers President Tim Troyer is all smiles during a luncheon Wednesday for workers to celebrate the Salem firm’s feat of surpassing $10 million in production this fiscal year. Behind him is a photograph of workers at the moment the record production number was hit. This is also the company’s 20th year in Salem. The luncheon was held at the Sustainable Opportunity Development Center. (Salem News photo by Mary Ann Greier)

SALEM –Nobody knew how many welds led to Quality Trailers surpassing the $10 million manufacturing mark, but company President Tim Troyer credited the employees.

“We’re a team. We all need each other to make it work,” he said Wednesday.

The company located in the Salem Industrial Park celebrated it’s new production record with a luncheon for the 40 full-time workers who pulled it off, treating them to a catered meal at the Sustainable Opportunity Development Center. One by one, Troyer recognized each department, including the office staff, the welding and parts guys, the paint department and the finishers, stackers and drivers.

“This is a thank you to the employees, obviously couldn’t do it without them,” he said.

By the time the fiscal year comes to a close at the end of this month, they’ll likely end with $10.6 million in production. Since Troyer first came to Quality Trailers three-and-a-half years ago, he said one of the goals of the owners was to get past $10 million and they’ve steadily reached toward that goal with $7 million the first year, more than $8 million the next year and $9.6 million last year.

The company optimized what they had and he said he’s looking forward to continued growth.

Not only is the open trailer manufacturer celebrating increased production, but this year also marks 20 years in Salem, since first locating here in the fall of 1999. Mayor John Berlin declared Wednesday as Quality Trailers Day in a proclamation he read to employees, asking how many welds equate to $10 million in production in a year. That’s a lot of welding wire.

“Congratulations to all of you,” he said.

According to Troyer, Quality Trailers manufactures three types of open trailers, including landscape trailers, car haulers and equipment trailers, building an average of 90 trailers per week and operating with one shift. The company sells to a network of dealers in Ohio and Pennsylvania and throughout the Northeast and Midwest. One of the local dealers is Bennett Trailer Sales on West Pine Lake Road.

“Quality Trailers has experienced rapid growth over the last four years, increasing production over 50 percent during this period. We have added to our dealer network, and sales growth has kept pace with the increased production capacity,” a company press release said, also noting, “We are proud to be part of the Salem community, building a quality product for our customers, and providing jobs for our employees.”

Julie Needs, executive director of the SOD Center, was all too happy to offer up the training room for the luncheon when approached by Troyer. In addressing the employees, she recalled her tour of Quality Trailers and how impressed she was with the teamwork she witnessed.

As someone who is constantly promoting Salem and working to bring jobs to the city through her economic development efforts on the city’s behalf, Needs praised the company’s commitment to being a part of Salem and growing their business here. She said the SOD Center is very proud to see the success in Salem and celebrate it.

“I think it’s fantastic for a Salem company to be recognized for this accomplishment and achievement,” she said.

“The effort the more than 40 full-time employees put in year-round to produce an average of 90 trailers per week is impressive. Additionally, the company has earned a reputation for a product that not only meets, but exceeds expectations. As a former small business owner myself, I know how much teamwork and dedication it takes to achieve and ultimately sustain success,” the proclamation said. 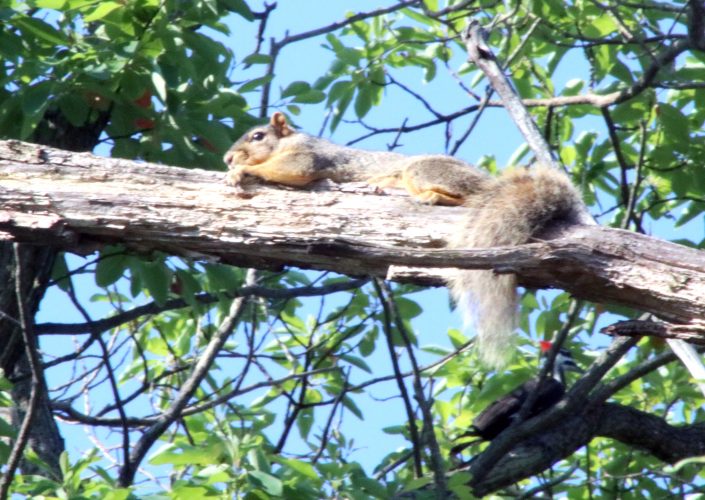