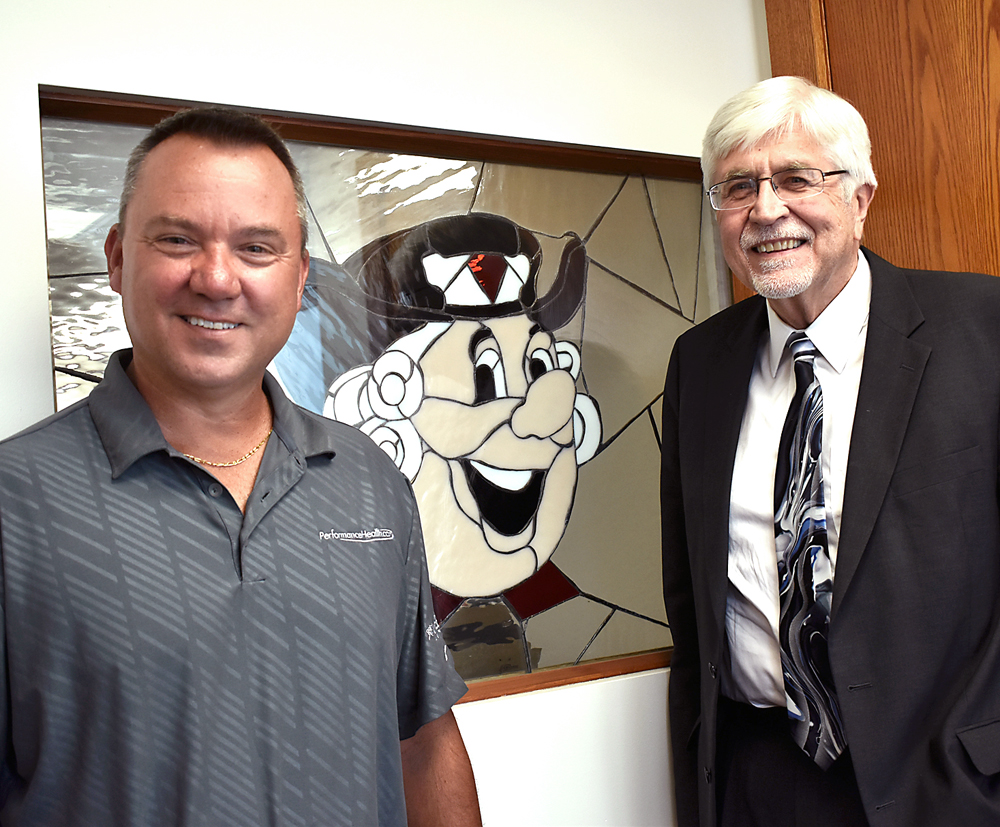 Those two credos represent the past and future of Salem City Schools as Dr. Joe Shivers prepares to hand the keys to the Quaker kingdom to fellow Salem High School grad Sean Kirkland when the sun sets on July 31.

The two longtime educators both grew up in Salem, represented their school as athletes and graduated bleeding red and black, but traveled different, although at times similar, paths to the superintendent’s chair at their alma mater.

The first activity Shivers said he’s doing as a retiree on Aug. 1 is sleeping in, after that, well, he has some ideas and said he wants to stay involved somehow. He said he’s going to miss the staff’s book club, which focuses on non-fiction works, some education-related, some general. He and his wife Madeline plan to do some traveling to visit their sons, Joseph in Denver and Brian in New York.

Kirkland said he’s already committed Shivers to traveling with him to some after school sporting events. As Shivers moved up the administrative chain, Kirkland followed, so they’ve been working together a long time. The day to day conversations are what he’ll miss with Shivers.

“Relationships have been a major focus for me and that’s something I plan on continuing,” he said, noting his relationship with Shivers and his mentorship. “Outside of my father and my son, I’ve never had a more significant male influence in my life.”

“Keep doing what you’re doing. Stay focused on your vision. Stay true to your motto,” he said.

Looking back at his own career, Shivers said he hired carefully, dressed professionally and tried to write and speak thoughtfully and sincerely. Teaching wasn’t his first choice. After high school, he played college basketball at Baldwin Wallace and majored in political science and considered law school. He did some traveling with fellow Class of ’66 grad Joe Rottenborn, who’s been a mentor to both him and Kirkland. He worked as a night watchman for Quaker Security, then heard about an opportunity to earn $11 a day as a substitute teacher at Salem. His first day, he was hooked by noon. By day, he subbed, by night, he watched, and in between he played basketball in two different leagues.

He was taking classes at Youngstown State to get his certification and ended up teaching eighth grade at St. Paul School before leaving for the Peace Corps and serving in Korea for two years, learning the language, calligraphy and Tae Kwon Do (he’s a black belt). He returned to the States and was a bartender in Cleveland, then was offered a job at a private Catholic boys high school in Hebron, took his master’s degree coursework at Ohio State and got a central office job in the Catholic Diocese in Columbus. Somewhere in there, he and Madeline married, and he saw a speaker from Harvard and filled out an application. They moved to Massachusetts so he could earn a doctorate at Harvard and he worked at the Divinity School at Harvard.

But Ohio was home, so he and Madeline returned, by way of Kirtland, then East Palestine, Columbiana where he worked with Rottenborn, then he finally landed in Salem. He started as curriculum director, then middle school principal, then high school principal and superintendent.

“I think I have a lot of reasons to be humble,” Shivers said.

A lot has changed since he came to Salem, going from two advanced placement course to 17 now, big renovations at Reilly Stadium, renovations to the various school buildings, including the library at the high school right now. But Shivers said he just wants to be remembered as a Salem boy.

“Thanks to my family; to all of my colleagues — classified, certified, and administrative; to all those who volunteered in our schools on the stage, on the fields, and on the courts; to the students and parents who defined my work for 18 years; to my friend and mentor Dr. Joe Rottenborn; to the many, many townspeople and organizations that support the Salem Schools so generously; and to the members of the Salem Board of Education with whom it was my privilege to serve,” he said.

Kirkland said he’s very fortunate to have Shivers as a mentor, every step of the way. He said Rottenborn ranks up there, too. He was an assistant principal and Kirkland’s football coach and that’s another one of the relationship’s he’s built along the way. Even as a youngster, Kirkland knew he enjoyed teaching.

“I kind of always knew this would be my path,” he said.

He graduated from Salem in 1986 and went to Edinboro State University to play football and major in physical education. He got hurt after one year and transferred to Kent State University where he changed his focus in education to industrial technology. His industrial technology teacher in high school, Tim Tamati, had an influence in the direction he took, noting that he built relationships with the students and made the coursework interesting. He also established good relationships with the parents.

After graduation, Kirkland’s first teaching job was at Leetonia where he also coached football under Artie Altomare. After the first year, he received job offers from Marlington, West Branch and Salem. He actually did his student teaching at West Branch and had a good experience there, but Salem called first. He became the industrial arts teacher, teaching woodshop, photography and tech prep.

“This wasn’t a major goal. When I look back, the experiences I’ve had and relationships with people are why I’m here,” he said.

He and his wife, Cindy, have one son, Owen, who just graduated from Salem High School this year. Kirkland said he’s looking forward to the changes ahead, to establishing relationships with the people he doesn’t know as well in the district, with the students, the parents, the community and the board and he’s excited for the chance to serve.

SEBRING — An hours-long standoff in the village ended peacefully on Friday. According to the Salem News’ news ...

COLUMBIANA—City council approved the request from the Fairfield Ruritan Club to hold its annual Classic, Custom ...