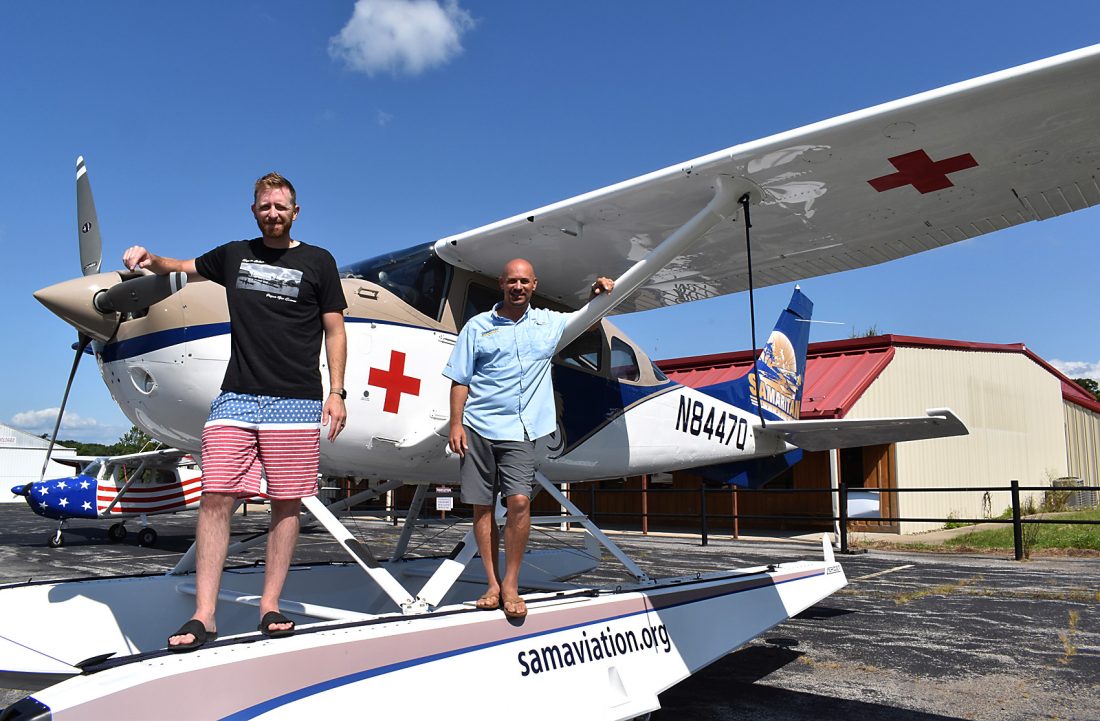 Salem resident Jesse Brunk, left, and Samaritan Aviation CEO & Co-Founder Mark Palm stand on one of the floats on the new plane that will join the fleet of the Christian-based non-profit, which provides free life-saving flights to residents of remote villages in Papua New Guinea, an island nation in the South Pacific. Palm landed at Salem Airpark on Thursday to meet with area supporters, including his friend Brunk, as part of the Hope in Action Tour. To learn more or join the cause, visit www.samaritanaviation.org. (Salem News photo by Mary Ann Greier)

SALEM — The newest float plane destined to help villagers in Papua New Guinea reach life-saving medical care landed in Salem Thursday, bringing a message of Hope in Action and service to others.

“We all need to be part of something that’s bigger than ourselves,” Samaritan Aviation CEO and Co-Founder Mark Palm said.

Palm was here to meet with local supporters of the Christian-based non-profit as part of the Hope in Action tour, a cross-country trek to help raise funds for the cause.

As the son of a preacher, he took that lesson of serving others to heart, recalling the story of the Good Samaritan. He also had a love of flight, the grandson of a World War II pilot and an aviation engineer and pilot himself.

On a mission trip to Mexico with his church youth group when he was a teen, he experienced a different culture and what they dealt with on a daily basis just trying to meet basic needs.

Palm said he felt God was speaking to him, telling him to use his passion for aviation to help others.

“That moment changed my life,” he said.

Then during a trip to Papua New Guinea, he and a friend saw a need there for access to medical help. They returned to the United States and started Samaritan Aviation with a dream of returning to help remote villagers with life flights to the one hospital serving a region populated with half a million people.

Salem resident Jesse Brunk, one of Palm’s supporters, had befriended him in Florida in their younger days. Brunk and his family own and operate Brunk’s Stoves and RV Sales. Brunk also serves as executive pastor at Damascus Friends Church.

Palm came for a visit to Salem Airpark with the non-profit’s first plane in 2008, securing the support of the Brunk family after relaying the type of work Samaritan Aviation planned to do.

“He told us his dream. We believe what he believes, that everybody deserves a chance. God taught us that people are valuable,” Brunk said.

In 2010, the dream came true — Palm, his wife and three kids moved to Papua New Guinea and started operating what he described as a lifeline to the villagers who live along a 700-mile remote river in the East Sepik Province.

Their normal mode of access to the hospital isn’t an easy trip. Villagers have to paddle a canoe up the river to a road where a vehicle can take them to the hospital, a trek that can take one-to-three days from home.

Samaritan Aviation can answer the 911 call for help, land in the water and fly the patient and a family member to the hospital within 45 minutes — all at no cost. To date, they have completed 1,460 flights. Palm said 40 percent are emergency flights with moms and babies, noting a lot of pregnancy issues. Other reasons could be snake bites, tuberculosis, crocodile bites and injuries from tribal fighting. There is a flight nurse on board and they have had to learn the language, Tok Pisin, to communicate with patients. Depending on the emergency, they may carry a midwife, a trauma nurse or even anti-venom for snake bites.

The staff includes five families in Papua New Guinea, all pilots and medical personnel, and four staff families in the United States. Not only does Samaritan Aviation get patients to the hospital, but also makes an effort to get them home, to feed them, clothe them and pray with them.

The non-profit also delivers medical supplies (167,000 pounds so far) and provides disaster relief services. Two planes provide the services now, with this third plane expected to arrive next year. The new plane was actually built in 1976, but there is a lot done to modernize it and make it able to do the job ahead. A door must be installed for gurney access, tip tanks on the wings, new interior, new avionics, new propeller, floats and a new engine and paint job.

This plane still needs the new propeller, avionics and engine. Once the funds are raised to complete the renovation, the plane will be disassembled, shipped to the island and reassembled. So far, $450,000 has been raised for the $600,000 project.

The non-profit receives 40 percent of its funding for operations from the Papua New Guinea government and then the rest comes from donations from people in the United States. Palm said they have received all kinds of fruits, animals and things from villagers for their efforts.

“They say thanks any way they can,” he said.

Palm was excited to be back in the Salem area for the Hope in Action Tour.

“We’re telling the story to raise awareness and looking for staffing, pilots and medical help,” he said.

To learn more, to donate or to become involved, visit www.samaritanaviation.org.