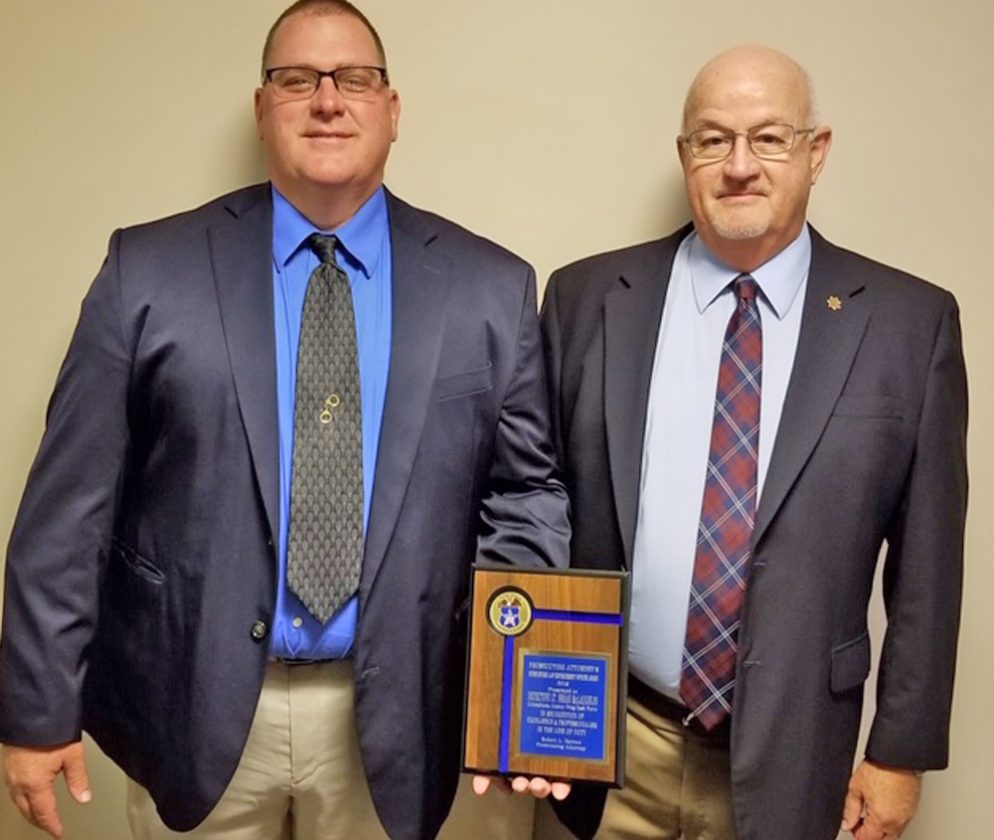 LISBON — Det. Lt. Brian McLaughlin of the County Sheriff’s Department, who has served as Director of the Columbiana County Drug Task Force for 14 years, has been recognized as the 2019 Columbiana County Outstanding Law Enforcement Officer by County Prosecutor Robert L. Herron.

The annual award is presented to officers who demonstrate superior ability and leadership in law enforcement and whose work ethic makes the Columbiana County community a safer place.

A 29-year veteran of the Columbiana County Sheriff’s Department, Det. McLaughlin is notably the only two-time recipient of the Outstanding Law Enforcement Officer Award.

“Det. McLaughlin is an experienced, honest, hands on, hardworking, leader in local law enforcement. The Drug Task Force, under McLaughlin’s leadership, has consistently broken records in the County in the number of criminal investigations resulting in prosecutions, and in the seizure of drugs and firearms. During McLaughlin’s tenure as Director, the Drug Task Force has been responsible for more felony prosecutions than entire police departments.”

A graduate of Columbiana High School and the Salem Police Academy, McLaughlin has served in many capacities with the Sheriff’s Office, including Commander of the SWAT team, and as supervisor of the Patrol Division.

McLaughlin is also an instructor for the Ohio Peace Officer Training Academy, a firearms instructor, a member of the Ohio Task Force Commanders Association, an elder of the First Church of Christ, a Master Mason with the Free and Accepted Masons Lodge #417, a member of the Fraternal Order of Police Lodge #178, and was a certified EMT.

Det. Lt. McLaughlin received training at the Drug Enforcement Administration training facility in Quantico, VA, and has written applications securing more than $1.8 million in grants for the Drug Task Force and Sheriff’s Office.

McLaughlin and his wife, Shelly, have four children.