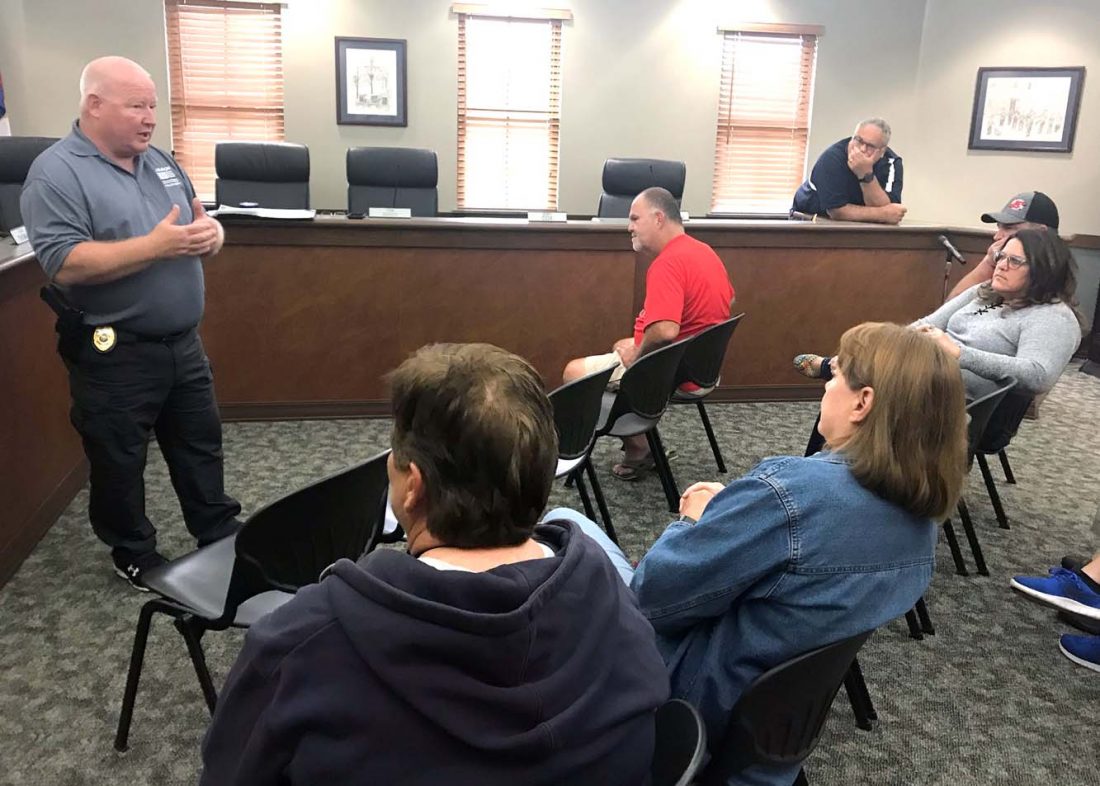 Lisbon Police Chief Mike Abraham speaks to some of the small crowd assembled Friday morning to hear him speak about the need for a proposed 0.5 percent increase in the village’s 1.5 percent income tax. There were 12 people there, but half were village officials and employees. Abraham intends to hold two more town hall meetings this month in advance of the Nov. 5 election. (Salem News photo by Tom Giambroni)

LISBON — Police Chief Mike Abraham says voters need to ask themselves this one question before voting for a proposed 0.5 percent increase in the village income tax in November:

What kind of police department do you want going forward?

About six people besides village officials and employees showed up at Friday morning’s public forum to hear Abraham explain why voters in the Nov. 5 election should support raising the village income tax to 2 percent and what he wants to do with the extra money it would generate. Approximately 75 percent is earmarked for the police department.

Abraham believes ideal staffing for Lisbon is 10 full-time officers (which includes the chief), along with several part-time officers to fill in as needed. This allows him to run 10-hour shifts of two officers per shift, and three for several hours during overlap shifts. This also gives Abraham enough manpower to continue having an officer serve as a school resource officer and assign another to the county drug task force, both of which he considers priorities.

Over the past several years the police department has been losing a steady stream of new officers to other departments that pay better, which is the problem. Abraham said in the last two years alone he has lost eight full-time officers to other departments, and he announced during the meeting a new officer hired just over a month ago has resigned for a better-paying job with the Carroll Count Sheriff’s Office.

Lisbon officers make an average of $16.61 an hour after five years, which is referred to as base pay. After that, they only receive increases when approved by council. The base-rate average is $22.90 an hour for eight local law enforcement agencies surveyed by Abraham: the county sheriff’s office and the Columbiana, East Liverpool, East Palestine, Salem, Liverpool Township, St. Clair Township and Perry Township police departments.

These departments serve larger populations, but Abraham said he chose them because they have at least 10 full-time officers or more, which would put them on par with Lisbon. He is also losing officers to many of these departments.

The turnover is a problem because the three most senior police officers – Abraham, Fred Carlisle and Lt. Shar Daub — all have more than 20 years in and could retire within the next several years. The next senior officer after Daub has been with the department less than five years.

“This is a village police department … trying to keep its officers and bring stability to the department,” he said.

The 0.5 percent increase is expected to generate an additional $383,000 per year based on current collections, with $287,000 earmarked for the police department. If the tax increase is approved, Abraham envisions asking village council to raise pay in two phases but he does not know by how much just yet. The first request will be in 2020. After that, officials should have a better idea of how much additional revenue is being generated by the tax increase, but he said the goal is to get to $22.90 an hour or more.

While pay is believed to be the major issue, Abraham said the other problem is health insurance. Several years ago, council quit offering coverage to employee spouses and other dependents, and he said better insurance coverage is another reason why his officers are leaving.

Councilman Peter Wilson also attended the meeting and he asked if anyone had crunched the numbers on what all of this might cost? Abraham said he would come up with figures for council after deciding on how much of a pay raise to seek in 2020 should the tax increase pass.

Wonner has estimated it would cost $125,000 annually to raise the base rate by $6 an hour for 10 full-time police officers but that is predicated on the entire staff being at the base rate. She has yet to look into how much it would cost to restore insurance coverage for dependents for all employees because the rates for 2020 have yet to arrive. The difference is about $500 a month based on 2019 rates and there about 20 full-time village employees.

Abraham emphasized these are all decisions that will have to be made by council once it gets a clearer idea how much extra the tax will bring in.

Abraham said they originally looked at seeking a police levy but changed their mind after learning the size of the levy would be have to be considerably higher than what they were prepared to put before voters, many of whom are on fixed incomes. For example, a 3-mill levy would only generate $100,000 a year.

The income tax is only on earned income and would not affect retirees or others on fixed incomes. “We thought that made more sense … which I think is a lot more fair,” he said of going with the income tax increase.

The police department has also been having a difficult time keeping its dispatchers, and Abraham said he intends to ask council to also consider raising their pay. The top rate for dispatchers is $12 an hour.

Council at one time looked into contracting with the sheriff’s office for dispatching services but the sheriff’s office likely needed to add a dispatcher position to keep up with the volume of additional police and fire calls it would have inherited from Lisbon, which reduced any potential savings. Village officials ultimately decided having a dispatcher on duty around the clock was an essential service they needed to continue to provide residents.

“So we have looked at every avenue we could to save money,” Abraham said.

The income tax, which was last increased more than 25 years ago, has not fluctuated much over the past 10 years. The tax generated $1.13 million last year, and it is the largest source of revenue for the village general fund,

Mayor Roger Gallo described himself as a fiscal conservative, “but we are reaching the breaking point when it comes to the police department … The way it’s going it’s going to continue being a revolving door.”

Drug-related crime is a problem, as it is everywhere in the county. “It’s not the same town,” said Gallo, a lifelong resident.

This was the first of three such town hall meetings Abraham plans to host before the Nov. 5 election. He expects to host another meeting in mid-October and at the end of the month.