LISBON — Judge Tim McNicol has been on the bench at Columbiana County Municipal Court since he was appointed in March 2018, but he will have to defeat challenger Heaven Guest on Nov. 5 if he wants to stay there.

McNicol said he has found Municipal Court as a nice change from his previous position as an assistant county prosecutor, where he spent much of his time handling the child abuse and sexual assault charges. That job gave him a chance to change lives.

“This job gives me that opportunity as well, but in an equally important but different way,” McNicol said.

Guest said she has noticed there has been only one choice on the ballot when she has voted in judicial cases the past in Columbiana County. She believes in a democracy there needs to be a choice.

“I have the education, the background, the experience, the commitment, the drive and would love to be able to continue community service in this manner,” Guest said. “I like to help people. I think I have the different tools I have learned in Summit County that we don’t have here that I can bring to people in Columbiana County.”

Although Summit County may have more resources to develop programs, Guest said she believes many of those programs will work here too.

McNicol presides over the the first drug court established in Columbiana County, a program that instead of sending them to jail gives drug users a chance to work through a case plan to get out of the cycle of addiction and regain their lives.

“We are achieving success, while not in every case,” McNicol said, “I firmly believe the drug court is helping people overcome their addictions, reuniting them with their families and helping them enter back into society.”

McNicol said one of his campaign slogans is that he is a judge who is firm but fair.

“When someone enters the drug court docket, I tell them there are three ways they are going to leave that docket,” McNicol said. “Either they are going to be successful and sober or they will be incarcerated or they will be dead. That may seem harsh, but that is the reality I want them to realize when they accept what the drug court has to offer.”

McNicol credits the staff and the other agencies involved with the drug court, including the Family Recovery and the county Counseling Center, for making the drug court work. The two agencies attend drug court and make recommendations for those involved.

Additionally, when it comes to helping make the drug court work, McNicol credits the probation department in Municipal Court, which he says is effective despite limited resources. The officers handle keeping track of the drug-court participants and a heavy case load of people on probation, as well. Last year, the probation department collected more than $262,000 in probation fees. Additionally, they monitored 30,000 community service hours in 2018, which provides help to various governmental and non-profit charitable organization.

Guest said there are variety of specialty courts in Summit County and she helps out with the mental health court, which she believes would be a great asset for the Municipal Court here..

“Sometimes folks are just fighting that mental health issue,” Guest said, “and if you don’t address it, they are never going to be able to comply with probation. It’s just a losing battle … There’s a spot for punishment obviously, as judges you have to enforce the law and follow the law, but there’s also a point where you have to recognize that there are treatment options that would be better for everyone, not just the offender.”

Summit County also has a felony domestic violence court and Guest said she just helped write a grant $750,000 to pay for three positions to help with domestic violence, which she feels is important to help everyone in the family.

Guest said she has also helped out with two drug courts in Summit County.

“That’s really rewarding too, to see folks who have addiction get help,” Guest said, “and let’s face it affects every social economic class and we all have to recognize it as an issue, we have to do something to help people get treatment, hold offenders accountable, but if we don’t address the issue it isn’t going to get any better, unfortunately.”

Guest said someone recently told her that in Summit County 89 percent of the meth is laced with fentanyl, which can lead to overdoses. She points out there are test strips that can be given out that can tell people if something is laced with fentanyl. She is Narcan trained herself, because she was concerned about those coming into court or the prosecutor’s offices overdosing on drugs.

McNicol said he feels he has an extensive background in both criminal and municipal law, which qualifies him for the position. He was an assistant prosecuting attorney for 26 years. Served as legal counsel for East Liverpool, Lisbon, Salineville and Rogers. He also served as mayor’s court magistrate for Wellsville, Salineville and Summitville. When he was appointed to the bench he had been the mayor’s court magistrate in Wellsville for 16 years, the only one they ever had.

Guest also has a variety of experience. She served as a judicial attorney/law clerk for Judge Nader in the 11th District Court of Appeals, drafting opinions and researching cases in every area — criminal, civil, domestic, administrative issues.

“Everything from misdemeanors to murder,” she notes. “I loved that job.”

She next joined the Summit County Prosecutor’s Office in 2003, starting in child support. Then she went to juvenile court helping children not being cared for and those children violating the law. During that time she was involved in a federal grant program for two years called Great Gangs Resistance Education and Training, where she and a deputy would speak at schools where there had been gang activity. The program worked to convince to students about the importance of being part of the community.

Should McNicol maintain his seat on the bench there are some changes he is looking forward to implementing in Municipal Court. On Jan. 1, 2020, the court will begin the process of allowing for the e-filing of citations, which should speed up the process for the clerks and be more convenient for law enforcement. In March, each courtroom will be assigned a clerk, allowing the cases to be immediately inputted into the system with the court date set and available to the public online. This will reduce the amount of time defendants will have to wait following the hearing.

“If elected, I look forward to continuing to serve the people of Columbiana County and fairly and effectively administer justice to the best of my ability,” McNicol said.

While McNicol hopes to maintain his seat on the bench, Judge Mark Frost will not be returning to the other courtroom at Municipal Court. McNicol noted it has been a pleasure serving with Frost and he will be missed.

Although she lives on the edge of Columbiana County and has spent most of her career serving the people in Summit County, Guest points out you run where you live and she believes her experience would work well here, bringing some new ideas and programs. For instance, she loves doing outreach activities and recently spoke to about 900 people about human trafficking problems in Ohio.

“It would be nice to serve the community I live in,” Guest said. “I think because I am a transplant I just consider myself part of a bigger community than just where I was born and where I live.” 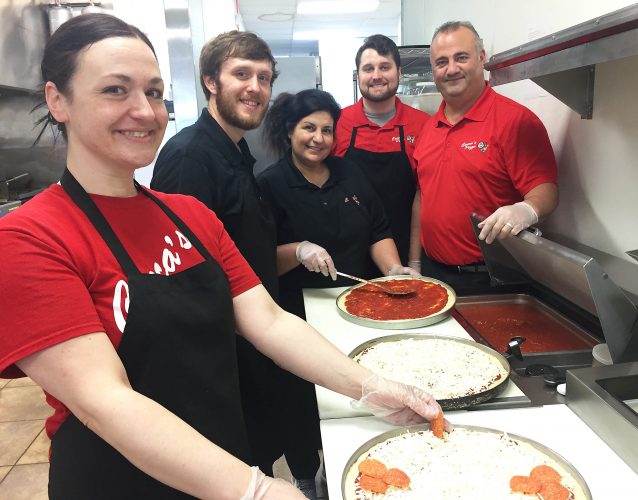