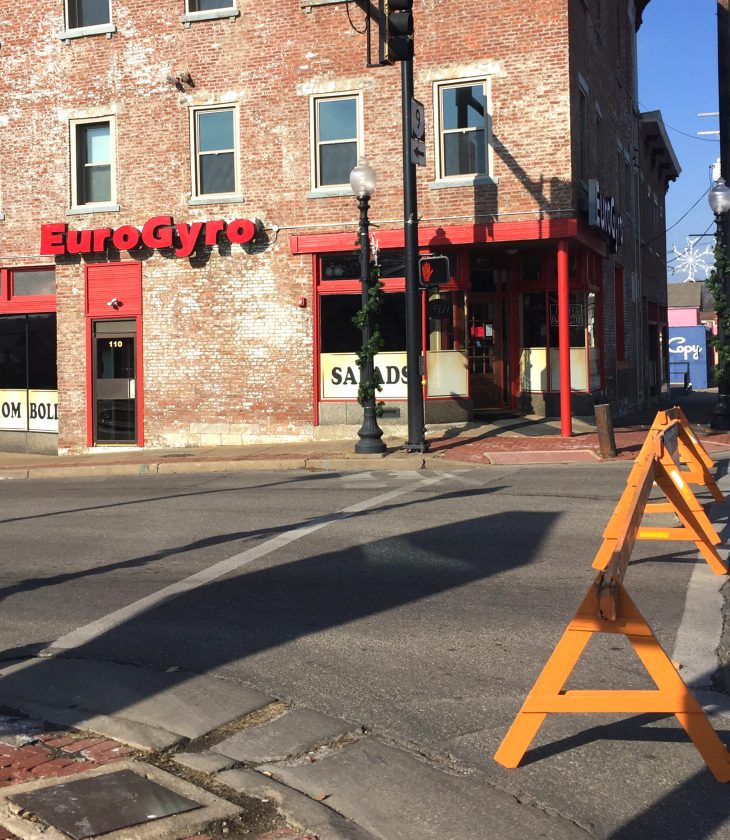 SALEM — A section of West State Street between Ellsworth and Howard avenues will remain closed until the south and west walls of the EuroGyro building can be temporarily stabilized and a structural engineer says it’s okay to reopen, city officials said Friday.

Same goes for the popular restaurant on the first floor and the apartments on the second floor — closed until the building can be stabilized and more permanent repairs made to ensure the safety of anyone inside.

EuroGyro unexpectedly closed its doors Thursday before lunch by order of Salem Fire Chief Scott Mason after firefighters responding to an alarm activation checked the building and found issues on the third floor where the south wall appeared to be separating from an interior wall.

Mason contacted a structural engineer to inspect the building Friday morning and the results forced the city to shut down all lanes of travel on that block on State Street and block off the sidewalk on the north and the EuroGyro parking lots to the west and north.

“It’s unknown at this point how long that section of State Street will be closed,” Mayor John Berlin said, adding it’s reminiscent of the year they had to close State Street due to issues with the former TanFastic building that ended up demolished, along with two buildings next to it.

With a Division 4 high school football playoff game between Poland and Indian Creek set for tonight at Sebo Stadium, Kenst contacted school officials about the road closure on State Street. Pershing Street will be closed for the game between Lincoln and Ohio so buses can park there.

“We’re hoping whatever repairs need to be done can be done quickly and EuroGyro is back open,” Berlin said, adding that the “main concern is safety.”

Mason explained what was found by engineer Michael Mazzocco of Barber & Hoffman, Inc. during his inspection Friday morning. Apparently there’s a dropped ceiling on the third floor, then the original finished ceiling, then above the original ceiling they found a third ceiling and “that upper ceiling had a failure the entire span on State Street.”

The engineer used a ladder, through an opening to the attic, to see what was there and saw that the ceiling joists had fallen the entire span of the building along the south wall, which is the State Street side, meaning the wall isn’t supported. He estimated a 3.5-inch separation between the south wall and the original finished ceiling.

The written report by Mazzocco, provided to the Salem News by Mason, said “Observations revealed a partial ceiling collapse, disengaging the wood ceiling joists from the south masonry wall. Lastly, the west exterior wall was also observed and appears to also have outward bow, similar to the south wall.”

He had noted that the south wall at the third floor appeared to be displaced outward 3 to 3.5 inches and the exterior southern ornate corbels appeared to be pulling away from the roof and building.

“The hip roof structure has four sloping surfaces (rafters) which are vertically supported by the exterior walls. The third floor ceiling joists provide the horizontal bracing for the top of the masonry wall and also prevent the rafters from pushing outward. Since the south wall ceiling joists have collapsed, the wall is not adequately braced. Therefore, the rafters and wall are not structurally stable,” the report said.

Mason said the south wall is just moving on its own. Firefighters had done a walk through of the building, including the third floor, at the end of June after an alarm activation and found no evidence of anything moving then and no cracks. There had been no visual evidence of any collapse, he said.

Mason said he was told the east wall facing Ellsworth seems to be structurally sound and there were no issues found with the north wall. One apartment tenant was seeking assistance from Salvation Army and the other tenant had a place to go. The building owner, George Istocki, who owns EuroGyro, was present for the inspection.

“He’s just trying to weigh his options right now and figure out the best way to go,” Mason said.

Istocki said Thursday that the roof had been leaking and he had work done on the roof and his own engineer had been scheduled to come next week to inspect the building. After what happened Thursday, he said at the time that his own engineer was supposed to look at the building today. The restaurant opened in the spring and had been enjoying success, with a ribbon cutting held recently.

“I feel bad for the owner. I do think he was surprised by the extent of the damage up there,” Mason said.

For the street closing, he said that was the engineer’s recommendation.

“It was an immediate hazard. We had to shut down the street to make sure everybody’s safe,” he said.