Salem teen turns love of reading into book of her own 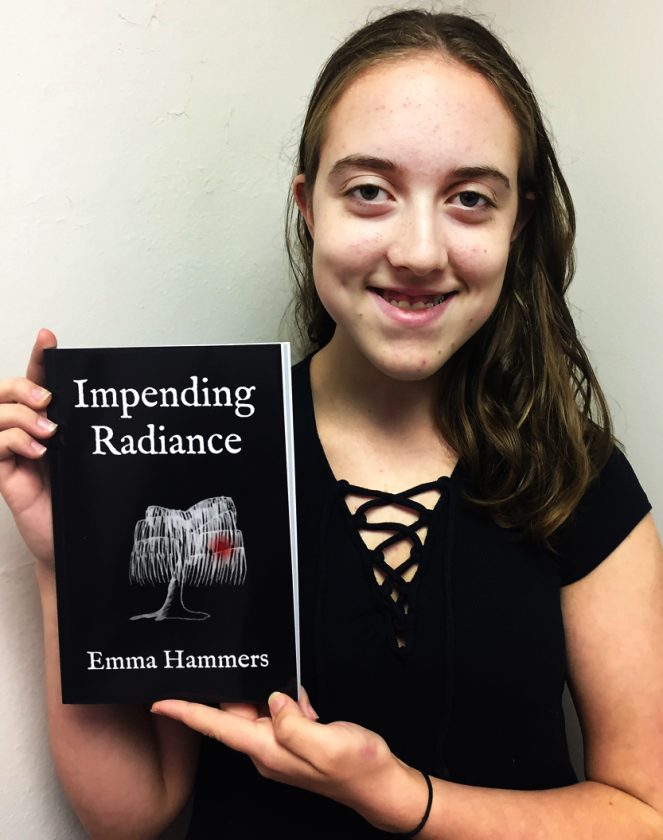 SALEM — While other babies played with toys, Emma Hammers flipped through the pages of a book — now the voracious reader has written one.

And it’s not just written, it’s self-published and available on Amazon.

The book is titled “Impending Radiance” and includes artwork on the front and back covers by Hammers, a Salem eighth grader who likes the science fiction and fantasy genres. She started working on the novel in sixth grade, after getting the idea for the prologue and typing it out on a manual typewriter. She said the story just came to her and she built on it.

“I just kind of kept going with it. I realized I had the whole story planned,” she said.

The story is about a girl named Lucy who slowly meets characters from a different dimension. She ends up helping them save their world, according to Hammers, without giving away all the interesting details that draw readers into the world she created on paper.

She explained that the word “radiance” from the title is another name for a group of cardinals and cardinals play a big part in the book. Willow trees also have some significance throughout the book so she featured a cardinal in a willow tree on the cover.

The description on the back of the book says, “They come from a world different than ours. Another dimension, you could say. It is a world where fairies glide across the sky, goblins swim underwater, and shapeshifters walk the land. But now they’re here. Their world has lived in a state of peace for thousands of years. This state of peace has been interrupted. They need help to restore it. I had no choice. I was already wrapped up in it before I even knew what was happening. This world originally seemed foreign, but I am slowly realizing that it is closer to home than I thought.”

She had planned out the beginning of the book and she said she knew what the ending was going to be, but she didn’t know what the middle was going to be. She worked on the story slowly in sixth grade, using her computer, then took a long break, and went back at it in seventh and eighth grade, finishing the draft on July 1. She let a couple people read one or two chapters but no one had read the whole book. Her mom, Dawn, read the finished copy and she also asked her former teacher from Southeast School, Kevin Utt, who’s now retired, to do some editing. Her third-grade teacher from Reilly Elementary, Kelly Janofa, also read it.

“They liked it a lot. They were impressed with how much my writing had changed since they had me in class,” Hammers said.

Her mom told her she should try to get it published.

“The first time I read it, I cried the whole way through thinking this was my baby who wrote this,” Dawn said.

She was surprised. She’s not a reader, but she read the book in three days, saying the story drew her in and was almost like a movie.

“The way she wrote it, I couldn’t get enough,” she said.

Her daughter has always been a reader. Her dad, Neil, said there’s even a picture of her as a baby holding a book. He said both sets of grandparents were very intelligent and he joked that it must have skipped a generation. He was surprised when Dawn and Emma came to him about publishing the book.

“I never thought I would have a kid so amazing and so smart,” he said.

Emma’s little brother, Max, who’s 10, earned an Amazon gift card through scouts so he could be the first buyer of the book. He read the book and said it was great. Dawn said he’s very proud of his sister.

The dedication page says “For Wawa” — that’s what Hammers called her late grandmother, Carol Keller. She dedicated the book to her.

“She was one of my favorite people before she passed. I know if she was here, she would have been very encouraging,” Hammers said.

The book was published through Kindle Direct Publishing. The company checked her submission for formatting, sent her a proof to check and it didn’t take long to hit the market on Oct. 31. She said the company doesn’t charge a fee, but keeps part of the royalties from sales. The book is available for Kindle and as a paperbook.

The family bought author copies at cost and can sell them on the outside. Hammers plans to sell some at the upcoming craft show at the Salem Memorial Building on Dec. 7.

She’s already planning a sequel, which some of her readers were hoping for according to a couple of reviews of the book online by people she knows. She said she’s inspired by famous authors and how they write and according to the section in the book about the author, she said she wants to be a famous author someday and work in the science field.

She’s also a dancer, as a member of the Infinity Dance group for 10 years, competing in tap. She’s an editor on the junior high newspaper, a member of Spanish Club, was runner-up in the school spelling bee in fifth grade and plays flute in the band.

Her advice for others dreaming about writing a book is this: “Your age doesn’t stop you. You can do it even if you’re young.”