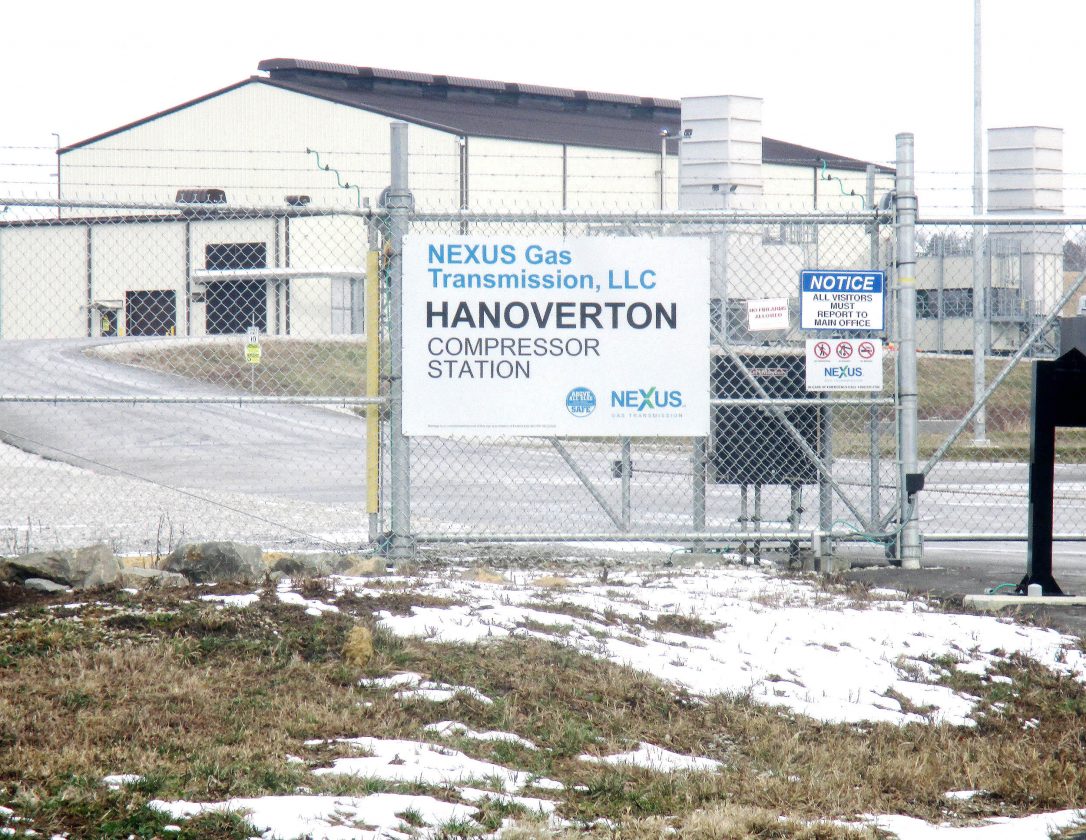 One of the compressor stations in Hanover Township, part of the NEXUS natural gas transmission pipeline. (Salem News photo by Ron Firth)

LISBON  -The United Local school board is able to proceed with plans to build a new school complex even if NEXUS is successful in getting its property taxes lowered.

Owners of the NEXUS natural gas transmission pipeline filed appeals with the Ohio Department of Taxation to have the taxable value of its pipeline and compression stations across the state lowered by 30 percent to 50 percent. The 256-mile transmission line begins at the gas collection and processing plant in Hanover Township and heads north into Michigan before terminating in Canada.

The line passes through Franklin, Hanover, Knox and West townships and includes the United Local and several other school districts. Based on the assessed value of the gas line as set by the state, NEXUS would pay a combined $10.6 million property taxes annually, with $5.1 million going to United Local.

The school board announced in November plans to build a new school complex using $25 million in state funding and the $5.1 million it was to receive annually from NEXUS. The company then filed its appeal, which if successful, would reduce the amount to $3.1 million.

Wayne Wallace from the county auditor’s office said Auditor Nancy Milliken alerted the United Local’s treasurer, and school officials ran the revised numbers past the financial firm retained for the project by the district. The firm determined even at $3.1 million that was still enough for the project to go forward.

The auditor’s office still intends to bill NEXUS based on its estimated value and not what is being sought by the company, but Wallace said in situations like this the company or person contesting the values usually pays the lower amount pending the outcome of its appeal.

“We will send (NEXUS) a bill for $5.1 million but they could elect to pay the $3.1 million, which is acceptable, until the dispute is resolved,” Wallace said, adding the same goes for every political subdivision due property taxes from NEXUS.

The next biggest beneficiary of NEXUS property taxes would be the Hanover Township trustees, who would have received $1.2 million per year. If NEXUS wins its appeal, the amount would be reduced to $743,000.

Following is a list of those subdivisions, with the amount they would have received and the amount in parentheses they receive should NEXUS win its appeal:

LISBON — The six communities in Columbiana County that switched to RITA are glad they did so. Officials from ...

SALEM — Parents, the public and anyone interested in learning about the dangers of vaping, Internet safety, human ...

BELOIT – The West Branch school board will get help from the Mahoning County Educational Service Center until ...

BELOIT — The West Branch school board will soon be deciding on a district restructuring plan that will close Knox ...