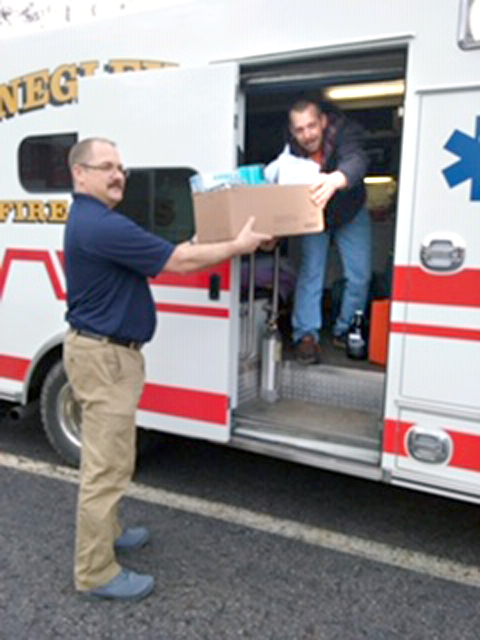 LISBON — Two more people have been confirmed to have the coronavirus COVID-19 in Columbiana County, bringing the total to 15.

According to statistics, there are currently nine county residents hospitalized with the virus. There are 10 men and five women who have tested positive, which includes the two deaths already reported. Twelve of the 15 cases are listed as people age 50 years or older.

There have now been 55 deaths reported by the Ohio Department of Health and the state passed the 2,000-case mark listing, 2,199 confirmed cases. Additionally, 585 are hospitalized with 198 of those listed as listed in the ICU.

While local hospitals are still able to handle the number of cases in Columbiana County, EMA Director Peggy Clark and county Health Department public information officer Laura Fauss talked about the numerous donations and National Strategic Stockpile items received in the county this week. Although the federal second shipment was less than the first, people and businesses in the county have been supplementing the materials received.

“We just want to show our appreciation to everyone,” Clark said, “and assure them that we are doing everything we can to get them right back out and into the hands of the people who need them.”

Fauss said the EMA has received donations from county residents and businesses of hundreds of gloves and masks, adding she believes the schools have brought in all the protective equipment they have on hand from both their nursing offices and their science labs. These items are being distributed to local EMS and firefighters. Additionally, Fauss said information is being given to these departments about addresses with known possible cases of coronavirus, so those arriving to help have a better idea of what protective gear they may need when arriving.

“First responders are really going to be an integral part of the surge we are expecting and preparing for in April,” Fauss said.

A third shipment from the National Strategic Stockpile is expected, but Clark said the EMA is continuing to accept donations of N-95 masks, surgical mask that can be worn over the N-95 masks to prolong their life and Nitrile gloves.

With two coronavirus cases confirmed with inmates at the FCI-Elkton, there have been concerns voiced by Joseph Mayle, president of the Law Enforcement Officers Union, who spoke to the Salem News’ news partner WKBN on Monday.

Mayle said there were concerns by the union representing the workers in the prison, that there were only three tests for the 2,469 inmates housed at the facility and 65 inmates were had coronavirus-like symptoms, but untested. Additionally, he highlighted concerns about inmates coming into the facility without being tested and officers needing to be able to self-quarantine if they need to without using up all their paid sick time.

The Bureau of Prisons’ office did not update their numbers on Tuesday, so it is not known if there are more cases in the prison.

When asked about equipment concerns at the prison, Fauss said the federal prison is supplied with equipment through the U.S. government, not the local health department. However, Clark said the county EMA is providing additional personal protective equipment to KLG, the ambulance service with the local contract to transport prisoners from the federal prison for medical care.