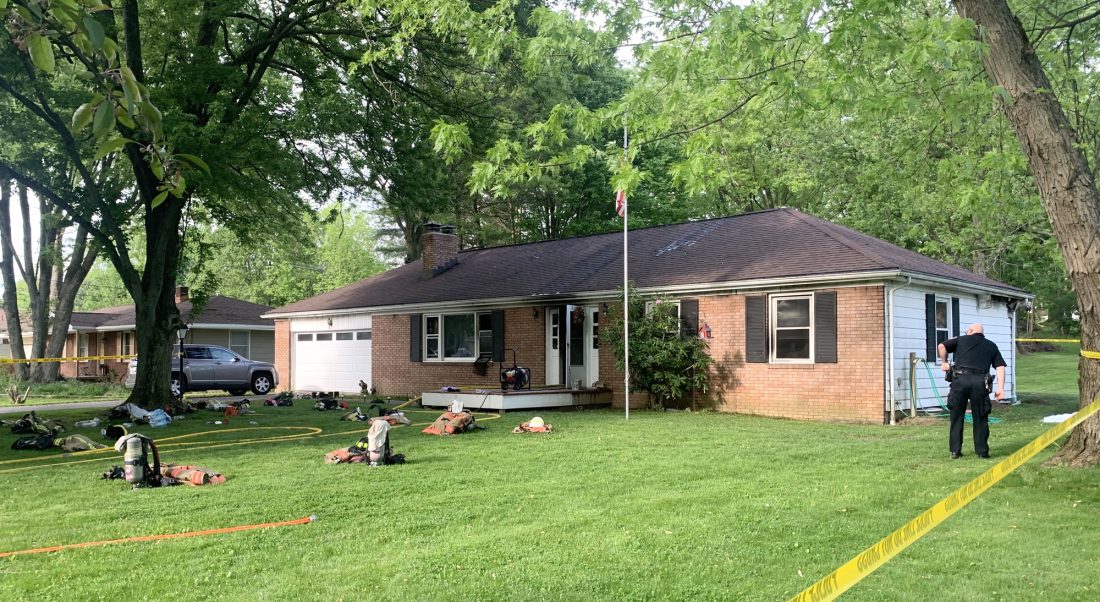 Fire equipment and a police officer can be seen in the front yard at 1268 Westview Drive where a 64-year-old man and some pets perished late Sunday afternoon during a fire. Salem Fire Chief Scott Mason said the cause of the fire is undetermined at this time, with both the State Fire Marshal and Salem Police investigating. (Photo provided by Salem Fire Chief Scott Mason)

SALEM — A fire at a single-story home on Westview Drive where a 64-year-old man, three dogs and a cat died Sunday remains under investigation with the cause undetermined.

Fire Chief Scott Mason said the name of the deceased wasn’t being released at this time. An autopsy was pending through the Columbiana County Coroner’s Office and the State Fire Marshal’s Office and Salem Police were investigating.

According to Mason, the fire appeared to start in a bedroom where there were oxygen tanks. The fire was contained to that bedroom at the back southeast corner of the home and hallway and traveled into the attic.

“There was a lot of heavy heat and smoke damage throughout the house,” he said.

The call came at 5:15 p.m. from a neighbor and dispatch called in the whole fire department. Upon arrival at 5:20 p.m., firefighters found the fire heavily involved.

The property at 1268 Westview Drive was a rental, with Stratton Brothers Real Estate listed as the owner. The victim lived there with his daughter, who wasn’t home at the time of the fire.

Two investigators from the State Fire Marshal’s Office and Detective Brad Davis of the Salem Police Department were called to the scene to investigate. Firefighters remained for several hours. Mason said no firefighters were injured, but some equipment got singed.