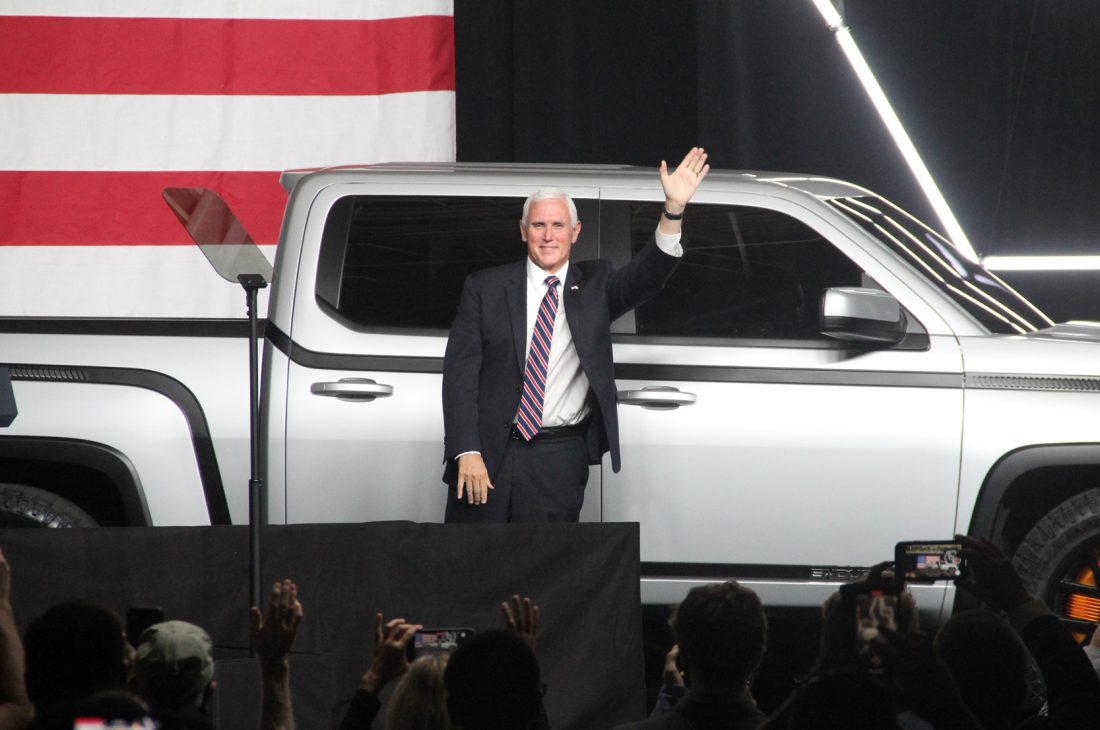 Vice President Mike Pence arrives in an Endurance for the vehicle’s unveiling at Lordstown Motors. (Special to the Salem News by Allie Vugrincic)

LORDSTOWN — Vice President Mike Pence quipped that Thursday was the first time he was driven onto a stage for an event.

“And what a beautiful vehicle to do it in,” said Pence of Lordstown Motors Corp.’s first running prototype of its all-electric Endurance pickup truck.

It was with those remarks that Pence opened his just more than 22-minute speech at the debut event for the truck at Lordstown Motors’ manufacturing plant, the former General Motors assembly plant, which he toured beforehand.

Pence was driven onto the stage, not by Lordstown Motors’ CEO Steve Burns, but by a U.S. Secret Service agent, according to Burns, who rode along with the vice president on the truck’s short drive around the part of the plant cordoned off for the launch.

Although portions of Pence’s speech sounded like a campaign speech for President Donald Trump, highlighting some of his accomplishments since taking office in 2017, Pence said Lordstown Motors is leading the comeback in Lordstown “on the basis of character and resilience, a reputation of professionalism” and on the “basis of faith.”

“I mean, you all know and people of the heartland know that for all that we’ve been through, the best days for this community, this state and this nation lie ahead,” Pence said.

In addition to the investment by Lordstown Motors, GM in a joint venture with South Korea’s LG Chem is building a $2.3 billion electric vehicle battery-cell plant adjacent to the assembly plant; TJX Companies Inc. is building a multimillion warehouse for its off-price home decor retailer HomeGoods in Lordstown; and Old Dominion Freight Line is relocating its trucking depot from Girard to the village — a project of about $6 million.

Pence’s talk included comments on jobs and wages, the White House’s reaction to the viral outbreak and the United States-Mexico-Canada Agreement (USMCA) trade deal that, he said, requires 75 percent of all automotive parts to be made in North America. Also, 40 percent of auto parts must be made by workers making an average hourly wage, he said.

“That’s how we have taken the incentive that was in NAFTA (North American Free Trade Agreement) to move jobs south of the border, that’s all gone,” Pence said. “We’re going to keep automotive jobs growing right here in Ohio and right here across the United States.”

He highlighted Trump’s action on COVID-19, from suspending all travel from China to a challenge Trump made to virus testing labs to ramp up testing to manufacturers stepping up to meet the need for medical equipment for health care and others on the frontlines battling the virus.

Outside of the plant, Pence’s visit was met with a small group of protesters. Among them was Werner Lange of Newton Falls, who was a fierce advocate of GM assigning a new vehicle to the plant after it announced plans for its closing.

His comments Thursday, however, were directed to Pence, who he called “Pandemic Pence,” and his “barbaric boss,” Trump, who “utterly failed the American people.”

“The pandemic is worse than ever and it’s their fault,” said Lange, who called the COVID-19 task force that Pence heads a “task farce.”

Julie Stout of Niles joined two Democrats who made the trip from Columbus in holding a sign that read, Trump to laid-off GM workers: “it doesn’t really matter.”

“I’m out here because it makes me sick to my stomach that Mike Pence calls himself a Christian,” Stout said.

“While Mike Pence tries his best to distract Ohioans from the administration’s botched response to the public health crisis, working families across the state are suffering. Over 2,700 Ohioans have died from the coronavirus, the unemployment rate in Ohio is the highest it’s been in more than four decades, and 863,000 Ohioans are at risk of losing their health care due to the Trump Administration’s reckless lawsuit to invalidate the ACA (Affordable Care Act),” said Kate Bedingfield, deputy campaign manager and communications director for Biden for President.

Preceding Pence was U.S. Energy Secretary Dan Brouillette and Erin Spring, director of new ventures for Akron-based Goodyear Tire and Rubber Company, which announced Thursday in a news release a collaborative agreement on tires and service with Lordstown Motors.

It also includes intentions from Goodyear to acquire Endurances to integrate into its vehicle fleet. It does not state how many of the trucks Goodyear intends to purchase.

“We want to be the tire maker of choice for electric vehicle manufacturers and working with Lordstown represents an ideal relationship with shared Ohio roots and shared values of innovation, performance and sustainability,” Spring said in the release.