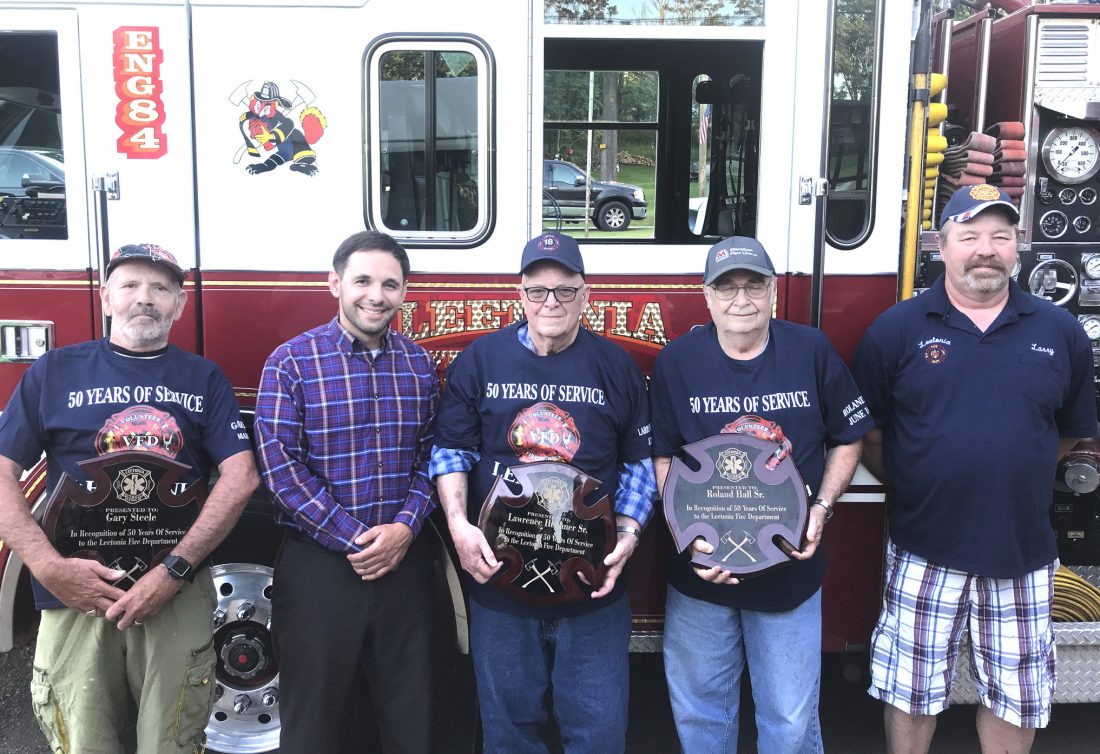 From left, Gary Steele, Ronnie Hall Sr. and Larry Hephner Sr. were honored this week in recognition of 50 years service with the Leetonia Fire Department. They are shown with Mayor Kevin Siembida, second from left, and Fire Chief Larry Hephner Jr. Siembida and councilman Bill Merdich praised the firemen for their service to the department and Leetonia community, putting their lives in danger to help others. (Submitted photo)

LEETONIA–Village Council will consider a costly project at the wastewater treatment plant to be completed as soon as possible.

Superintendent of Utilities Ed Allen told council replacement of the south clarifier at the wastewater treatment plant will cost $35,176 in parts and labor. He said the total cost is currently projected at $161,308, but will likely be closer to $200,000.

Allen said it will take eight to 10 weeks to manufacture the parts, with the actual work being scheduled three months out. It will then take six to eight weeks to complete, he said.

Allen said the clarifier, which he said is way beyond the life expectancy of 20 to 25 years, is currently being operated on a “work to fail” system, meaning it could crash at any time. He said the project needs to avoid the winter months because the clarifier is exposed to the elements. Chief water operator Lisa Smith noted she is in contact with a contractor who is already scheduling into September.

Allen noted the project has to go to bid and will include engineer costs. He said he is looking for more quotes.

Mayor Kevin Siembida said there is $110,000 in the sewer capital fund and $55,000 in the sewer operations fund. He said he is looking at funding for the project, but said it could be determined by the village’s sewer rates and whether the rates are considered too low. A previous assessment suggested the rates are too low.

Siembida said he is reviewing the rate ordinance to determine how much is going into the sewer fund.

Council will hold a committee meeting after the June 17 council meeting to determine a plan to fund the project as soon as possible.

The next regular council meeting is scheduled for 6:30 p.m. June 17 via GoToMeeting, followed by the water and sewer committee meeting.

Trump, Biden try to outdo each other on tough talk on China