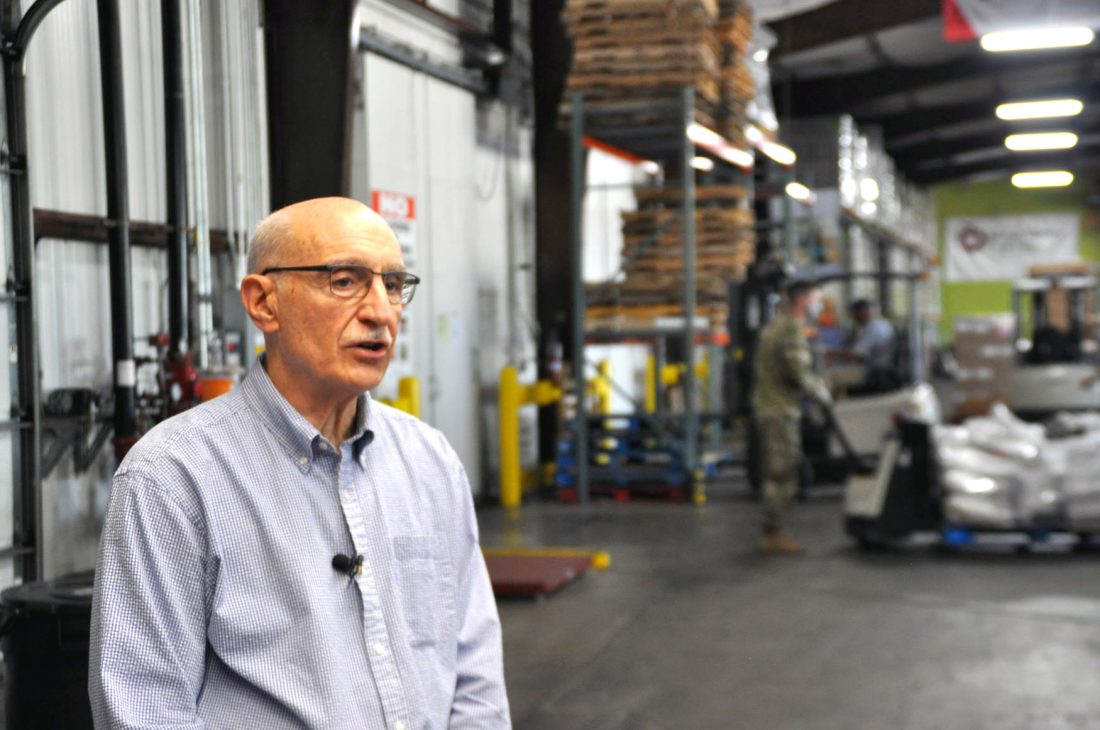 Mike Iberis, executive director for Second Harvest Food Bank of the Mahoning Valley, confirmed that nearly 21,000 meals will be provided because of the donation of 2,500 pounds of local meat Thursday. (Photo special to the Salem News by Ashley Fox)

YOUNGSTOWN — Area families will be receiving protein as soon as next week when they pick up their food from Second Harvest Food Bank of the Mahoning Valley.

On Thursday morning, volunteers for the food bank and the Ohio National Guard unloaded 2,500 pounds of meat donated by the Mahoning County Farm Bureau.

Mike Iberis, executive director of Second Harvest, said the donation “shows how the people of this community come together when friends and neighbors are in need.”

“That was a temporary spike that will hopefully go back to a lower level” as people return to work and their pre-pandemic routines, Iberis said.

Iberis said Second Harvest has been preparing for months for another spike as COVID-19 cases soar across the state.

The meat donation came after the Mahoning County Farm Bureau heard about a meat shortage, and a greater need of families needing meat, said Jenifer Pemberton, president of the bureau.

During the height of the pandemic, Pemberton said there wasn’t necessarily a shortage on meat, but rather the supply chain was temporarily out of commission.

For example, she said, some meat packing plants had to shut down due to virus outbreaks at the facilities as well as many stores putting limits on dairy and meat products.

“It wasn’t that the animals aren’t available,” she said.

“Our key was, we really wanted to make sure we paid the farmers” and the processors, she said. “We felt like everyone was in need.”

That’s when the bureau linked with Horst Packing, Inc. of Columbiana, Pemberton said.

The bureau worked with local farms who lost contracts due to the pandemic, he said.

While many jobs have been lost or furloughed over the last several months, that isn’t the case with the meat processing industry.

In fact, the company is booked into early next year, currently processing 20 cows and about 20 hogs weekly.

Bailey said there is “no let up in sight” as employees are working extended hours to prepare meat.

Nearly 21,000 meals will be provided because of the donation, Iberis said, and will be distributed through the food bank’s 160 agencies in Trumbull, Mahoning and Columbiana counties.

Assisting volunteers at the food bank were 25 National Guard members that have been assisting daily during the pandemic, Iberis said.

The soldiers help with distribution, sanitation “and any other duty that the food bank” finds necessary, Iberis said.

“Without the National Guard in the last few months, we just couldn’t do it.”