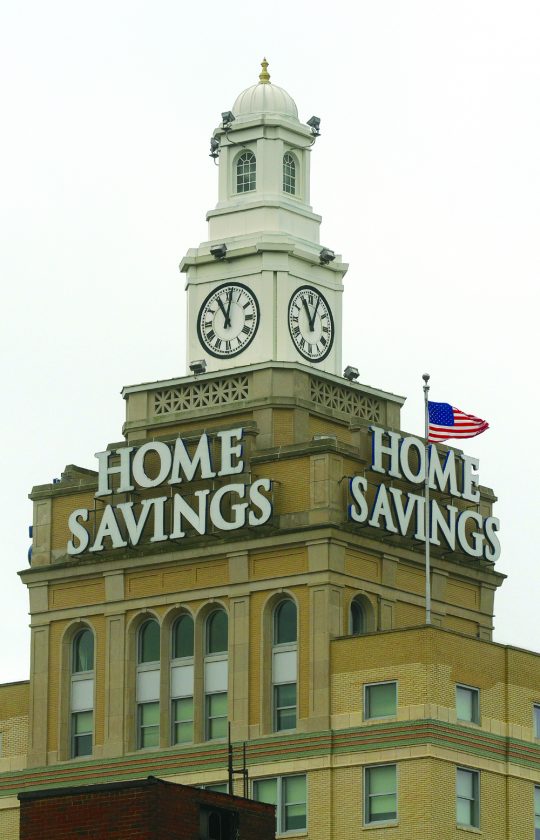 YOUNGSTOWN — The illuminated Home Savings signs that sit near the top of the downtown bank building — and are visible for long distances — are coming down and will be replaced as the result of a merger that changes the name to Premier Bank.

The city’s Design Review Committee approved plans Tuesday to replace the Home Savings signs on the four sides of the building at 275 W. Federal St.

In their place will be illuminated “Premier” signs with a “P” monogram that resembles a map location pin on the north and south sides of the building and just the “P” logo on the two other sides.

The illuminated aluminum signs will be up shortly, said Jeff Prymas, vice president of Gardner Signs, the Toledo company installing the signs.

“We will be cutting away the section that holds the Home Savings signs,” he said. “The masonry will be repaired as required.”

Home Savings merged with First Federal Bank of the Midwest, located in Defiance, in January. The companies chose to change their name to Premier Bank. The new name will be used starting next week.

The new company has assets of about $6 billion and operates 78 branches in Ohio, Michigan, Indiana, Pennsylvania and West Virginia.

The downtown Youngstown location, which was Home Savings Bank’s headquarters, opened in 1919.

The Home Savings logo was installed, just below the tower and clock, in the 1950s. Because of its location and illumination, it is quite visible.

Also Tuesday, the committee gave its approval to a housing strategy for the city developed by the Youngstown Neighborhood Development Corp. City council and the planning commission also need to adopt the proposal.

The strategy seeks to make better use of abandoned properties and demolish those that are in poor condition, address nuisance properties, adjust the zoning of residential neighborhoods and address lead paint in houses, said Ian Beniston, YNDC’s executive director.