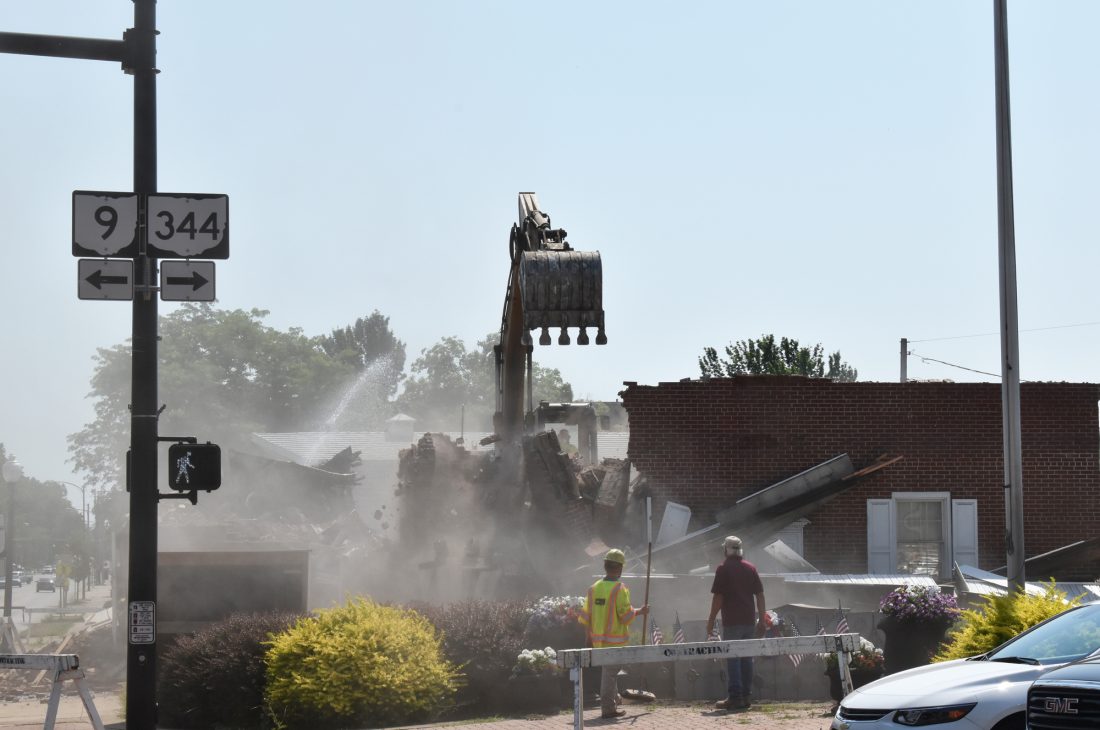 SALEM — The iconic former Salem Area Chamber of Commerce building at Lincoln and State bid its final farewell Tuesday, reduced to rubble in a matter of hours.

Some looked at the demolition as a sad occasion, others as an opportunity for development and still others as a chance to preserve some of the parts.

“We don’t have any plans at this point,” owner Ben Dickey of Armadillo Development said when asked what’s next for the corner lot.

Dickey purchased the property, along with two other buildings and a piece of vacant land on adjacent parcels purely on speculation when they came up for sale. He said previously that he had no specific development ideas, but indicated opportunities might present themselves once the properties were leveled, for a clearer vision of the possibilities.

Even thought they felt sad watching the building come down, chamber officials said selling it was the right move. 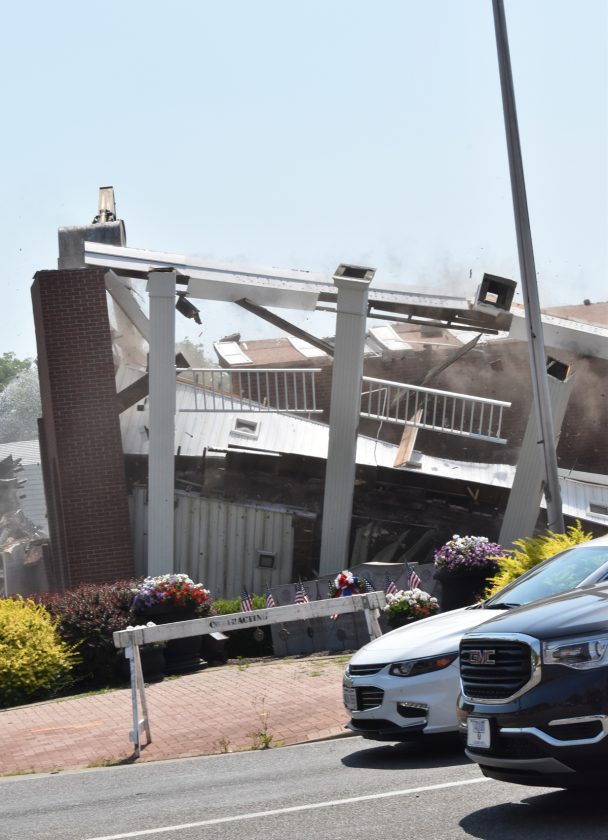 He did admit he was surprised at how quickly the building was coming down during the excavation, adding “we knew it was in bad shape.

George Less and his excavating crew made short work of the two-story structure topped with a cupola and a front view which featured classic pillars. They started on the south side of the building, then the east side, then the north side facing State and finished with the front wall facing west.

The chamber foundation, which previously owned the building, and the chamber board which called it home for many years announced several months ago the building was being sold due to needed repairs being too costly. The chamber and the United Way of Northern Columbiana County moved into a leased space, still on State Street in downtown, in June.

“It’s sad but I know it’s for the better. I’m glad everything was salvaged. The building served a lot of good purposes,” Salem Area Chamber of Commerce Executive Director Lori Jewell said. 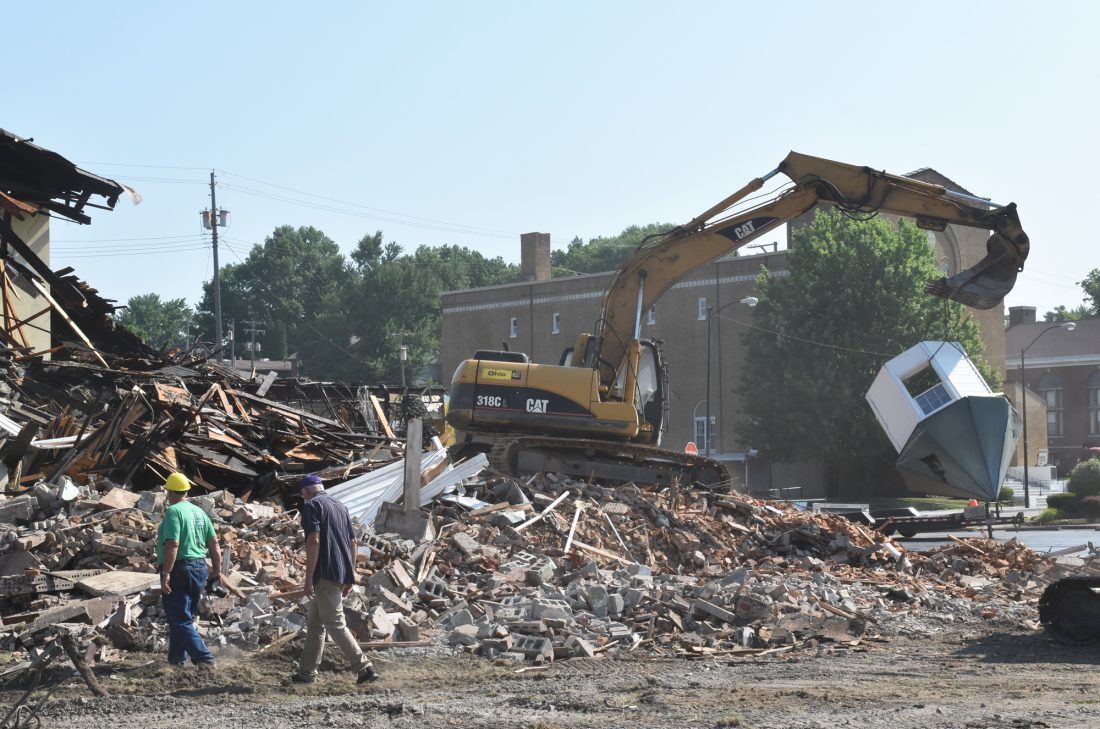 Besides housing the chamber, the location previously housed the American Legion and the First Baptist Church.

David Stratton of the Salem Historical Society said it’s unfortunate that the demolition had to happen, but repairs were too costly. The Salem Historical Society became the recipient of some of the historical artifacts, such as a stone tablet that had been installed in the second story area of the north wall. All that’s legible is the year 1869 and he said he’s assuming that could represent the year the building was built. He said the First Baptist Church purchased the lot in 1867.

Also saved was the plaque on the front of the building dubbing the front lawn as the Village Green, dedicated in 1956 during Salem’s sesquicentennial celebration.

There’s also the fountain which featured a Mullins statue. Stratton said it’s in storage for now while they try to determine a new location. Some other materials were also turned over to the Salem Historical Society.

Elwood Woolman, a director on the Canfield Fair board, waited patiently watching the demolition to see if the cupola at the top would be salvageable. Another fair board member was there to record the event and Less the excavator also serves as a fair board director. 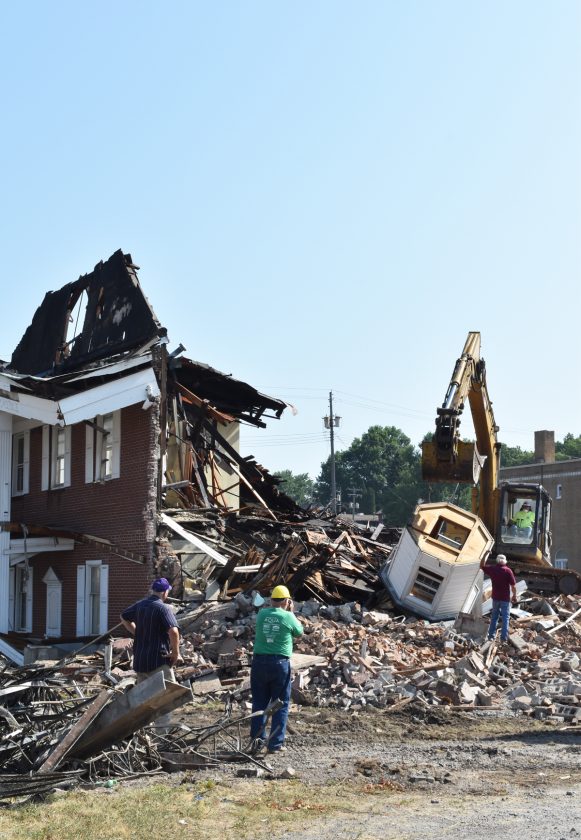 Fair officials check out the cupola in the wreckage of the former Salem Chamber of Commerce building. (Salem News photos by Mary Ann Greier)

Woolman said the plan was to save whatever part of the cupola could be saved and then make repairs to preserve it for use on a building at the Canfield Fairgrounds. He wouldn’t say which building, saying it’s going to be a surprise to be unveiled at next year’s fair, which will be the 175th.

He said it’s a good way to repurpose something for what they were already planning to do anyway. He liked the history behind it in Salem, with the church, and noted that many from this area take part in the fair.

“We’re very appreciative of Ben Dickey to help with this. He’s been more than generous,” Woolman said.

The cupola slid off and fell on its top, but managed to hold together although it broke off of the base and the weather vane was missing by the time it landed. The cupola was chained up and lifted away for the trip to its next destination.

During the city council meeting Tuesday night, city Service/Safety Director Ken Kenst addressed the demolition, saying it was just another example of how the electric and service departments, police department and fire department work as a team. 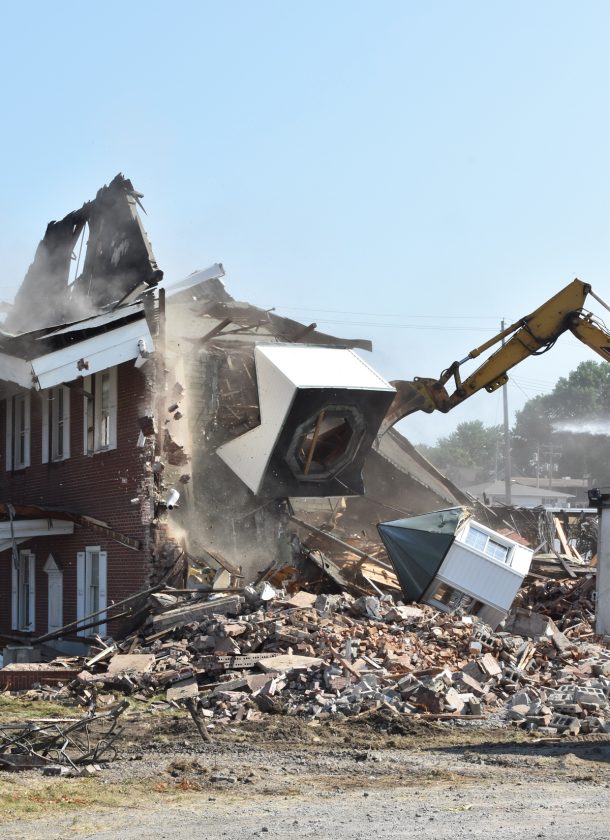 They learned Monday that the building was set to come down and made sure barricades were out for the truck detour at Southeast Boulevard and Dodge Drive and that officers were stationed at either end of State Street to ensure trucks didn’t go through.

The fire department brought a pumper truck to the site and hosed it down occasionally to ensure the dust was kept down and the city workers helped get the street cleaned up so it could be reopened quickly.

Councilmen Roy Paparodis, Steve Faber and Dennis Plegge all said it was sad to see the building go. There were a lot of memories associated with it, they said.

Still intact on city-owned property at the tip of the corner is the war memorial and flag pole. Both may be moved at some point, but nothing has happened yet. 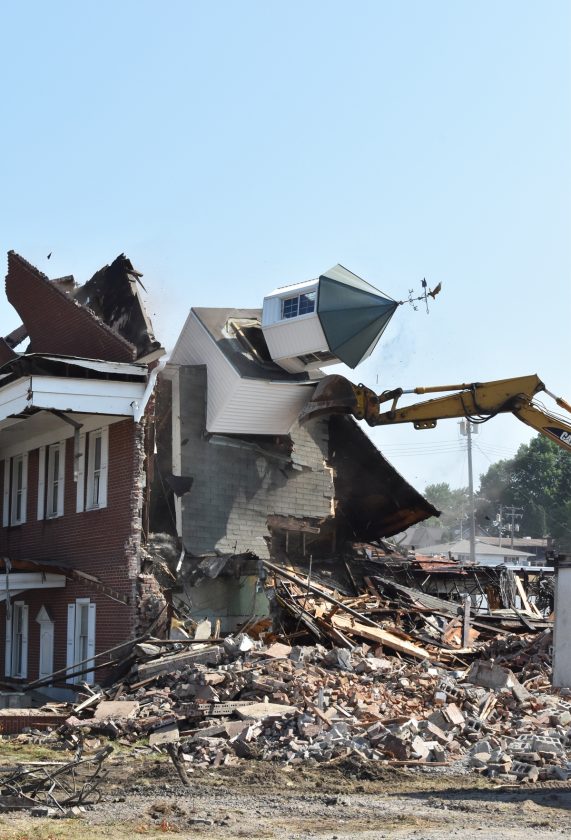 Top photo, the cupola on top of the former Salem Area Chamber of Commerce building at Lincoln and State begins its descent during the demolition of the building Tuesday morning. Canfield Fair board members plan to salvage the cupola for preservation at the fairgrounds. 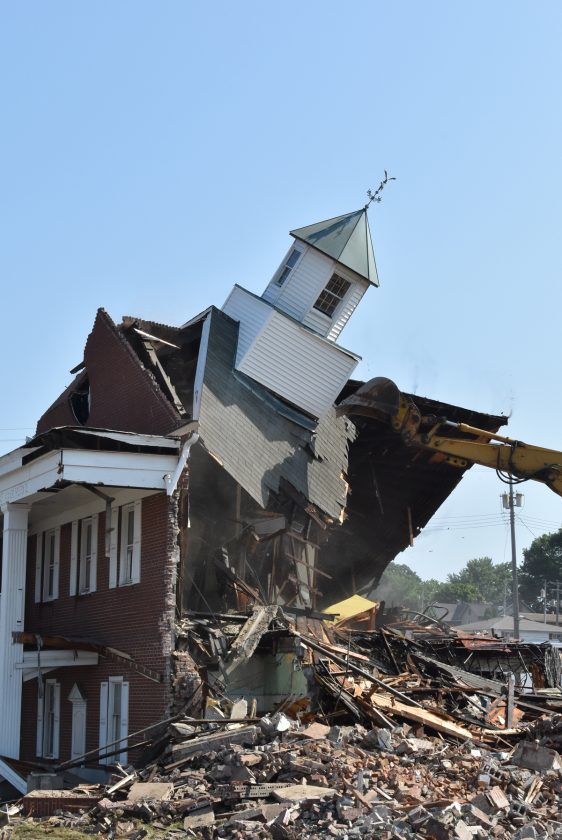 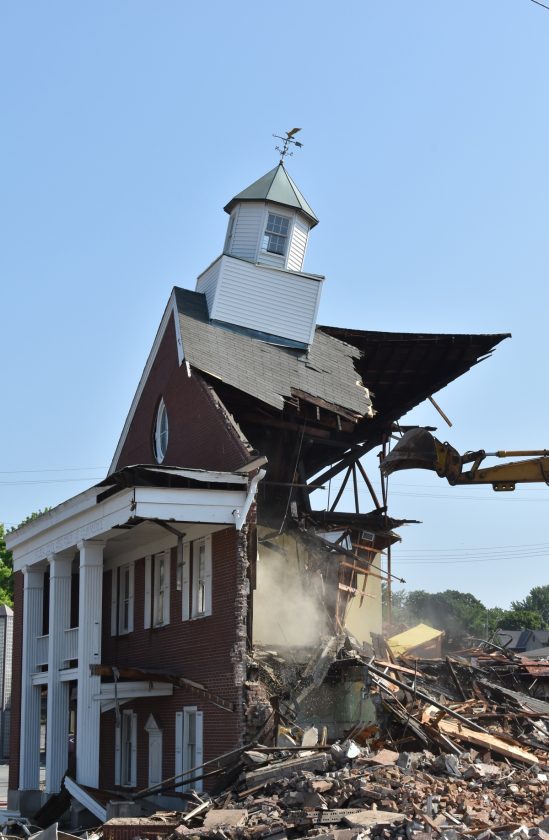 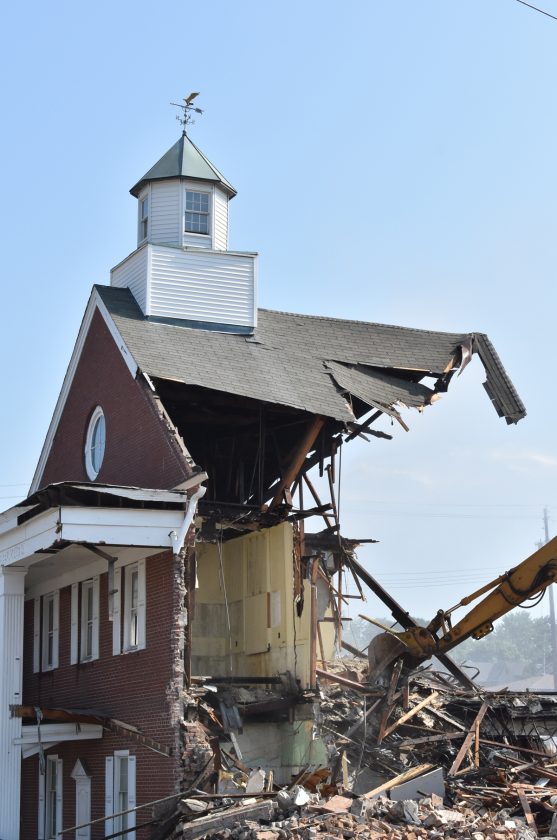 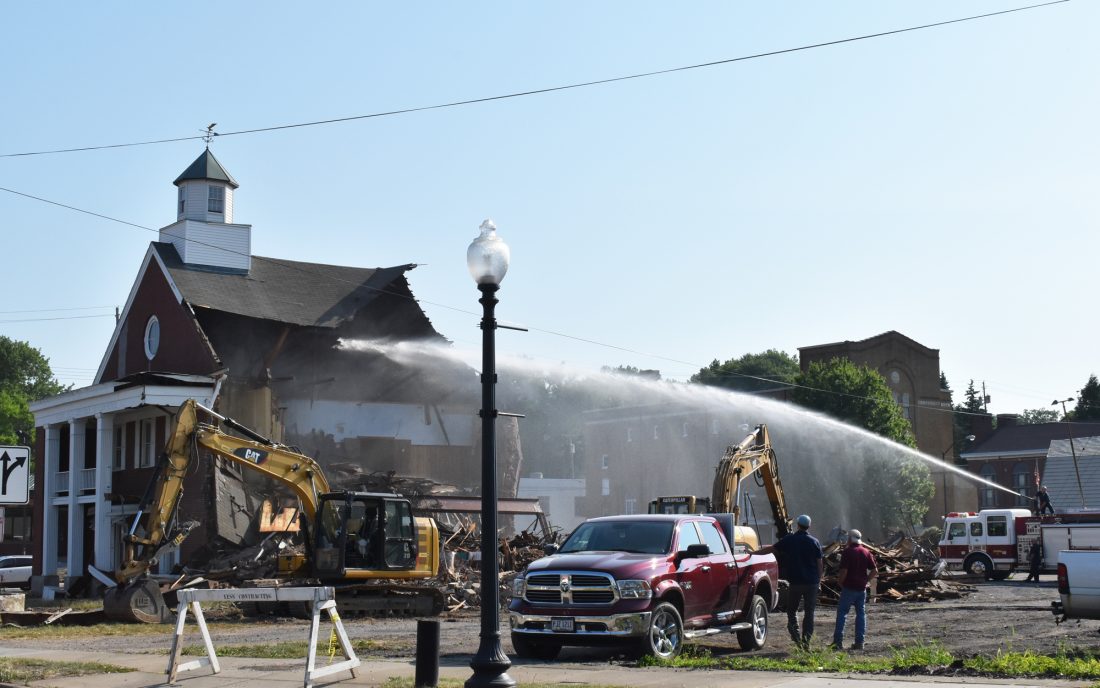 Property owner Ben Dickey of Armadillo Development and excavator George Less stand next to a pickup while watching the Salem Fire Department hose down the dust during the demolition of the former Salem Area Chamber of Commerce Building. Dickey purchased the building for development with no specific plans in mind. (Salem News photo by Mary Ann Greier) 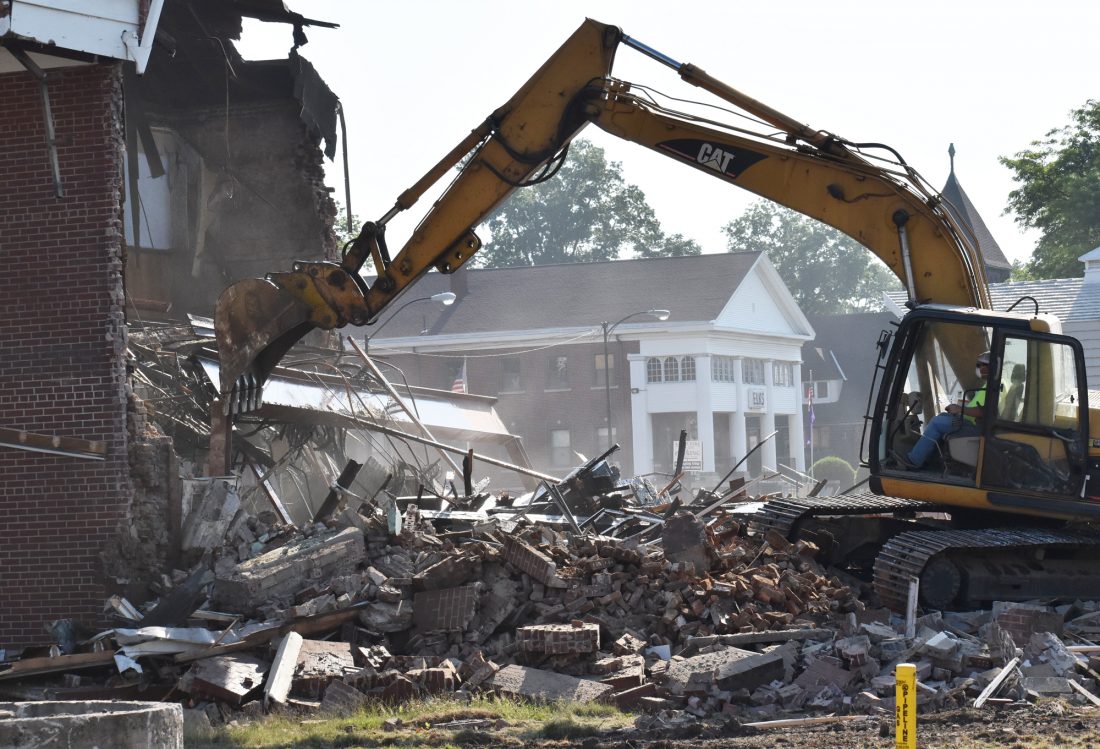 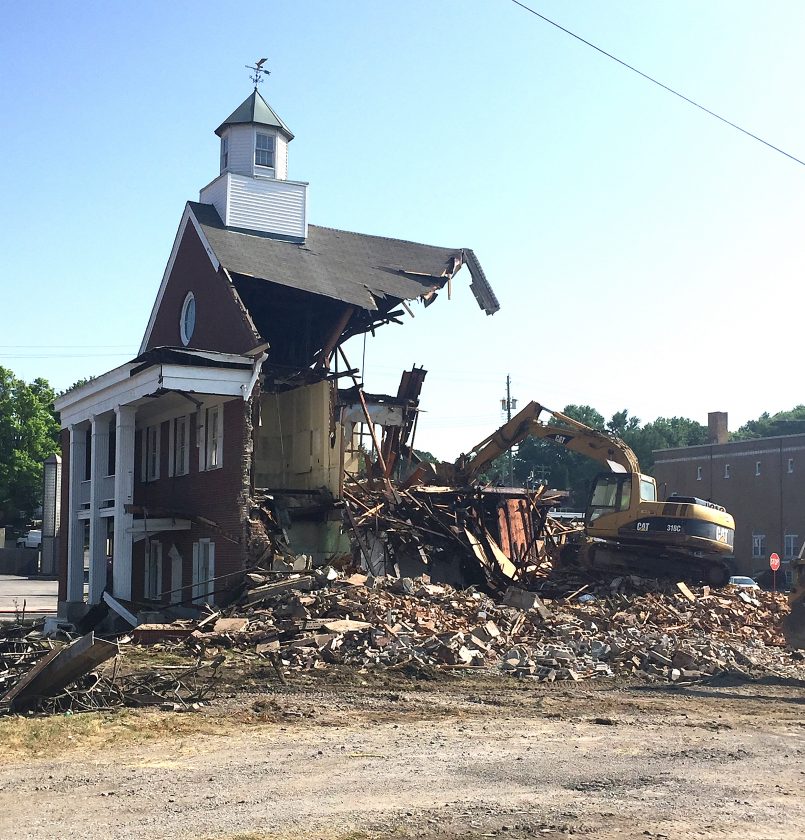