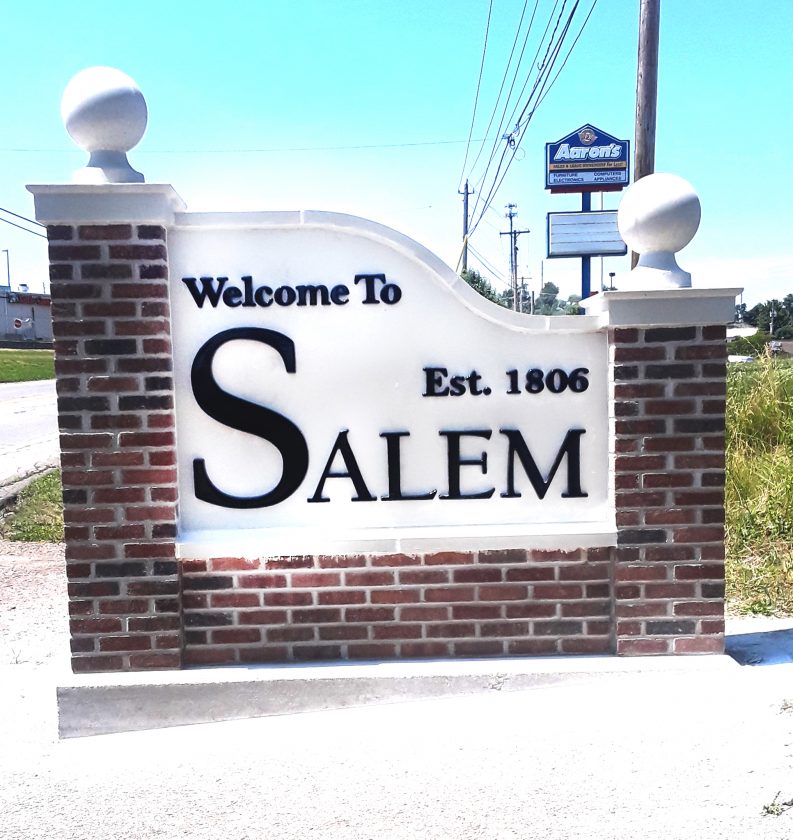 SALEM — The third of four entranceway signs for the city of Salem now stands on East State Street, welcoming visitors to the city founded in 1806.

Located along the westbound lane just below Aaron’s and Walmart, the sign was recently completed, with a fourth sign planned for West State Street in the future.

Chamber Executive Director Lori Jewell explained that signs already installed on North and South Lincoln, both in residential areas, say Historic Salem with the date. For the signs on East and West State streets, the decision was made to change it up a little.

“Since those areas are commercial, we wanted to change to ‘Welcome to Salem,'” Jewell said.

The side of the signs people see when leaving the city all say Now Leaving Salem and have the image of the Quaker Lady on them.

The project started with a design contest and the winner selected in 2014. The chamber is covering part of the cost and city council agreed then to provide a match.

During the city council meeting this week, Mayor John Berlin asked for approval to spend up to $6,000 for the city’s share for the fourth entranceway sign. The money had already been appropriated in the budget from the council contingency fund, which can be used for projects beneficial to the city. City council approved.

Installing signs to introduce visitors to Salem was one of the projects suggested in the Salem Area Sustainable Comprehensive Plan released in 2008 with assistance from OSU Extension.