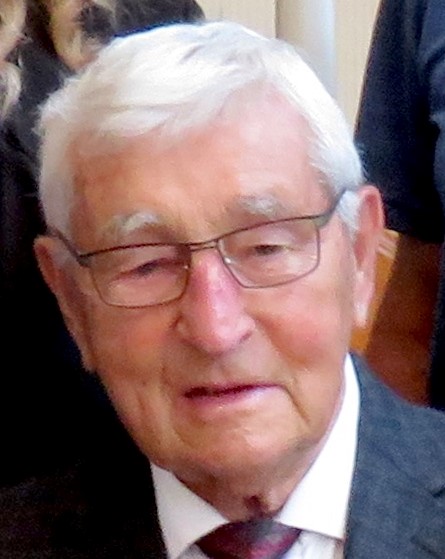 SALEM — Ralph A. Witmer, 92, died Tuesday after one day of hospice care at Salem Community Hospital following a short illness. He fell ill at home on Friday, Aug. 16, on the 68th anniversary of his marriage to the former Doris Blosser.

Born June 12, 1927, at home in southern Beaver Township, Mahoning County, he was the son of the late Enos and Hannah (Wenger) Witmer. He graduated from Greenford High School in 1945, the first in his family’s history to complete high school.

Ralph worked on the family farm before taking over Witmer Implement Sales in 1951, a Minneapolis-Moline tractor sales and repair service established by his father on their home farm in 1937. He expanded the sales and service business after it moved to its current site on Route 14 west of Columbiana to become a full-service farm equipment dealership. In 1969 he added Witmer Construction as a parallel business. It continues under family ownership.

In 1982 he and Raymond Horst and their wives were founders of Das Dutch Haus Restaurant. The restaurant grew from 60 to 450 seats over time as the development came to include a plaza with a variety of shops as well as the 52-room inn and event center now known as Best Western Plus Dutch Haus Inn and Suites–all on the same campus in Columbiana and all still owned by the partnership.

Ralph served locally on the boards of South Range Local Schools (from 1969 to 1985), the Ohio Farm and Power Association, the New Waterford Bank, and Harmony Village Inc. of Columbiana. He served nationally with the U.S. AGCO Dealers’ Council and Federated Insurance Advisory Board.

He and Doris were members of the Laurelville (Pa.) Mennonite Church Center Association. They were longtime supporters of Eastern Mennonite University (Harrisonburg, Va.) where their nine children and many of their grandchildren attended.

He led a cappella hymn singing for more than 50 years at Midway Mennonite Church, where he was a member.

Memorial contributions may made in Ralph’s honor to the Ralph Witmer Memorial Fund at Midway Mennonite Church (13376 Columbiana-Canfield Road, Columbiana OH 44408) or to the Rescue Mission of the Mahoning Valley at 962 Martin Luther King Jr. Boulevard, Youngstown Ohio 44510 or online at www.rescuemissionmv.org.

The Seederly-Mong & Beck Funeral Home in Columbiana has been entrusted with the arrangements.

Family and friends are invited to visit www.seederly-mongandbeck.com to sign the guestbook or send private condolences.