BELLAIRE — A pair of former Cincinnati Bearcat football players headline the first group of inductees to the Ohio Valley Athletic Conference’s Hall of Fame Class of 2018.

Beaver Local alumnus Adam Hoppel and Steubenville graduate Zach Collaros will formally join the OVAC Hall of Fame, which is sponsored by Robinson Automotive Group, at the induction ceremony, which will be held on Aug. 18 at WesBanco Arena in Wheeling, which is where the hall of fame is housed.

This is the fourth year in a row that the hall of fame committee is releasing the honorees every two weeks until April rather than waiting until later in the spring.

Here’s a capsule look at the honorees from the 2000s decade:

ADAM HOPPEL (Beaver Local, Class of 2004) — Whether it was on the football field or the wrestling mat, this former Beaver Local star shined brightly during all four years of his prep career.

In earning four letters in both of the aforementioned sports, Hoppel did plenty more than just letter.

In football, Hoppel was a four-year mainstay for Coach Rich Wright’s team. He was a part of two undefeated teams and three playoff qualifiers as a standout on both lines.

A three-time, first-team all-Eastern District pick, Hoppel shined along the defensive line, accumulating 217 career tackles and 26 sacks in his career.

Along with all-district, Hoppel was named second-team all-Ohio as a senior. He was a three-time all-OVAC selection and multiple-time pick for the Columbiana County All-Star and Quad County teams.

In wrestling, Hoppel was a four-year mainstay. Qualifying for the Division II state tournament in each of his seasons, Hoppel was a four-time sectional and three-time district champion. In Columbus, he placed three times, reaching the state title match in all three of those seasons.

As a sophomore, Hoppel had his arm raised as a state champion. He was runner-up in both 2003 and 2004. As a freshman, he qualified and won two matches, but only six wrestlers placed then.

In addition to his efforts in the OHSAA postseason, Hoppel was a four-time champion at the OVAC Tournament. When he accomplished the feat in 2004, Hoppel was just the fourth wrestler ever to do so.

Hoppel finished his mat career with a Beaver Local record of 154 victories.

After electing to pursue a football career, Hoppel signed with the University of Cincinnati where he became a starter in 2006 along the defensive line. As a senior, he collected 38 tackles, had an interception and a fumble recovery. He had his career high of seven tackles in the Papajohns.com Bowl.

After completing his college career, Hoppel signed as an undrafted free agent with the Cleveland Browns in 2009, but was released prior to the start of the season.

Currently, Hoppel owns and operates a consulting business and resides in Lisbon.

ZACH COLLAROS (Steubenville, Class of 2007) — Eligible for induction for the first time, this former Big Red multi-sport standout was a no brainer.

During his prep career, it didn’t matter the sport that Collaros played. He simply shined in them all, earning four letters in basketball, baseball and football. However, it was on the football field for Coach Reno Saccoccia’s team where Collaros made arguably his biggest impact.

Collaros was a three-year starter at quarterback and amassed an incredible 41-1 record, while helping to lead Big Red to back-to-back 15-0 state championship in 2005 and 2006. During those seasons, he broke every Steubenville passing record.

As a senior, en route to first-team all-Ohio and state player of the year honors in Division III, Collaros passed for 2,550 yards and 30 touchdowns against just four interceptions. He also rushed for 15 touchdowns and 720 yards. All told, he passed for 4,306 yards and 53 touchdowns, while running for 1,304 yards and 25 touchdowns.

Collaros wasn’t a one-way player, either. He shined at defensive back, recording 14 interceptions. He ran six of those back for touchdowns, while also recovering five fumbles and scoring on two of those.

On the baseball field, Collaros was the starting shortstop basically from day one of his career for Coach Fred Heatherington’s ultra successful program. He started on the Big Red state runner-up team in 2004 and had the team’s lone hit in the game.

In basketball, Collaros earned first-team all-OVAC as a junior and senior. He finished his career with 1,203 career points, which is fourth-best in Steubenville history. He averaged 19.8 points a game as a junior and 16 as a senior.

Upon completing his prep career, Collaros accepted a scholarship to play football at Cincinnati. He was a four-year letterman with the Bearcats and became the team’s starting quarterback as a junior.

He earned all-Big East honors after passing for 2,902 yards and 26 touchdowns. He led the conference in passing yards per game (263.8), passing yards (2,902) and total offense (282.2). As a senior, he passed for 1,940 yards and 15 touchdowns, but missed more than three full games with an injury before returning to quarterback the team to victory in the Liberty Bowl.

He finished his UC career with more than 5,000 passing yards and 50 touchdowns, becoming only the second quarterback in school history to accomplish such a feat.

Collaros signed asn undrafted free agent with the Tampa Bay Buccaneers, but was later released. He’s spent the five seasons as the starting quarterback for the Hamilton Tiger-Cats and was traded earlier this year to the Saskatchewan Roughriders of the Canadian Football League.

GREENFORD — East Palestine’s girls basketball team had a season in which it tallied 15 wins, building upon a ... 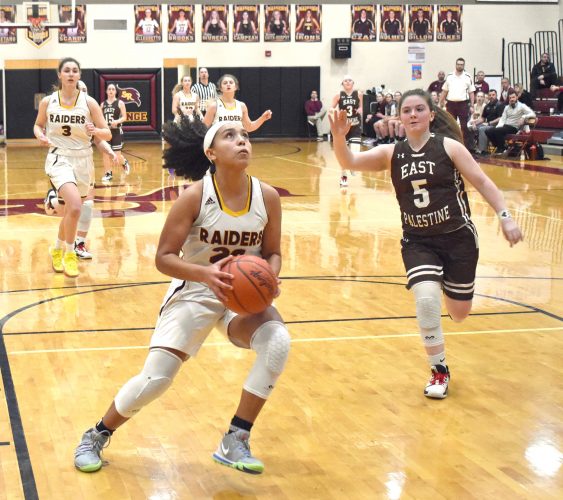 The case for U.S. leadership on advanced coal technology

Harvest for Hunger kicks off on Friday