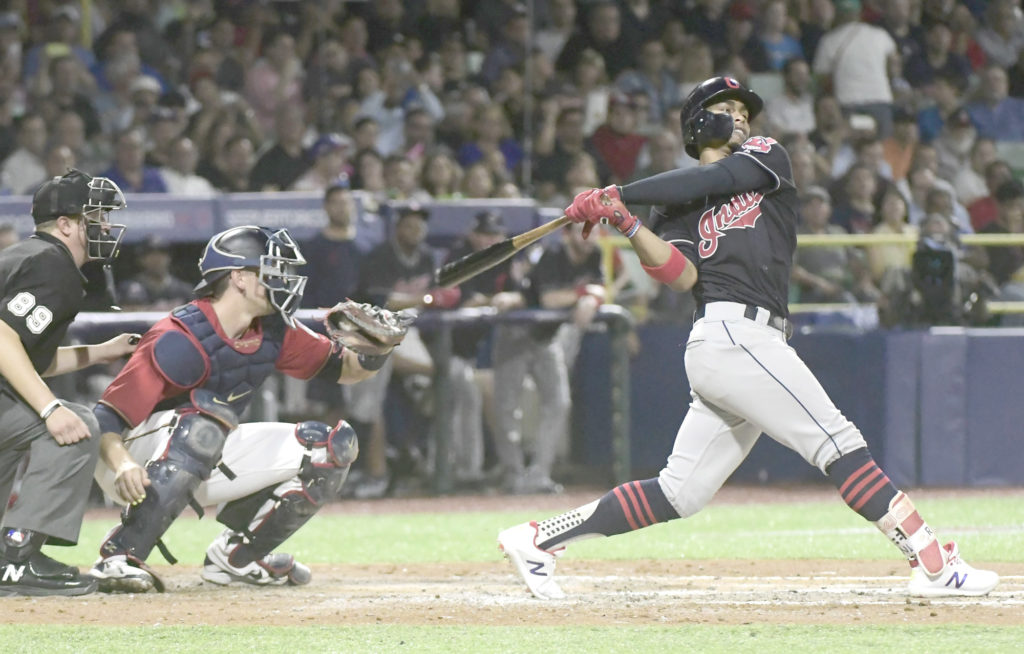 Michael Brantley and Jose Ramirez each had three hits for Cleveland in the first regular-season game on the island commonwealth since 2010. Brantley and Ramirez hit consecutive homers in the sixth, and Yonder Alonso added a solo homer in the eighth for Cleveland.

Brian Dozier had two hits for the Twins, including an RBI double in the seventh that chased a sweat-drenched Kluber after 104 pitches. Minnesota starter Jake Odorizzi (1-1) gave up six hits and four runs, all of them coming across on homers, in five-plus innings.

Twins starter Jake Odorizzi (1-1) gave up six hits and four runs, all of them scoring on homers, in five-plus innings.

Lindor and Minnesota’s Eddie Rosario were the Puerto Ricans in the lineup, and favorites of the sold-out crowd of 19,516. Fans at Hiram Bithorn Stadium will have more cheering options in Wednesday’s series finale, with the Twins sending right-hander Jose Berrios to the mound and the Indians set to start Roberto Perez at catcher.

Lindor finished 1 for 5, the homer flanked by a par of warning-track flyouts. Rosario was 1 for 4.

The series was scheduled before Hurricane Maria hit last September. The recovery from the catastrophic storm has been the focus of this trip for the Twins and Indians.

So in the fifth, he made it happen.

No. 9 hitter Bradley Zimmer hit a two-out double and Lindor worked the count full. As horns blared, inflatable thundersticks clanged and fans screamed, he turned on an offering from Odorizzi and lofted a long fly to right.

It barely cleared the wall, but it was enough.

Lindor waved both arms at the crowd after crossing the plate, then came out for a curtain call as delirious fans shouted his name. That started the undoing for Odorizzi, who was cruising before giving up three homers in a span of 10 pitches — the last two by Ramirez and Brantley ending his night and giving the Indians a 4-0 lead.

Both teams were coming off long layoffs because of bad weather. Minnesota hadn’t taken the field since Thursday, Cleveland not since Friday.

Twins CF Byron Buxton, who was slated to start and bat eighth, was scratched about three hours before game time with a headache. Robbie Grossman took his spot and started in right, and Kepler slid over to center.

San Juan’s Bernie Williams, a four-time World Series winner with the Yankees, performed “The Star-Spangled Banner” on his guitar. Carlos Beltran threw out the ceremonial first pitch, and fellow Puerto Ricans Roberto Alomar, Carlos Baerga, Javier Vazquez and Carlos Delgado were among those on the field for pregame events.

Indians coach Sandy Alomar Jr. spent most of the off day Monday at his family’s home, hanging with his parents, sister and niece. His mother cooked a staple — chicken, rice and beans. “Like old times,” he said.

The statue of Hiram Bithorn, Puerto Rico’s first big-leaguer, will be back, San Juan Mayor Carmen Yulin Cruz said. The statue outside the front gates of the ballpark toppled in Maria’s winds. “It is a metaphor for what is happening, how resilient we’ve had to be and how things will get done,” Cruz said. “Perhaps not as fast as we want, but in San Juan, we will get them done.”