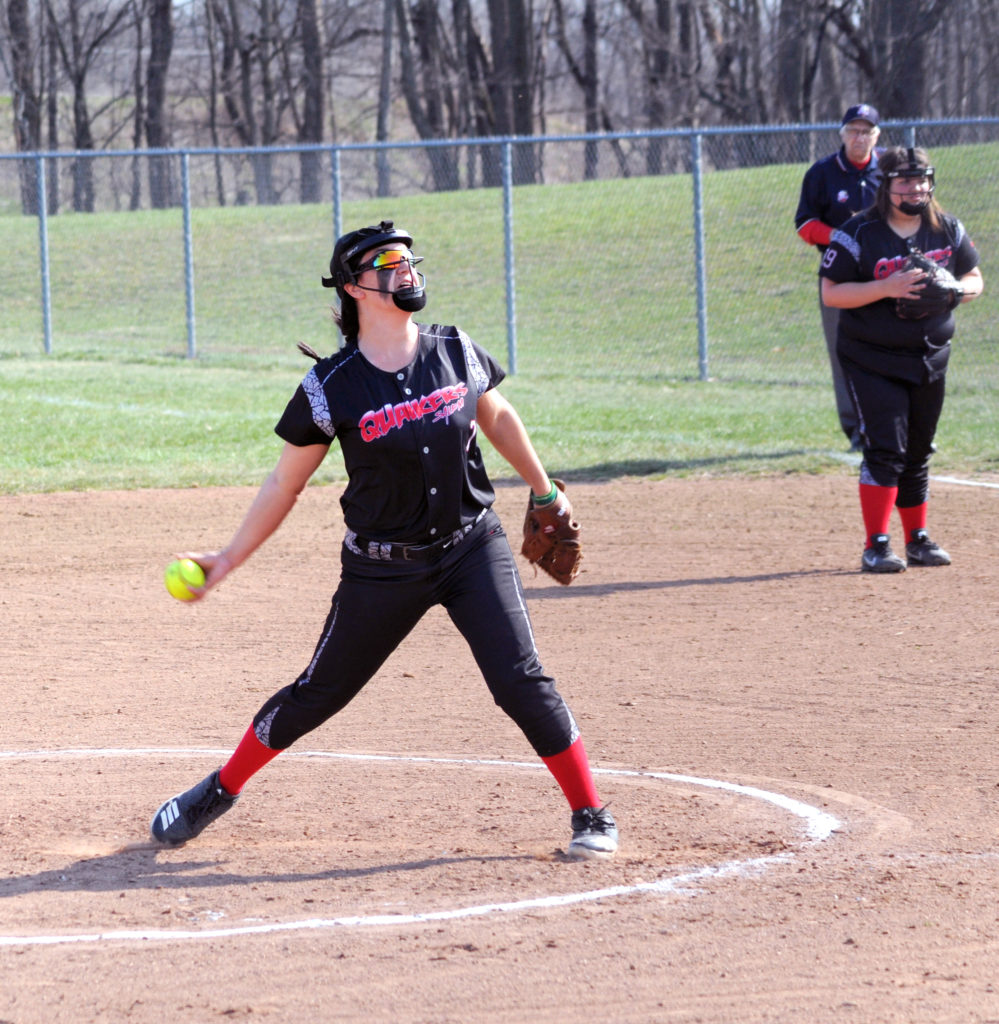 HANOVERTON — Salem pitcher Taylor Thorpe relishes any chance she gets to square off with United ace Annie Paterson and Friday was no different.

“I personally know Annie and know her game from playing travel ball,” Thorpe said. “By far, she’s one of the best pitchers we’ve faced. It’s always more fun when you’re going against someone like that.”

In a matchup of two of the county’s best pitchers, Thorpe and her teammates dug in and scratched across a pair of runs in the sixth inning to come out with a 2-0 victory at United High School.

“Paterson is probably the best pitcher we’ll see this year,” Salem coach Mike Thorpe said. “She’s very seasoned and isn’t going to be phased by anything. I’m very proud of how we persevered tonight.”

Salem improves to 7-2 overall, while United falls to 4-1.

The Quakers managed just three singles off Paterson, but were able to score thanks to some well executed bunting, a throwing error and a wild pitch.

“It’s kind of hard not to feel intimidated going up against her (Paterson), but I feel like we stepped up really well today,” Taylor Thorpe said. “We did a great job of hanging in there and battling.”

Pitching with no margin for error, Thorpe allowed just one hit while striking out 15, including eight of the first eleven batters she faced.

“Taylor pitched yesterday for us, but I think she came back strong today,” Mike Thorpe said. “She started to get a little fatigued at the end, but she fought through it and found a way.”

The Eagles drew five walks off of Thorpe but were unable to cash in with a crucial hit when they needed one.

United put runners on first and second in both the third and fourth innings and had runners on second and third in the fifth. Each time, Thorpe rose to the occasion and closed out the inning with a strikeout.

Alyssa Inman’s two-out double in the fifth was United’s only hit.

“They were able to capitalize when they had an opportunity and unfortunately we weren’t tonight,” United coach Ryan Burd said. “I thought she (Thorpe) got us to chase a lot of riseballs. Give credit to her, she’s one of the top two or three pitchers we’ve faced over the last couple of season’s. We knew coming in that it was going to be a struggle.”

Paterson, who finished with nine strikeouts and two walks, matched Thorpe zero-for-zero until the sixth.

Junior outfielder Sydney Kline began the inning by hustling out a bunt single.

“We were just trying to get people on the bases however possible,” Kline said. “We thought whoever could execute small-ball was going to win.”

Shortstop Bailee Thorn followed with another bunt and the throw sailed up the right-field line. Kline flew around the bases and came all the way around to score the game’s first run, with Thorn advancing all the way to third.

“I saw him (Mike Thorpe) sending me around third and I told myself ‘You better get your butt down there,'” Kline said. “I was running my heart out. We knew there weren’t going to be many scoring chances.”

Thorn gave the Quakers an insurance run when she came home on a wild pitch.

“Overall, I couldn’t ask for much more out of Annie tonight,” Burd said. “She brings it every night. I thought she did a nice job placing her pitches and working out of a couple of jams.”

During the past couple of seasons, Salem was frequently on the losing end of close games like Friday. However, with seven starters back, the Quakers feel their experience is starting to show.

“We’re a different team this year, we’ve had so much growth,” Kline said. “Everyone put in so much effort in the offseason because we feel this can be a really successful year. We’re much stronger in every area of the game.”

“We’re starting to pull some of these close games out,” Salem coach Mike Thorpe said. “That’s been the difference for us this year. Now that we know we can do it, I think the team will start to believe and their confidence will keep growing.”

¯ There were a grand total of three balls hit out of the infield all night.

¯ The Quakers already have played more games than most area teams thanks to an early season trip to The Ripken Experience in Tennessee.

“Those games helped us a lot,” Mike Thorpe said. “We were able to fight through some games down there where things didn’t go our way. I think it helped set a nice tone for the season.”

¯The Quakers travel to Warren Harding for a doubleheader today.

¯ United gets back into Eastern Ohio Athletic Conference play Monday at Southern. The Eagles currently sit in first place.

“Everyone is kind of beating each other up in the league right now,” Burd said. “Unlike in some years in the past, it’s a wide-open race. We have to take care of business every night and let everything else play itself out.”