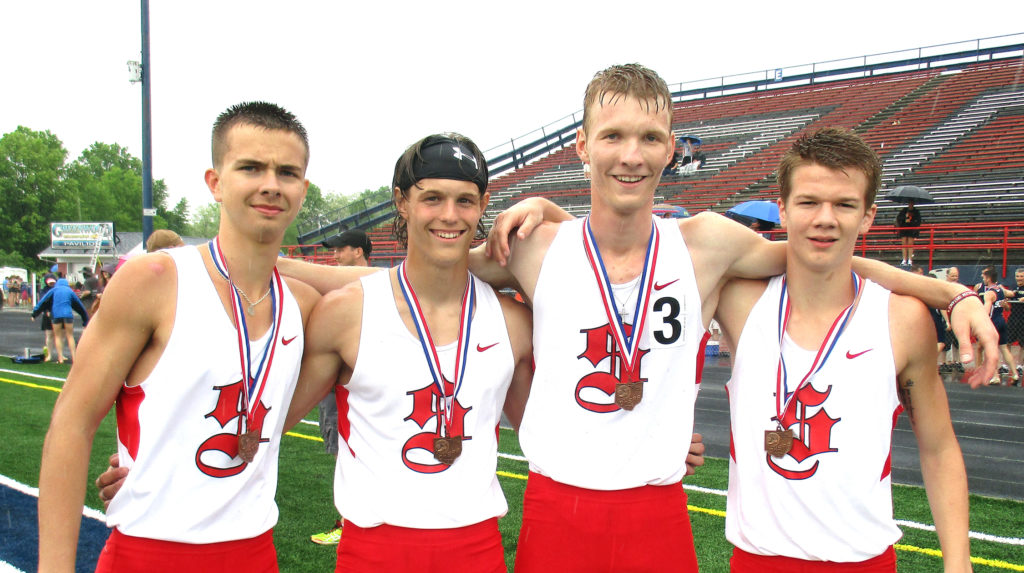 SALEM — A successful year of Salem boys track will be put to one final test this weekend as a record amount of athletes will compete on the grand stage in Columbus.

“The kids just continue to impress us,” Salem boys track coach Rob Motz said. “Every year we have a clear set of goals. Win county, win the conference and win the district. Than from there it’s see how many kids we can get to state as we possibly can.”

The last clear goal has been reached as the Quakers boys track team will be sending 10 athletes in six different events to the state track meet on Friday and Saturday at Jesse Owens Memorial Stadium in Columbus.

“If getting kids to state is the measuring stick of success, we’ve been incredibly successful this year,” Motz said. “To be able to take so many kids down to Columbus is incredibly validating for the kids and the coaching staff.”

Most suprising for the Quakers might be the boys 400-meter relay team.

“The 4×1 we had talked about scrapping it at the districts,” Motz said. “Hats off to coach Huda for putting together a mish mashteam together thinking we could score points with these guys.”

The team of Turner Johnson, Andre Tonkinson, Josh Lehwald and Zach Murray finished second in the regionals with a time of 43.52 seconds, the best in the area this season.

“They’ve only run together four times and every time they got better,” Motz said. “It’s a testament that if four guys are pulling in the same direction the sum is greater than the part.”

The preliminaries at regionals was a special time for the group.

“Prelims at regionals thats when we started to realize, wow, this might actually go,” Motz said. “They just came on and now they are one of the fast 4×1 teams we’ve ever had.”

“It was amazing that we just kept shaving time off our runs and we felt we could do it,” Lehwald said.

The 3200 relay team consists of Jackson Corbisello, Trey Double, Quinlan Rumsey and Hunter Christopher while the 1600 has Seth Ameduri, Corbisello, Johnson and Rumsey.

“I trust my teammates going in,” Ameduri said. “I try to do what Quinlan does because he’s been through this so many times.”

Rumsey and Johnson ran on the 1600 relay team that was state runner-up last year.

Ameduri, a sophmore was in Columbus last year as an alternate and now comes to the realization he will be competing.

“It’s great,” Ameduri said. “I remember watching my brother go to state when I was in grade school and I’ve been dreaming about this for a long time.”

A turn around season came for junior discus thrower Cooper Stockman, who finished 16th with a throw of 85-feet-5 at the F.E. Cope Invite in the season opener and is now heading to Columbus after finishing third at regionals with a personal-best throw of 146-7.

“Every experience with each kid is very different and it’s amazing to see his progress this season,” Motz said. “The successes that approach out of nowhere.”

Hunter Christopher will be competing in the 3200 relay.

“I’ve been coaching some of these kids since seventh- and eighth-grade so it’s amazing to see them reach their goals and their laser focus,” Motz said.

Turner Johnson finished with best high jump of 6-foot-5 and will compete individually at state for the first time after competing in the 800 and 1600 relay teams at state a season ago.

Johnson will be competing in three different events this weekend.

Motz preaches focus from his team and isn’t satisfied with just reaching Columbus as he thinks his teams can reach the podium this weekend.

“Even though it’s a different venue it’s all about being as consistent with our preparations as possible. Sometimes you get to Jesse Owens and the moment gets too big but its just a track. If you do what you’ve been doing all year you will reach success.”

•The Quakers are bringing a school-record 17 boys and girls athletes combined in 10 events for the state meet.

•A superstition that Lehwald has is changing socks after warm ups.

“I’ve always done it and I don’t know why, but I have to change my socks after warmups,” Lehwald said.