Warriors fishing for a state championship 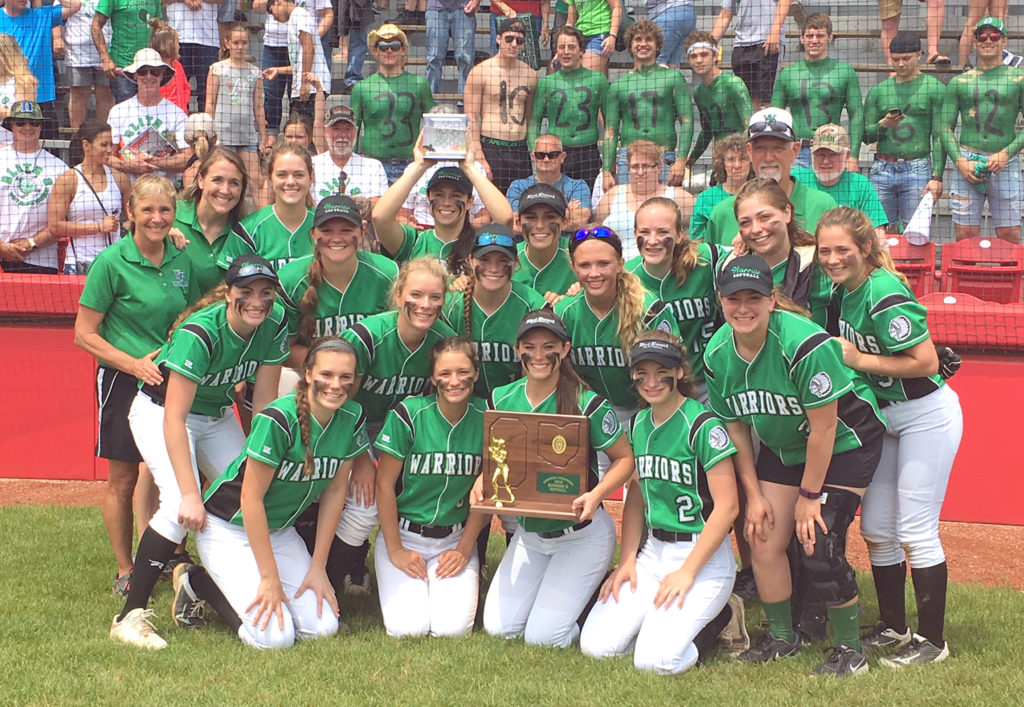 BELOIT–The West Branch softball team has been one that has exemplified team chemistry on and off the field that has kept them on course for the Warriors’ first state appearance.

“The whole year has been so great because we are such a tight-knit team,” West Branch outfielder Hannah Sprague said. “Even from the beginning we had a special bond and it’s only gotten stronger as it went on.”

A constant for this tournament run in the Warriors dugout has been the team fish named Champ. It was purchased early season and will ride with the Warriors all the way to state.

“We wanted to do something to do as a team activity so Peyton (Alazaus) said lets buy a fish,” Sprague said. “We got a fish and it has been our team fish all year.”

West Branch coach Sis Woods said the fish showed up one day in the locker room.

“They were all going somewhere and next practice there is a fish in the locker room,” Woods said. “I think that’s all I know and probably all I want to know. He’s been along to every tournament game from the bus ride to the dugout.”

This is the nature of a relaxed and close Warrior softball team who will meet Jonathan Alder in the Division II state semifinals at 10 a.m. today at Firestone Stadium in Akron.

“This week has just been a total high,” West Branch senior Kylie Coffelt said. “We’ve got so much overwhelming support from our community. Rather than being nervous we’ve been feeding off all the support and riding this high.”

Jonathan Alder (21-6) is a school a half-hour northwest of Columbus and is making its second straight final four appearance and third overall. The Pioneers made the state finals in 2014.

“I know that they have a really nice pitcher and some good hitters,” Woods said. “I always tell the girls worry about what’s on our side not on their’s.”

“It could’ve been very different if they didn’t buy into the team,” Woods said. “Any other team they would be starting every game but they have accepted switching between pitcher and first base.”

“Kylie and I always have each others backs no matter what the situation,” Byers said. “Our chemistry has been really strong since freshman year.”

On the opposing side will be Jonathan Alder’s Katelyn Perkins, who is 19-4 and holds a 1.85 ERA with 128 strikeouts.

Accepting roles has been a big part of the Warriors success starting with senior Kenzie Erb, who is second on the team with 34 runs.

“She knew coming in what her role was and for a senior to accept that is huge,” Woods said. “We’re lucky to have two hitting pitchers so she has a chance to make a difference.”

Other role changes have included Sam Morris coming in as a freshman concentrating on being a defensive catcher. Delaney Rito was originally a catcher is now the starting shortstop and Grace Heath was a second baseman is now one of the best outfielders in the area.

“Everybody accepting their roles has been huge for this team,” Woods said.

Offensively for Jonathan Alder, Jillian Jakse leads the team with a .538 batting average and 34 RBIs. Lindsey Potter has a .530 batting average with 39 RBIs along with eight home runs.

The Warriors team chemistry has the team confident for its debut on the state stage.

“I have the confidence in us that we can do it,” Byers said. “As long as we stay together as a team I don’t see anything stopping us from winning.”

“We have to do what we’ve done all year,” Woods said. “We have to bring the hitting, pitching and fielding. Like I’ve said all year you can’t control what the other team does but we control what we do.”

“We all do eye black in the same way and same order every game,” Coffelt said. “I put on Kelsey’s eye black first and than she does the rest of the team. We sit in the same places on the bus.”

• Sis Woods has been with the Warriors softball team for 32 years.

“The girls over the last 32 years have paved the way for this team,” Woods said. “These girls accomplishments have also set a great example for the youth to see what they have done to get where they are.”

• Byers has already recorded 42 strikeouts during the tournament.

¯ Byers and Coffelt have bright futures in softball as Byers will be heading to Malone next fall while Coffelt is heading to Duke.

• West Branch’s Grace Heath and Jonathan Alder’s Katelyn Perkins are both committed to play softball on the next level at Mount Vernon Nazarene University.

• In the other Division II state semifinal, top-ranked LaGrange Keystone will take on Lancaster Fairfield Union.