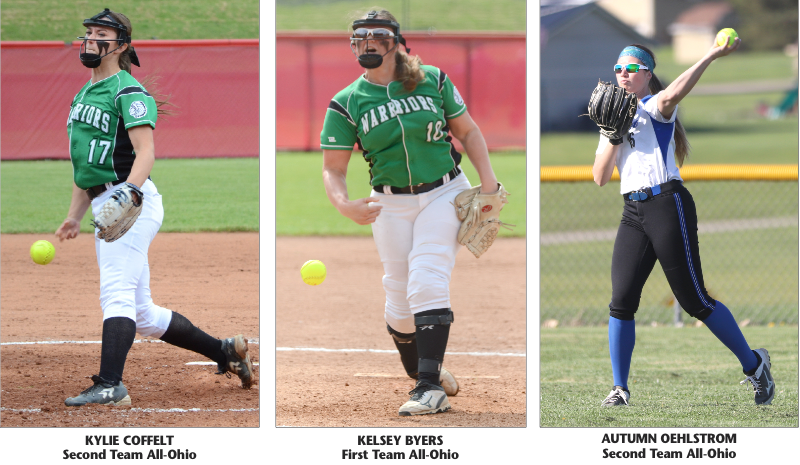 Area softball players made their mark in a big way this season and for that effort several were honored with All-Ohio distinctions by the Ohio High School Fastpitch Softball Coaches Association.

Byers and Coffelt worked in tandem to give the Warriors what West Branch coach Jennifer ‘Sis’ Woods called a true rotation in the circle.

“They both were very unselfish and complimented each other very well,” Woods said.

“They were great mentors for the younger kids on the team since they had played all four years,” Woods said.

She added the duo was 50-6 against Northeastern Buckeye Conference opponents in their high school career.

At the plate, Byers batted .387 and had 25 RBIs. She also had 11 doubles and two home runs. Coffelt batted .333 and recorded 18 RBIs. Her hit total included second doubles and five home runs.

When not pitching each played first base and both were defensive assets for the Warriors. Cofflet had a .974 fielding percentage with Byers fielding at a .970 rate.

“Normally when you have a talented pitcher like one of them, they end up pitching most of the time,” Woods said. “But we were lucky to have both of them and they never complained when they had to play first base.”

Rito was the team’s vocal leader according to Woods but she did a lot of damage at the plate with a .436 batting average and .536 slugging percentage. Rito had 48 hits including 39 RBIs with eight doubles and a home run. Naturally a catcher, Rito spent most of her time at shortstop this season and had a .979 fielding percentage, commiting just two errors.

“We asked her to play shortstop because we believed that was going to help the team the most,” Woods said. “She bought in and did an excellent job for us at shortstop.”

Oehlstrom, a University of Kentucky softball recruit, was the backbone of the Blue Devils this season. She batted .633 with 30 RBIs including 38 hits, four home runs and nine doubles. She had a slugging percentage of 1.050 and a .694 on-base percentage. She only struck out once during the season and had a 1.000 fielding percentage.

“Autumn is a next level player who no opponent wants to see step to the plate,” Lisbon coach Dave Crismon said. “She has power as well as the ability to hit for average.”

Oehlstrom was walked 12 times with many of those being intentional.

“Autumn has an outstanding arm and covers a lot of ground in the outfield,” Crismon said. “We are blessed to have her anchoring our lineup for one more year.”

Weaver was a force at the plate for the Raiders as she batted .493 with a .617 slugging percentage. In 25 games she had 35 hits including four doubles, a triple and two home runs. She also had 18 RBIs and 27 runs scored. In the field, she posted 92 putouts and a .98 fielding percentage.