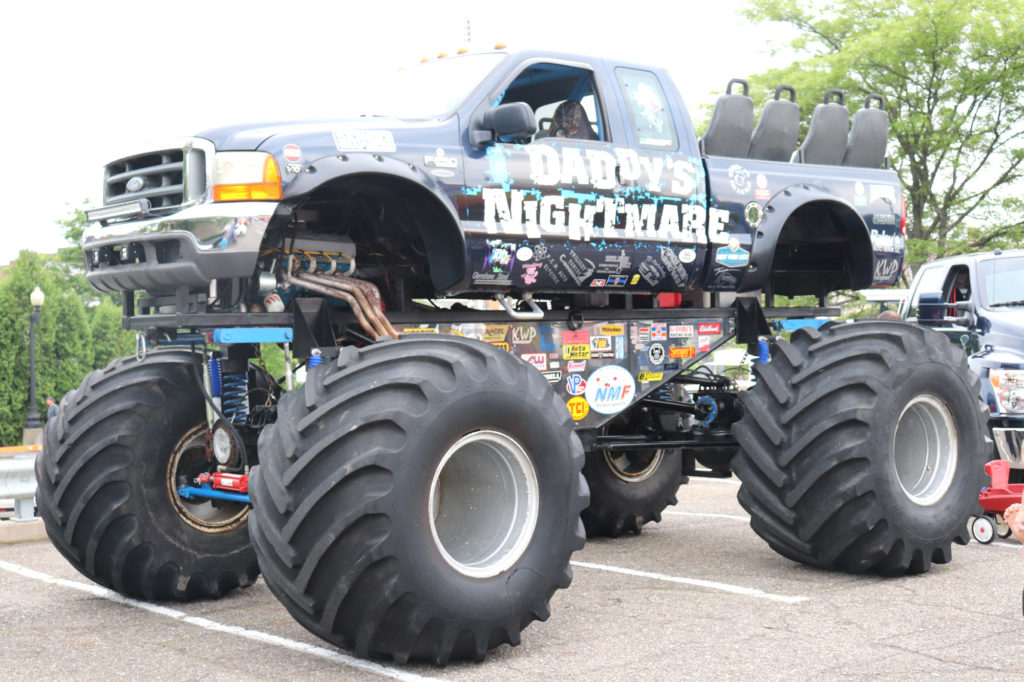 The monster truck “Daddy’s Nightmare” resided in the Second Street lot during this past weekend’s Salem Super Cruise. Bob Grill of Pittsburgh brought the vehicle to the Cruise to great fanfare. (Photo by Dan Santarelli)

SALEM — The sight of “Daddy’s Nightmare” brought out the kid in many people during the weekend’s festivities at the Salem Super Cruise.

“It brings a lot of entertainment to different events,” Bob Grill of Pittsburgh owner of the truck said. “Kids of all ages love it.”

“Daddy’s Nightmare” is a ride monster truck that Grill shows primarily at car dealerships and car shows in the Pittsburgh area.

In sponsorship with Donnell Ford Lincoln of Salem, the truck was a new attraction to the Super Cruise this year.

Prior to the Super Cruise the closest event Grill attended with the truck was the Super Nationals at the Canfield Fairgrounds.

“This truck is for sure an attention getter,” Grill said. “It brings business and attention anywhere you put it.”

Grill has said the draw of the truck never ceases to amaze him.

“We had a 96-year old lady in the back the other day and she was smiling like a little kid,” Grill said. “It never ceases to amaze me how excited people are when they see the truck.”

Grill arrived in town on Thursday and had the truck on display at the Donnell lot before taking a police escort all the way to the Second Street lot.

“That was a long drive for the truck,” Grill said. “The motor tends to heat up when you go long distances then stop.”

If you were wondering where the inspiration for the name “Daddy’s Nightmare” came from Grill said it was from a light father-son disagreement.

“My dad never wanted me to modify stuff on my trucks so it became a nightmare for him,” Grill said. “There was already a monster truck called N’ightmare’ so he said why not ‘Daddy’s Nightmare.'”

Grill has enjoyed the show and says he plans on coming back next year to the Super Cruise.

“This event is incredible,” Grill said. “Everyone is so friendly around here and there is people everywhere. For how organized this is it’s phenomenal. I hope to bring the truck back next year and even if I don’t I plan on coming myself.”