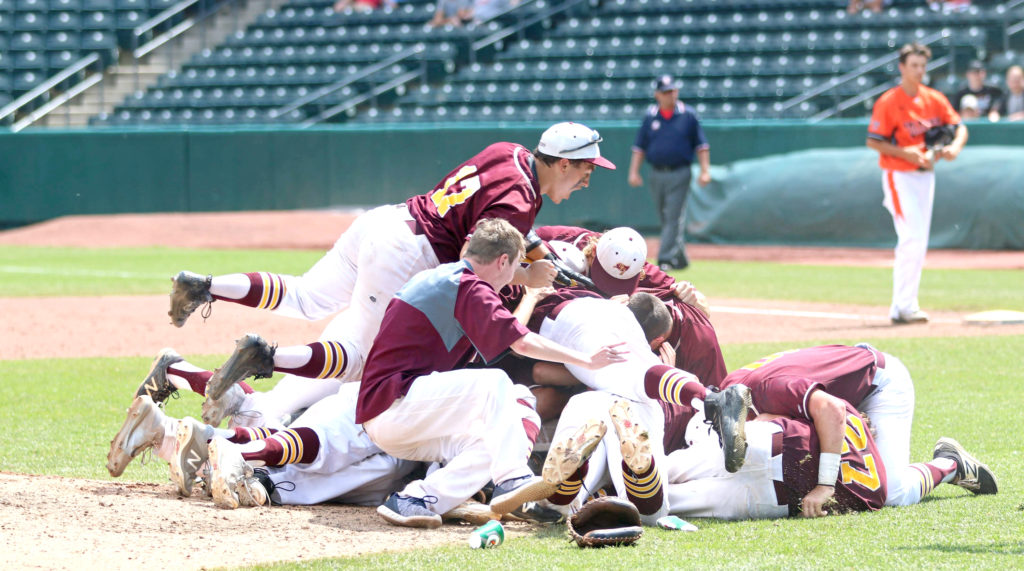 COLUMBUS–A year of milestones for the South Range baseball team became complete when the Raiders hoisted the Div. III state title trophy on Saturday at Huntington Park in Columbus.

“Being able to play with these guys is amazing,” South Range senior Brandon Youngs said. “To be able to make this run and win the schools first district, regional and be the underdogs in the state tournament and winning the state title is unbelievable.”

South Range finished an 18-15 campaign with a 3-2 win over Coldwater in the championship.

“This is so surreal,” South Range senior Mike Cunningham said. “These guys are my brothers for life and I’m so happy right now. This is one of the best experiences I’ve ever had.”

It is the first state title in school history for South Range.

“I couldn’t be happier for my players and coaches,” South Range coach Jim Hanek said. “I’m just thrilled to be able to get it done today.”

The South Range team overflowed with emotion as second baseman Kris Scandy made the final out to secure victory for the Raiders.

“When that ball was in the air I knew it was an out,” Youngs said. “I didn’t know what do to be honest.”

The go-ahead run of the game came in the top of the sixth inning when Jaxon Anderson scored on a sac fly from Jared Bajerski.

“I was thrilled my guys were able to have the determination to grind out a win,” Hanek said.

Defense was key for the Raiders in the final innings as the Raiders turned double plays to end the fifth and sixth innings.

Brandon Youngs’ spectacular fielding abilities were on display again as he speared a ball heading for right field and turned a double play at second. Jake Gehring turned a 6-3 double play to end the sixth inning.

“Big double plays were a key for us,” Hanek said. “Those were huge for us when they were threatening late in the game.”

“We knew we needed to come out and get the early lead,” Hanek said. “Even with that lead I knew they weren’t going away because Coldwater is a Division III powerhouse in baseball.”

The Cavaliers tied the game in the bottom of the fourth inning when a balk from pitcher Sam Brooks allowed Jake Wenning to come in and a sacrifice squeeze sent Nathan Grunden across the plate.

“We kind of got cold in the middle innings and they clawed their way back,” Hanek said. “This is one of the top programs in the state.”

Sam Brooks didn’t allow a hit until the fourth inning and only allowed the two runs in the fifth before being replaced by Youngs for the final two innings.

“I would have never imagined being in this situation,” Brooks said. “I always know my defense is behind me.”

Youngs only allowed one hit over the final two innings.

“Sam has been solid for us all year,” Hanek said. “Brandon was able to work two solid innings for us in a tight ball game like he has done all year.”

The celebration has started for the South Range program as history has been made.

“We got about a three-hour bus ride home and its going to be a fun one,” Youngs said. “This team means the world to me.”

¯ All current Mahoning County schools except Lowellville, Sebring, Jackson-Milton, Cardinal Mooney, Valley Christian and Youngstown East have been to the state baseball tournament at least once.

¯ South Range embraced the Cinderella role, as the Raiders only entered tournament play with a 11-15 record before the historic run to the title.

“We were playing good ball so we always reinforced that to the kids,” Hanek said. “We knew we could make a tournament run like this. The timing was right and we got hot at the right time.”

¯ South Range only allowed seven runs during the tournament.

“I love this school and I love these guys,” Youngs said. “It meant the world to be able to win a state title here.”

¯ Hanek says the future of South Range baseball looks bright with a lot of young players coming back.

“We got a wealth of guys coming back so I’m excited to see what the future holds,” Hanek said.

¯ The 2018 baseball team was the third team sport to make a state championship game appearance in South Range history including the 2016 soccer and softball teams.