Warriors advance to state final with another dramatic victory 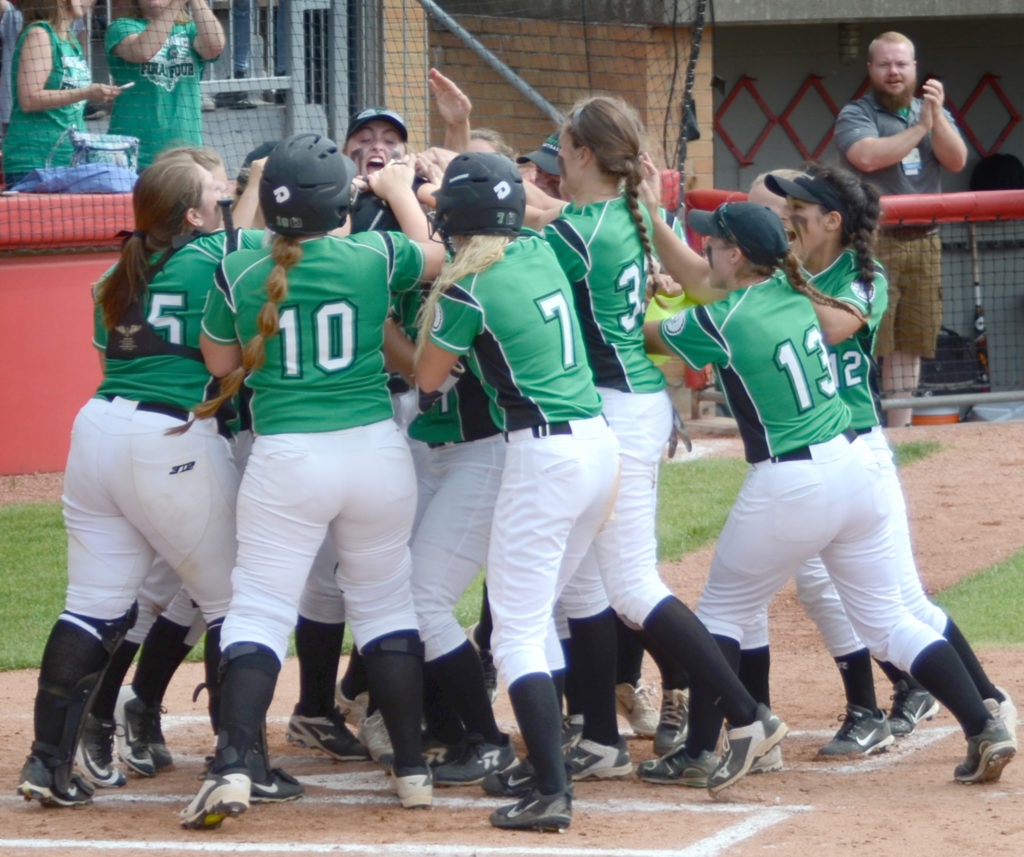 The West Branch softball team, which has a flare for the dramatic, punched its ticket to Saturday’s Division II state championship game with a pulsating 5-4 win over Plain City Jonathan Alder in a state semifinal at Akron Firestone Stadium Thursday morning.

In so doing, West Branch (27-3) will be playing for the school’s first-ever state title in softball Saturday at 10 a.m at Firestone Stadium. The Warriors will meet LaGrange Keystone (33-0) which also advanced Thursday with a 1-0 win over Lancaster Fairfield Union.

“It feels great, to be playing for a state title,” smiled West Branch senior pitcher and Duke-bound Kylie Coffelt.

Coffelt had two hits including a big two-run home run in Thursday’s game for West Branch. The Warriors once again came up big when it mattered most against Alder. West Branch scored all five of its runs in the game with two outs. It was also the fourth time in its past five tournament contests it trailed early and came back to win.

“They have believed in each other all year and have never quit,” said West Branch head coach Sis Woods. “It’s all because of these girls and the girls in the dugout. It doesn’t matter who is at bat with two outs because they always believe in each other.”

West Branch broke from a 4-4 tie in the bottom of the sixth inning to engineer a run and then left it up to its dynamic pitching duo of Kelsey Byers and Kylie Coffelt to close it out.

“They’re good,” praised Jonathan Alder head coach Dave McGrew of West Branch. “She (Byers) is one of the better pitchers we’ve seen, and they hit the ball timely when they needed to.”

With one out in the bottom of the sixth inning, West Branch began its winning rally when Hannah Sprague worked a walk off Alder pitcher Katelyn Perkins. Warrior batter Jordan Anderson then sacrificed Sprague to second on an infield groundout. Warrior junior standout Grace Heath then stepped to the plate and rifled a single through second base and into center field, scoring Sprague and making it 5-4.

It was then up to the Warriors’ pitching duo of Kelsey Byers and Kylie Coffelt to close it out against an offensive juggernaut Alder team (21-7), filled with great contact hitters. The Pioneers had averaged over 13 runs per game in their previous five tournament games.

Byers started the game and worked the first five innings before giving way to Coffelt who came in the fifth and worked 1 1/3 innings. Byers then came back in with one out and two on in the seventh and struck out Alder offensive stars Jillian Jeske and Perkins to ice the win.

“Those two pitchers (Byers and Coffelt) complement each other well,” said McGrew.

Coffelt got the win and posted one strikeout and two walks, while Byers got the save. She struck out six batters and walked just one.

“I was calm, I’ve been kind of trained to not let any of that stuff get to me, just like I was when I started the first inning,” said Byers. “Everything is falling into place, our defense, our offense and pitching. When we’re doing our job everything falls into place.”

Perkins went the distance in absorbing the loss for Alder. She struck out three and walked four Warriors. Perkins was also victimized by four Pioneer errors in the game. By comparison, West Branch had just on error.

Alder took a 1-0 lead in the top of the second when Perkins singled and advanced to second on an error. April Wagner was inserted as the courtesy runner at second and came around to score when Cierra Clark singled to right center, scoring Wagner. West Branch came back in the bottom of the third. With one out, Sprague walked and advanced to second on an infield ground ball sacrifice by Jordan Anderson. Warrior Grace Heath then ripped an RBI triple to center, scoring Sprague and making it 1-1.

“In the box, our job is to get on base and move the runner and in the field, we just have to keep everything in front of us,” said Sprague, who was 1-1 with two key walks and two runs scored for West Branch.

The Warriors were far from done in the third as Kylie Coffelt stepped to the plate and powdered a two-strike pitch over the left field wall, giving West Branch a 3-1 advantage.

“It (the pitch) was a little high and inside,” explained Coffelt of her monster home run. “I didn’t realize it (was over the fence), I just knew I hit it solid and I hear everybody freaking out and I was like halfway to first base and thought maybe I should look and I saw that thing really far away, and thought oh, OK. That works.”

The Warriors tacked on another run in the bottom of the fourth. Delaney Rito reached base on an infield error by Perkins. She was then sacrificed to second on a ground ball out by Peyton Alazaus and reached third on an infield error when the Alder first baseman came off the bag too soon on a sacrifice bunt by Destany Blake. Rito and Blake then went to second and third, respectively, on a sacrifice bunt off the bat of Riley Mesler. Sprague the stepped to the plate and hit the first pitch into left field, scoring Rito as the Warriors went up 4-1.

“They were very timely,” said McGrew of West Branch. “I don’t take anything away from them, their balls were all well hit and that’s a good team. At this point, they’re all good teams.”

Alder pulled within a run of West Branch in the top of the fifth when Emily Walker ripped a two-RBI triple to left, making it 4-3. The Pioneers temporarily tied it at 4-4 in the top of the sixth when Angela Brandel singled to center, scoring Perkins.

But that set the stage for West Branch to regain the lead for good in the bottom of the sixth on Heath’s single through the hole at second, scoring Sprague with what turned out to be the game winner. Heath, a talented hitter and speedster on the base paths had two of the Warriors’ six hits, along with two RBI’s and scored two runs.

“They came out and did their job, all of them top to bottom,” said Woods.