Warriors have no regrets 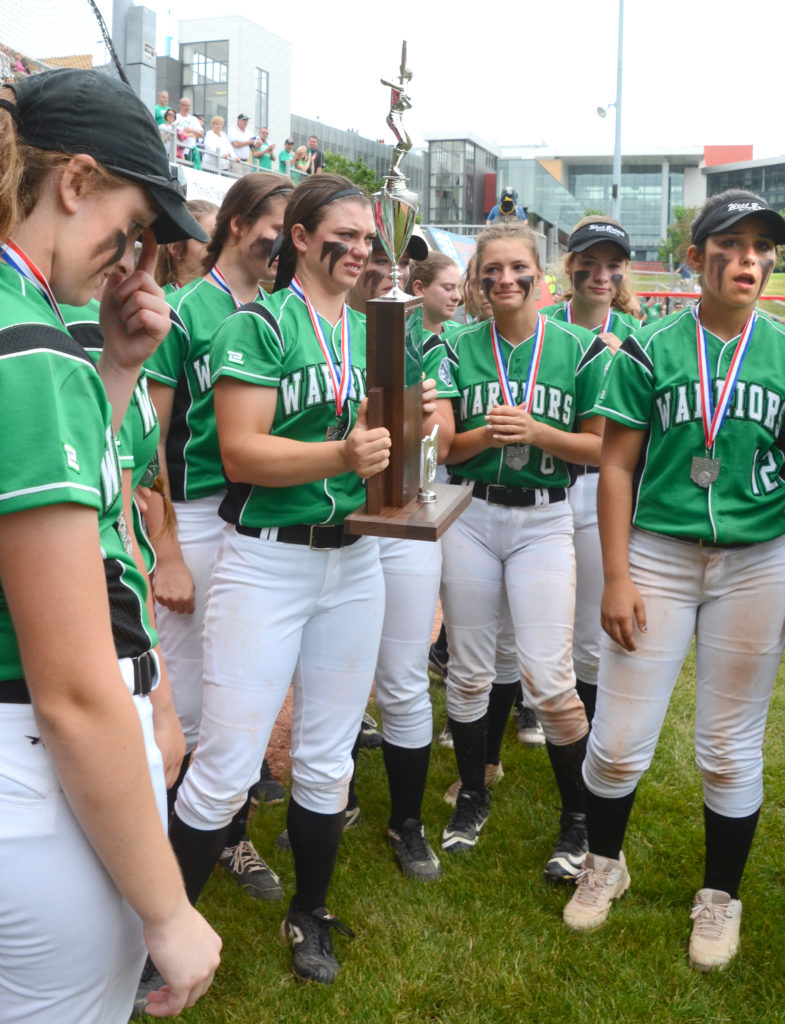 “I can’t say because I’ve never been here before, but this is what a state championship game should be like,” said West Branch head coach Sis Woods. “It’s a 3-2 game in 12 innings and I don’t think the fans could have gotten a much better game. I thought both teams played very well.”

Keystone, which has qualified for the state softball tournament a record 17 times, won its fourth state title in the sport.

It was a difficult loss for West Branch because it was so close to pulling off the win itself. But ask the Warriors and their huge fan base which accounted for two-thirds of the packed house of 2,500 and they will tell you the great ride was worth the fall. West Branch set the school record for wins this season and advanced to the state tournament for the first time while bringing home the runner-up trophy.

“It was a heck of a state championship game and couldn’t be more proud of every one of these girls,” said Woods. “They never dropped their heads, they came back and tied it up (in the seventh) and for 12 innings just kept fighting the whole time.”

The marathon game, which took two hours and 40 minutes to play and featured more twists and turns than a Cedar Point ride, was decided when Keystone’s Marlie McNulty hit a triple down the right field line in the top of the 12th, scoring Val Broschk with what turned out to be the winning run.

However, West Branch made things interesting in its last at-bat in the bottom of the 12th.

With one out, junior Peyton Alazaus, who had both of the hits for West Branch on the day, doubled to left and represented the tying run. But West Branch had two consecutive groundouts to end the game.

The loss was especially tough for the Warriors who had Keystone on the ropes in the bottom of the eighth. With the game tied at 2-2, West Branch loaded the bases on a walks to Hannah Sprague and Kylie Coffelt, sandwiched around Grace Heath reaching base on an infield error. But Keystone pitcher Sydney Campbell got out of the jam by striking out a Warrior batter for the third out.

“We had our opportunities and had some nice shots right at them,” said Woods.

“They (the Warriors) are good and we knew that,” said Piazza. “The schedule that they play, they played Champion tough twice and played Holy Name. We knew coming in with Kylie Coffelt and Kelsey Byers, how many times does a team have two All-Ohio pitchers, so we knew we were in for a game.”

For those who love great pitching, Saturday’s title contest was a classic on both sides.

West Branch’s Kylie Coffelt started the game and struck out two and walked one in 5.1 innings of work. She was relieved in the fifth by teammate Kelsey Byers, who worked the final 6.2 innings and fanned nine Wildcat batters while walking two. She was the hard-luck losing pitcher in a masterful performance.

Keystone junior pitcher, Sydney Campbell, who went through the entire sectional, district, regional and state tournament while giving up just five earned runs, was the winning pitcher. She had just three strikeouts and two walks but was successful in recording 23 ground ball outs of the 33 batters she faced. She improved her record to 29-0.

“I think she (Campbell) has only given up something like 11 runs all year,” said Woods. “They have almost their whole team signed to go somewhere (to play in college) but we played with them.”

“I thought the spin on the ball that (Campbell) had (was effective),” asserted Byers of the many ground ball outs.

The game was scoreless through the first five innings but Keystone broke through in the top of the sixth when Brooke Piazza, the daughter of head coach Jim Piazza, singled to center, scoring Madi Herrington and Val Broschk and giving the Wildcats a 2-0 lead.

West Branch pitcher Kylie Coffelt said the Wildcats were aggressive at the plate.

“They are aggressive hitters,” she said. “They jumped on our pitches early while some other teams we face waited until later in the count, and that’s how we got a lot of our strikeouts because we don’t pitch anything good.”

West Branch, which had rallied for wins in four of its five previous tournament games, came back to tie it in the bottom if the seventh. Down to their last out with runners at second and third, Peyton Alazaus hit a bloop single which fell in down the left field line, scoring Coffelt and Delaney Rito and sending the game to extra innings.

The game stayed that way until McNulty’s game-winning triple in the 12th.

¯A packed house of 2,500 fans filled Firestone Stadium for the West Branch-Keystone D2 state championship game. Approximately two-thirds of the stands were filled with Warrior fans.

“Part of our success is our following which is great,” said West Branch head coach Sis Woods. “It’s not just West Branch, it’s the community outside of us who have supported these girls because they deserve it.”

¯It marked West Branch’s first trip to the state tournament in the history of the softball program which was founded by head coach Sis Woods 32 years ago. Woods believed the Warriors’ ability to come back in many games this year was cemented early in the season.

“It all started back in February when we were practicing and I told them we never stop fighting,” praised Woods. “We’ve gotten behind in so many games. It started the second game of the season when we were down three going into the bottom of the seventh against Marlington. I believe coming back in that game made our season (in setting the table for the comeback mentality). These girls believed in each other from that point.”

¯Historic Akron Firestone Stadium was built in 1925. Babe Ruth played an exhibition game in the stadium and hit a towering home run in the early years for the facility.