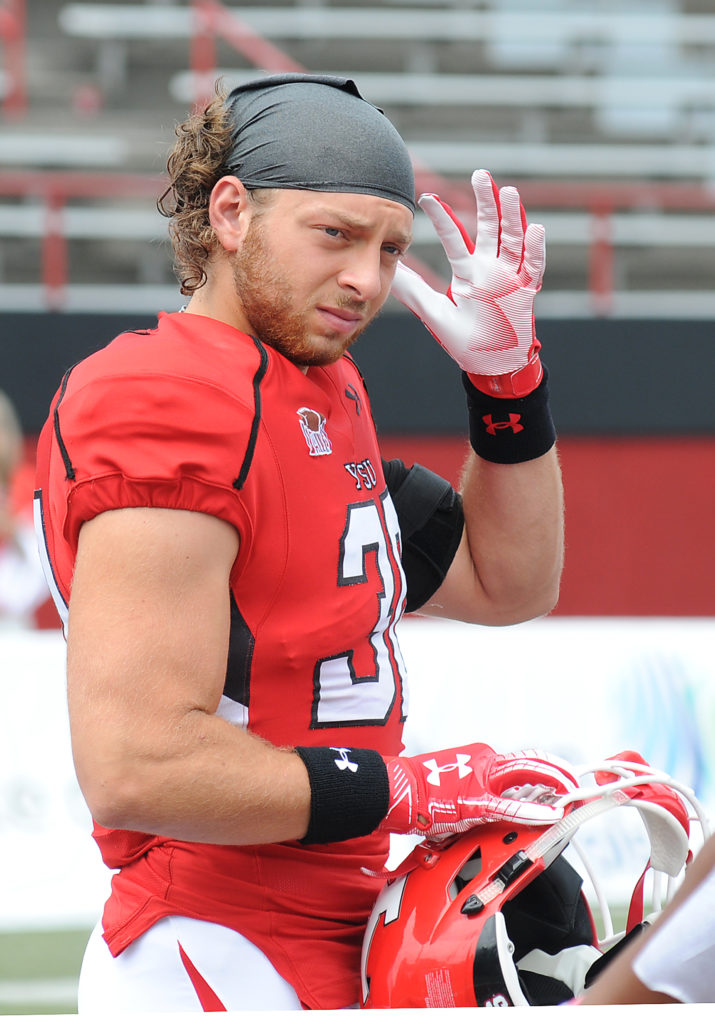 YOUNGSTOWN (AP) — Will Marty threw two touchdowns in the fourth quarter and Drew Bevelhimer drilled a 44-yard field goal with four seconds left to win it as Butler stunned No. 24 Youngstown State 23-21 on Saturday in a season opener for both teams at Stambaugh Stadium.

The Bulldogs — who came into the game as 37-point underdogs — were down 21-7 with 9:20 left in the game when Marty threw a six-yard scoring pass to Pace Temple, capping an 11-play, 80-yard drive. He followed that with a 12-yard strike to Sam Yeaton. Marty’s 2-point conversion run failed, leaving the Bulldogs trailing 21-20 with 1:20 to play.

Following a successful onside kick, Marty led the Bulldogs into field goal range and Bevelhimer made good with the 44-yard kick for the win with four seconds left.

Temple caught 14 passes for 167 yards. Marty ran for 25 yards and a first-quarter score.

Montgomery VanGorder, a senior transfer from Notre Dame, threw for 234 yards and three touchdowns in his first start for the Penguins, who had not lost a home field opener since 1996. Tevin McCaster ran for 166 yards.

The Purple Raiders have won 31 straight season openers and have a nation’s best 16-game win streak.

Mount Union quarterback D’Angelo Fulford threw for two scores and ran for two more. He generated 271 yards of total offense with 192 yards passing on 17-of-27 passing along with 79 yards rushing on four carries.

The rest of the offense was generated by running back Josh Petruccelli rushed for 115 yards on 13 carries with a score while Jared Ruth caught two touchdown passes and Justin Hill had five catches for 59 yards.

Mount Union junior kicker Max Righetti, a 2016 graduate of Salem High School, made his first collegiate field goal with a 25-yarder in the fourth quarter to close out the scoring. Righetti also averaged 64.7 yards on three kickoffs.

The Mount Union defense, which in its last game pitched the first shutout in a national title game since 1988, had second straight shutout as it held the Fightin’ Engineers to 107 yards on 60 plays.

Safety Austin White had five tackles, a sack, forced a fumble and recovered it then scampered 21 yards for a score.

Mount Union took a 14-0 lead in the first quarter on a Petrccelli one-yard TD run and a 24-yard scoring pass from Fulford to Ruth.

In the second quarter, Fulford had a 10-yard touchdown rush and Cory Barnett had a 39-yard field goal and the Raiders led 24-0 at the half.

White’s sack and fumble recovery for a score came on the opening possession of the second half then Fulford added a seven-yard touchdown run, the extra point was blocked, then he threw a nine-yard pass to Ruth to make it 44-0 after three quarters.

The scoring was finished with a Teagan McFadden e8-yard TD run and a Max Righetti 25-yard field goal.

Mount Union is off next week before opening Ohio Athletic Conference play Sept. 15 at Baldwin Wallace University in Berea.