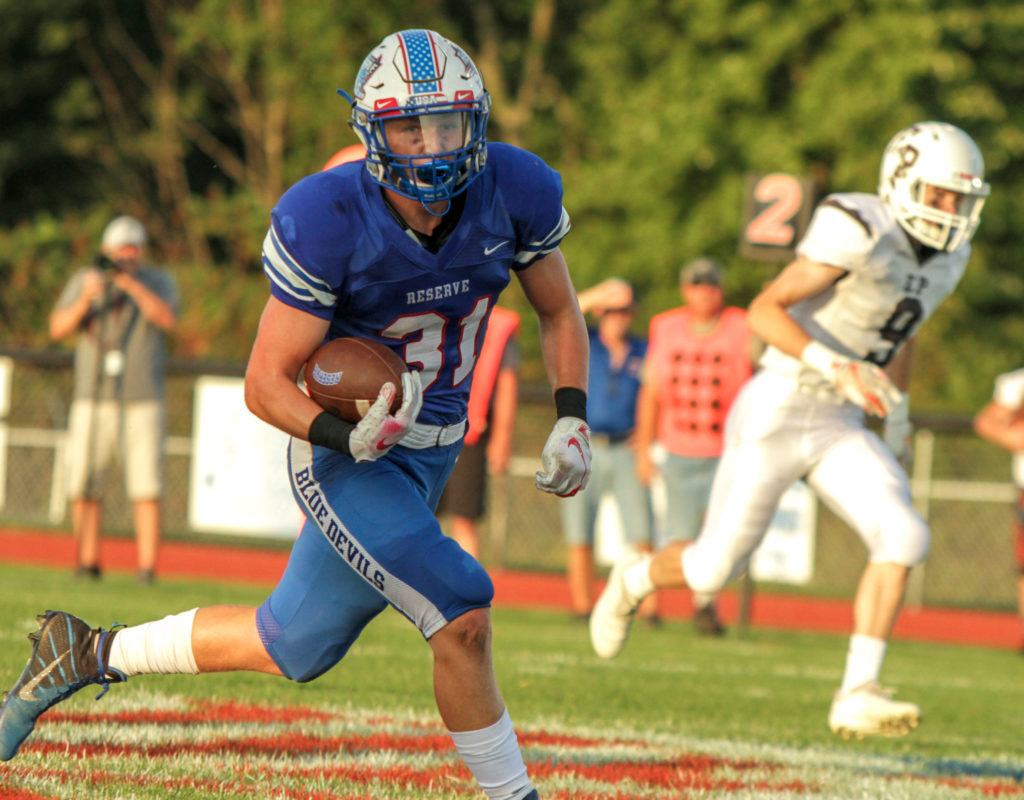 BERLIN CENTER — In a battle between league champions from last year, the Western Reserve Blue Devils pounded out a hard-fought 41-19 victory over East Palestine on Friday. That pounding was the result of 302 rushing yards by the Devils on the night.

The Devils improve to 2-0 on the season, while the Bulldogs drop to 0-2.

According to Devils head coach Andy Hake that was the whole game plan for the night, “I just wanted to keep the ball on the ground in this game because Parker (Sherry), I didn’t want him having the ball. We can throw the ball because if you go three and out then they get the ball and he is like iron man.”

Although senior running back Adam Gatrell provided most of the pounding on the Bulldogs defense, it was the Devils senior quarterback Ryan Slaven that had a big night on the scoreboard. Gatrell gained 187 yards rushing compared to just 47 for Slaven, but it was Slaven who found the end zone four times in the contest.

“No sir, never,” Slaven explained that he never accomplished that feat before. “It was the first time, and it’s a great feeling.

“Our line did a great job. They blocked so hard all game long. And Adam had some great breakaway runs moving the ball down the field. When we got close to the goal line we saw they didn’t have a nose (tackle) and the QB sneak worked,” Slaven described the key to his success on the night.

With the Devils up just by seven points at halftime, the Bulldogs rolled the dice to start the second half. Facing a fourth and three at their own 31, the Dogs decided to go for the first down rather than punt the ball away. The gamble didn’t pay off as the Devils defense stooped Sherry for a 2-yard loss.

“It’s really our approach and our attitude toward punting. We don’t like it,” Bulldogs head coach Tony Foster remarked. “Unless we are pinned into doing it and there is no other resort. We won’t do it.”

“I didn’t think he was going to punt one time in the game,” Hake said. “We thought that they felt they had to win the game, and we felt we had to win this game. We didn’t put a guy back there all week in practice. We felt wherever it lands, it lands.”

The Devils built a 20-13 halftime lead courtesy of three 1-yard plunges into the end zone by Slaven. The first came at the 8:01 mark of the first quarter. The second gave the Devils a 13-7 lead at the 6:47 mark of the second stanza. The final score by Slaven came with just 13-seconds left in the half.

The second Devils score came off a blocked Bulldog punt as Sherry kicked the ball into his blocker who was getting pressure from the Devils defense. That gave the Devils the ball at the Bulldogs 25, but more importantly, helped influence Foster’s decision in the second half not to punt.

The Bulldogs first score came on a 4-yard run by Sherry with 2:07 left in the first quarter and knotted the game at 7-7. He followed that up with a 20-yard jaunt with 5:01 remaining in the half, once again tieing the game. This time it was at 13-13.

After failing to convert twice on fourth down attempts to start the second half, the Devils took full advantage of the field position by scoring twice within four minutes. Slaven added his fourth 1-yard touchdown at the 5:06 mark of the third, followed by Gatrell racing in from 6-yards out to make it 34-13.

The Bulldogs added a 7-yard touchdown pass from Sherry to Dominic Posey on the first play of the fourth quarter, and the Devils Todd Herring raced in from 24-yards out to close the scoring in the contest.

The Dogs find themselves with a 0-2 record for the second season in a row, something that was not loss of Foster, “Last year we were in the same spot, and we can right this ship so to speak. However, we need to change what we are doing,” Foster said. “Kids can control their attitude and their effort. We need to make sure that we put us in a better spot to be successful.”

Next week the Devils will host Cambridge Springs from the Erie, Pennsylvania area. The Bulldogs will also be at home next Friday when they entertain Campbell Memorial.