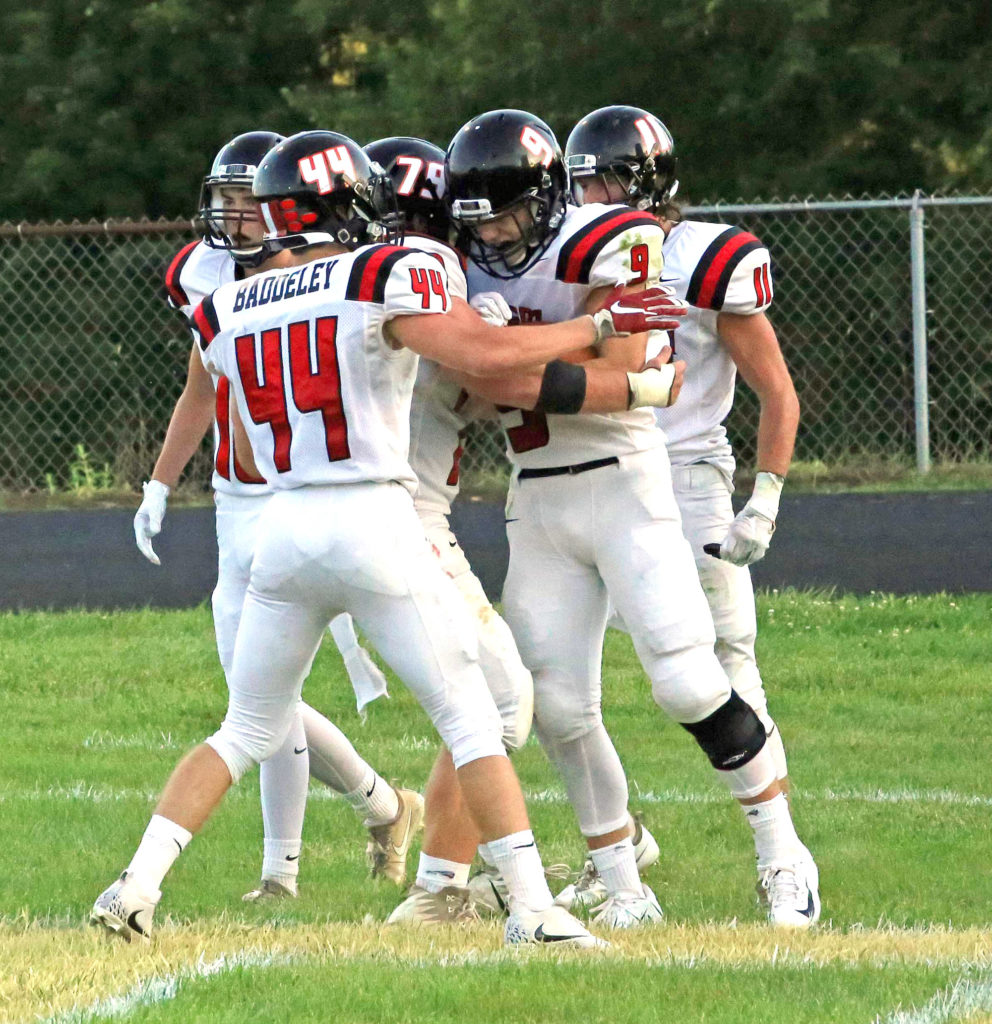 HANOVERTON — Salem High School junior playmaker Niko Walter had an electrifying 90-yard scoring return on the game’s opening kickoff and the Quakers never looked back in a 22-0 shutout of United Local before a packed house Friday night.

“That (kickoff return for a score) was a great way to get started,” smiled Salem head coach Ron Johnson.

The Quakers coupled a strong power running game on offense with a stingy defensive performance to improve to 2-0. United dropped its first game after defeating Minerva in its opener last week.

Salem piled up 262 yards of total offense, with 170 of it coming on the ground. For the second week in a row, junior quarterback Turner Johnson led the Quakers with 101 yards rushing on 16 carries. He also scored two touchdowns on a 13-yard scamper and on an 11-yard pass to wideout Josh Lehwald.

Ron Johnson loved the Quakers’ performance on the ground.

“That’s what we think we can do is be a power football team, set the tempo and just wear people down, and we did a great job,” said the Salem head coach.

Meanwhile, United was playing without it senior captain Parker Hydrick who was injured in practice this week and is likely out for the season.

“He was a starting corner and slotback and he’s a great football player,” said United head coach D.J. Ogilvie of Hydrick. “He’s a senior captain and was an all-league kid last year.”

The Golden Eagles’ coach said he couldn’t have asked for more from his team playing without one of its key standouts.

“That’s what I’ve always thought about a United kid is they’re quiet and reserved but they fight and play hard, and I can’t be more proud of the effort our kids gave tonight,” said Ogilvie. “We played hard for all four quarters and did the best we could with effort.”

“I want to commend D.J. (Ogilvie) for doing a great job with his team this week,” said Johnson. “They lose their leader, their best player gets hurt in the middle of a game week, and to be able to battle and compete like they did is a testament to them.”

Salem’s defense, led by senior linebacker Robbie Sarginger, who was all over the field, held United to just 84 yards total offense.

“Robbie Sarginger had a great game,” praised Johnson. “Sarginger says he takes pride in getting the Salem defense fired up.

“I consider myself as the guy who sets the tempo (on defense),” said Sarginger. “They feed off my hits and everything, and once I get going, then everyone gets going and we can play the best football we can.”

The Quakers rolled up 21 first downs to six for the Golden Eagles and Salem defensive linemen Jack Madison and Zack Murray both recorded sacks.

It took the Quakers all of 15 seconds to take the lead in the game as Walter cradled in the opening kickoff and set sail through the middle of the United resistance and raced 90 yards to the end zone. The PAT pass failed and the Quakers led 6-0 at the 11:45 mark of the first period.

Minutes later, Salem’s offense got into the scoring act on its opening possession. The Quakers drove 91 yards to score when quarterback Turner Johnson found senior receiver Josh Lehwald with a pass all alone in the left flats and he raced 11 yards to score. Johnson added the conversion run up the middle and Salem led 14-0 with 42.5 seconds left in the first quarter.

“On our first drive, we took eight minutes (off the clock) and it was 91 yards,” said Ron Johnson. “That (the power running game) is what we wanted to accomplish, and once we came out and established that we were able to work on a couple things.”

Salem dominated time of possession in the first half while racking up 13 first downs and 151 yards offense to the Golden Eagles’ 58 total yards and three first downs.

But the Eagles stayed in the game with an opportunistic defense. United’s Ethan Antram recovered a Salem fumble to stop one drive and teammate Keaton Baker intercepted a Quaker pass with Salem driving late in the first half at the United nine to thwart another sustained march.

The Quakers went up 22-0 with 50.1 seconds left in the third period when Johnson took the snap and scooted 13 yards untouched around the right side to score. Cade Campolito used a strong second effort to score on the conversion run to close out the scoring.

United’s deepest penetration during the game was to the Quakers’ 25 early in the fourth quarter but four plays netted zero yards and Salem took over on downs.

“Last week a lot of things went our way and tonight they didn’t,” said Ogilvie. “We played hard and that’s all I can ask of our kids is to play hard.”

• United will also be in action Friday evening when the Golden Eagles trek to Newbury to face the Black Knights.