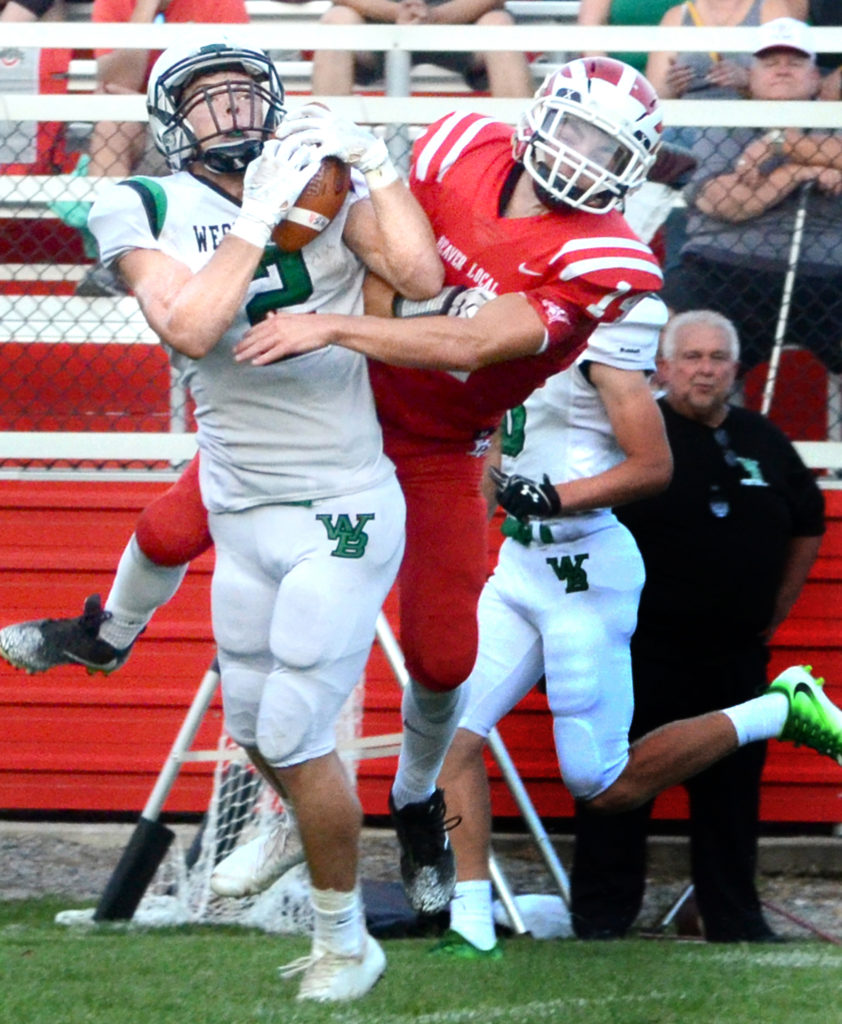 West Branch’s Jesse Rastetter (2) hulls in a pass for a first down as Beaver Local’s Tanner Johnston (14) tries unsuccessfully to break it up on Friday. (Photo by Patti Schaeffer)

CALCUTTA–At this time last season, the West Branch Warriors were an injury-plagued team wondering how they were going to piece things together after dropping their first two games to Crestview and Beaver Local.

One year later, the outlook couldn’t be more different.

After opening with a win over Crestview last week, the Warriors confidently rolled into Beaver Local and dispatched the Beavers by a score of 50-7 Friday.

“Last year, we were juggling a lot of things around, just trying to figure out what we were going to do week-to-week,” West Branch coach D.J. Dota said. “At this point, we’re a lot more consistent than we were last year just because we have a lot of healthy seniors that have gotten experience. Having 19 seniors makes a big difference. It’s been a great team effort to this point.”

The Warriors (2-0) used a solid, balanced offensive attack as well as big plays on defense and special teams to race out to a 37-0 lead at halftime. Beaver Local falls to 1-1.

Senior Jesse Rastetter totaled 112 total yards (58 rushing and 54 receiving) and a game high three touchdowns. He scored on runs of 2 and 33 yards as well as a 25 yard pass from sophomore quarterback Brock Hillyer.

“We didn’t like the taste in our mouth after starting 0-2 last year,” Rastetter said. “All we wanted to do this season was get off to a strong start. Right now, we’re a lot more confident than this time last year.”

Hillyer had an efficient passing night, going 6-for-10 for 120 yards and two touchdowns, while junior running back Gage Bickley supplied 71 yards on 14 carries, including a 25-yard touchdown. Sophomore speedster David McKeiver added three catches for 55 yards and one touchdown on a 13-yard screen pass from Hillyer.

The bulk of the Warriors returnees were along the offensive and defensive lines, and Rastetter was quick to give credit to them for setting the tone.

“We have a nice backfield, but it all starts with the line,” Rastetter said. “Whoever gets the ball just hits a hole and they’re gone.”

It was the same story on the defensive side of the ball, as the Warriors stifled the Beavers in the first half. Beaver Local didn’t get a first down until 2:19 remained in the second quarter and did not cross midfield until the third quarter.

Senior defensive back Joe Love got the Warriors off and running with a 42-yard interception return with 3:43 left in the first quarter.

“We felt our strength was going to be up front,” Dota said. “We have a lot of guys with multiple years of experience back on both sides of the ball. Hopefully we can continue this.”

“We knew they were a very good team, they just jumped on our throats” Beaver Local coach Mike McKenzie said. “I thought we had a good game plan, but I don’t think I prepared us well enough. I’ll take the blame for that, I have to be a better teacher. There’s no shame in losing to a team like that, I just didn’t think the scoreboard reflected our abilities.

• West Branch has now beaten Beaver Local in 17 out of the last 18 meetings.

• West Branch also got a blocked punt from Luke Flickinger, while the Warriors came up with a safety early in the second quarter after a high snap.