With one state title already under his belt, Crestview senior Dominic Perry’s quest for another one begins this week.

Perry enters the Springfield district this week ranked No. 2 in Ohio and first in Division III.

His top throw is 62-feet-2 and he has constantly beat his Division III state championship toss of 56-8 last year.

He was third in Division II as a sophomore.

Wellsville junior Justin Wright is also looking to make a run at a state title after finished second in the 100-meter dash last year by 1/100th of a second. He also was third in the 200-meter dash.

Wright appears to be on track with top times of 10.77 and 21.93 seconds, respectively, this season.

The Crestview and Wellsville boys will be among the 22 boys teams and 22 girls teams at the Division III district meet at Springfield Local High School today and Friday.

Crestview’s 800 relay time of 1:29.83 is the best in the area since Salem’s 2010 Division II state runner-up team ran 1:27.88, which was faster than the Quakers’ state championship team the year before.

Other returning individual state qualifiers include Southern sophomore Bradly Sloan in the long jump and Springfield junior Garrett Walker in the 400 dash.

Action starts at 4 p.m. today with the finals in the boys discus and long jump and girls shot put and high jump.

The finals in the 3200-meter relay will be held at 4:45 p.m., followed by the running preliminaries.

The meet wraps up Friday with the remaining field events at 4 p.m., followed by the running finals at 5 p.m.

The top four in each event advance to the regional at Massillon Perry High School next week.

The Salem Division II district meet will be held at Reilly Stadium on Thursday and Saturday highlighted by the Quakers’ standout teams.

She will be going for her third straight state berth in the discus after finishing 11th last year and 12th as a sophomore.

Four other Quakers competed in individual events at the state meet last year — junior Hunter Christopher in the boys 3200 run, senior Cooper Stockman in the boys discus, senior Turner Johnson in the boys high jump and senior Haley Rozeski in the girls 1600 run.

The remaining field events will be contested at 11:30 a.m. Saturday, followed by the running finals at 12:30 p.m.

The top four in each event advance to the Austintown Fitch regional next week.

Also in Division II, there will be 14 boys teams and 12 girls teams at the East district meet at West Holmes High School on Thursday and Saturday.

The top four in each event advance to the regional at Muskingum University next week.

The 112th annual state track meet will be held May 31 and June 1 at Jesse Owens Memorial Stadium on the campus on Ohio State University. 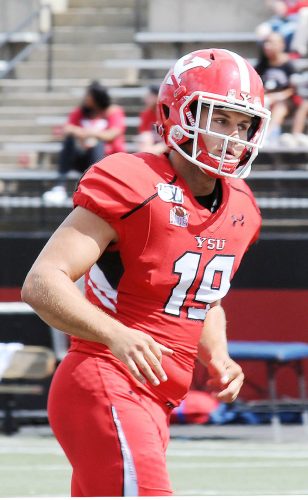