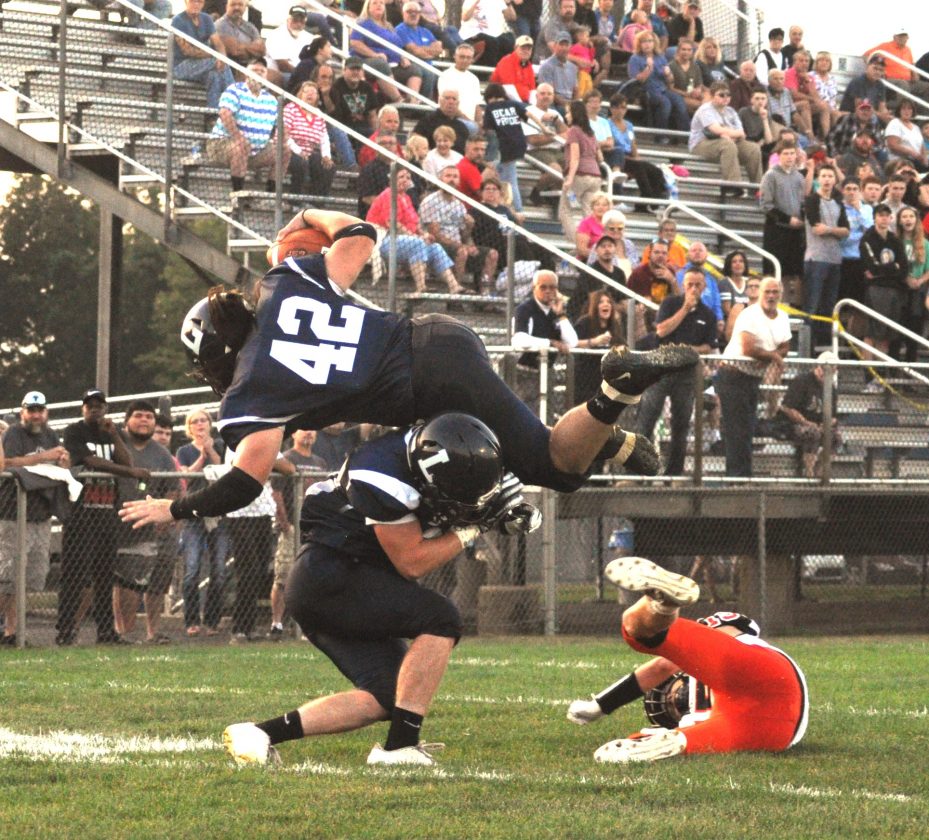 Leetonia’s Dylan Durick goes airborne for a touchdown after catching a pass from Dylan Lennon on Friday. Durick is leaping over teammate Jordan Baker as Wellsville’s Valen Krzyston looks on. (Photo by Michael Burich)

LEETONIA — The Wellsville Tigers made some crucial adjustment at halftime that helped propel them to 18 unanswered points in the second half of their 25-10 victory over Leetonia on the Bears’ homecoming night.

The victory gives the Tigers a 3-1 overall mark on the season, 1-0 in the Eastern Ohio Athletic Conference.

For the second straight season, the Bears drop their first league game of the season after starting the year 3-0. The Bears now hold a 3-1 record, 0-1 in the EOAC.

With the Bears holding all the momentum at the halftime intermission 10-7, the Tigers made some key adjustment in the locker room that proved to be vital in stopping the Bears punishing rushing attack and helping to kickstart their own offense. The Bears only generated 37 yards of offense in the second half.

“Our staff made some adjustments at halftime and talked to some players,” Tigers coach Robert “Moose” Ramsey said. “They bought into what the coaches were saying and they executed it well in the second half. Hats off to our kids.

“The guys upstairs, coach (Randy) Thrasher and coach (Shawn) Carter, saw some things and we keyed off of those and our defense adjusted well. They played lights out in the second half.”

“We just covered our game plan and came out and executed it,” Tigers running back Justin Tice said. “We made our adjustment. We stopped Marco Ferry, the kids a tank.”

“They had a good scheme” Bears coach Paul Hulea said. “We couldn’t get out of our own way offensively. We made some plays moved the ball a little bit. But we couldn’t finish what we started a couple times.”

The Tigers started the second half with Justin Tice racing around left end 40 yards to set up an 11-yard blast up the middle with 9:52 left in the third quarter. That gave the Tigers their first lead of the game at 13-10.

“We made our adjustment for that play, for the sweep during halftime and we came out and executed it well. It allowed me to get free,” Tice said.

The Tigers added to their lead just before the end of the third quarter when Tigers quarterback Troy Carter hit Darien Suggs on a 36-yard scoring strike down the right sideline with just 56-seconds remaining in the frame. The score was set up on a 10-yard fake punt run by Suggs at the midfield stripe at the 2:37 mark.

“We were really flat in the first half, and we talked about it at halftime,” Ramsey said. “We said we have to come out and play with vengeance.”

The Tigers added the last score of the night on a 5-yard run by Suggs with only 1:08 left in the contest. The score was set up by an 80-yard sprint up the middle by Tice.

The Bears had taken the momentum into the locker room at halftime following a fumble by the Tigers with just 50-second left in the half. Bears kicker Gavin Steiskal nailed a 30-yard field goal as time expired to give the Bears a 10-7 lead at the break.

The Bears scored first in the contest on a 3-yard pass from quarterback Dylan Lemon to Dylan Durick with 4:54 remaining in the first period. The Tigers answered 8:37 remaining in the second quarter on a 1-yard run by Justin Sarge to tie the game at 7-7.

“It is what it is,” Hulea said. “We start to regroup, get better, learn from it and move on. The sun is going to come up tomorrow.”

The Tigers will travel to rival Lisbon next Friday night. The Bears take on Columbiana next Friday at Firestone Park.