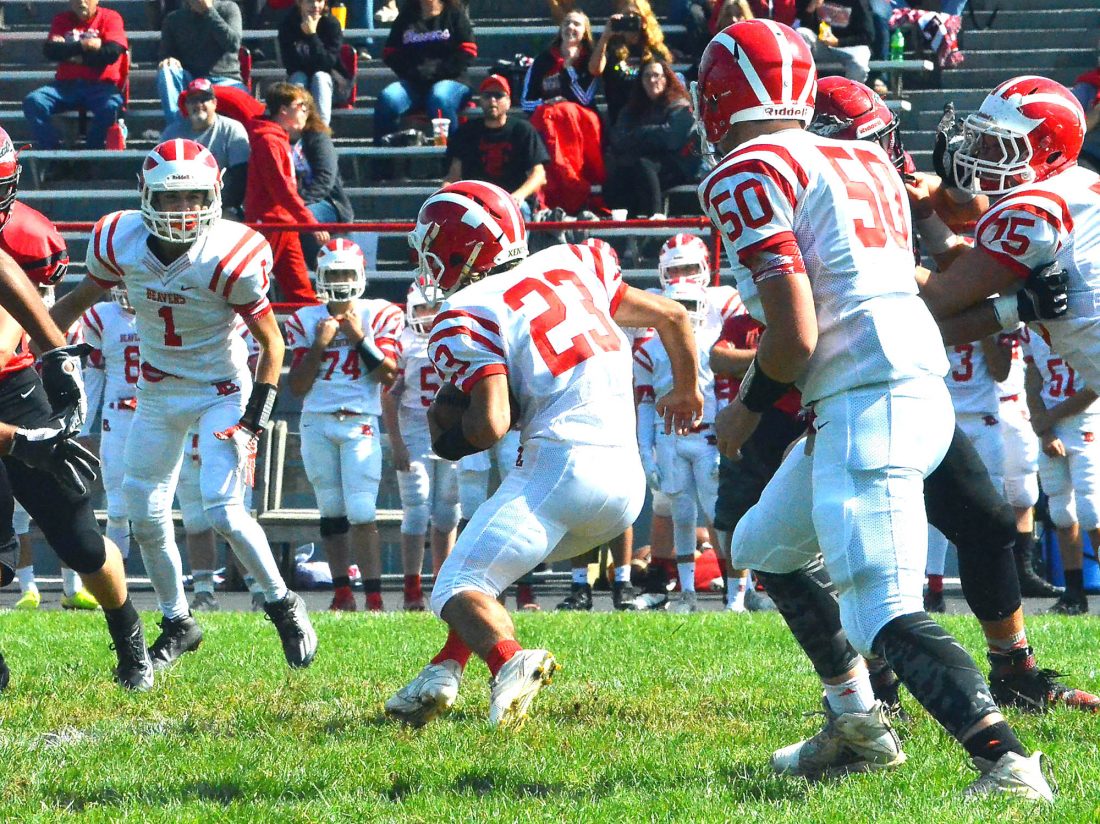 Beaver Local running back Jacob Kane follows the blocks by Tommy Warrick (50) and Dylan Moore (1) during Saturday’s game at Bellaire. (Special to the Salem News/Rick Thorp)

BELLAIRE — For the first 16 minutes of Saturday’s game against Beaver Local, Bellaire looked like a team trying to find its way.

But during the final eight minutes of the first half, the Big Reds looked like a squad that had found it.

Bellaire exploded for 14 points during the final 3:21 of the first half, part of a 20-point quarter. All told, the Big Reds scored 36 unanswered points in besting Beaver Local, 36-7, under sunny skies at Nelson Field.

Bellaire improves to 5-1, while Beaver Local moves to 3-3.

For Big Reds coach Mark Spigarelli, his team’s fourth straight victory was its most complete performance of the season, with his offense and defense coming up clutch time and again.

Bellaire’s defense forced seven turnovers (four interceptions, three fumbles) and its offense put the ball in the hands of a myriad of players, all of whom contributed at different points in the contest.

“I told the guys when we left the locker room that someone had to make a play,” Spigarelli said. “Someone had to put the team on its shoulders and make a play. We had a lot of guys do that, probably more defensively than offensively.”

Cole Porter was one of those players that grabbed the bull by the horn. The senior rushed for a score, returned an interception for a TD, booted a 25-yard field goal and three extra-point kicks.

“That’s Cole,” Spigarelli said. “That’s what he does for us. He’s a great athlete who works his butt off in the weight room and practice. He eats up holes pretty good, and when he gets in there he goes like crazy.”

Porter’s 20-yard interception return early in the second quarter got Bellaire on the board following a sluggish first 14 minutes that saw both teams turn the ball over a combined four times.

With 8:17 left in the first half, the Big Reds started at their own 7. Two passes by Bobby Roth –a 16-yard strike to Trenton Wilson and a 19-yard toss to freshman Ray’shad Pettigrew down the left sideline — helped Bellaire get into Beavers territory. Following three Roth rushes up the middle, Porter put Bellaire on top for good with a 27-yard scamper that helped make the score 13-7.

A.J. McCarthy picked off a pass on Beaver Local’s ensuing drive. Then, four plays later, he was the beneficiary of a 35-yard strike from Roth that made the score 20-7 just before halftime.

Bellaire’s first five drives netted just 21 yards of total offense, not to mention a fake punt by the Beavers that extended one drive. But during its final two drives of the half, Bellaire amassed 132 yards and grabbed momentum for good.

“We went up 7-0 and had the opportunity to go up 14-0 when we had a turnover,” Beaver Local coach Mike McKenzie said. “I didn’t have a good enough game plan offensively. I thought our defense, in the first half, hung tough. But offensively, we just didn’t move the ball well enough and didn’t make enough plays. That’s on me.”

Bellaire held the Beavers to 258 yards of total offense, with 192 of it coming through the air from quarterback Ethan Lewis.

“That’s the best I’ve seen them play this year,” McKenzie said of Bellaire’s defense. “They were very fast and very physical. They played extremely well.”

Spigarelli believed the game was won in the trenches. He praised his offensive and defensive lines for providing big holes and for allowing Roth to have time to spot open receivers.

“I think the guys are taking to coaching a little better and getting their assignments down, especially with blocking on the offensive line,” he said, noting many guys have been solid in filling in for the injured Trace Sechrest. “Cody Albaugh (who had a 92-yard TD run) did a super job blocking, and I think Brandon (Mamie) come in a did a nice job blocking from the fullback spot.

“But, overall, I think we played well. Beaver is always a tough team to beat.”

Beaver Local will play at Buckeye Local on Friday night.

WELLSVILLE — Kayla Muslovski had 27 points and seven steals, while Grace Witmer had 12 points and nine rebounds ...