Dukes lower the boom on Salem 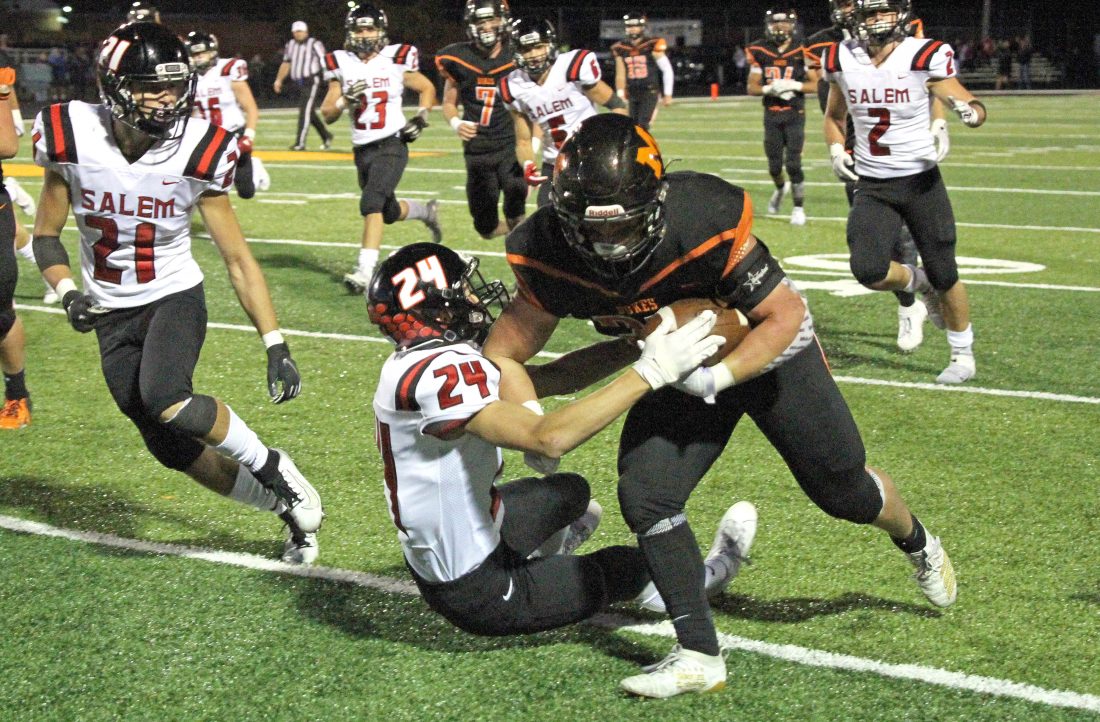 Salem’s Blaize Exline tries to tackle Marlington’s Anthony Sabatino on Friday. Also in on the play is Jax Booth. (Photo by Gary Leininger)

ALLIANCE — Salem fell behind Marlington 24-0 in the fourth quarter but made a spirited comeback late in the game to pull within eight points, but it was too little and too late in a 24-16 Eastern Buckeye Conference setback to the Dukes Friday night at Marlington Stadium.

“They (the Dukes) are a good football team and they had a nice plan,” said Salem coach Ron Johnson. “We made a couplez of mistakes, but you have to appreciate how hard we played to the very last second,” he added of his team’s late comeback effort.

It marked the Quakers’ first loss of the season as they are now 5-1 overall and 2-1 in the EBC, while Marlington improved to 4-2 and is 2-0 in league play.

The game was won at the line of scrimmage as Marlington controlled the trenches and rang up 274 yards rushing on 49 trips on the ground to just 65 yards on 28 carries for the Quakers. Marlington running back Anthony Sabatino led the Dukes with a game-high 190 yards on 23 carries and scored one rushing touchdown.

“It was a crazy week for us, we battled some injuries and didn’t know if some guys were going to be playing,” said Marlington coach Mark Gulling of the Dukes’ decision to primarily stay on the ground and cut down on using their strong air game. “And all of those (people who were out) were at skilled positions, so we said we really needed to rely on our line.”

Meanwhile, the Dukes’ defense was successful in limiting the Quakers’ dangerous double-threat quarterback Niko Walter to just 21 yards rushing on 10 carries. Cade Campolito led all Salem rushers with 42 yards on the turf on 14 carries.

“This was a big one (league win) tonight,” said Gulling. “We knew we had to get this one and we’re happy.”

Leading 7-0 at halftime, Marlington marched 66 yards to score on its opening drive of the second half, capped by a 5-yard scoring run by running back Nolan Hooker and Macagey Laure’s PAT, making it 14-0 at the 6:58 mark of the third. Minutes later, the Dukes went up 17-0 when Laure booted a 38-yard field goal.

The Dukes increased their lead to 24-0 at the 6:42 mark of the fourth quarter when Sabatino raced 15 yards up the middle to score and Laure split the uprights on the PAT.

“We knew we needed to rely on our bigs and be big and physical, and that’s what we concentrated on all week and we were able to have success,” said Gulling of the Dukes’ strong rushing performance.

“Sabs did a great job,” added the Marlington coach, “and I give a lot of credit to our offensive line.”

But then Salem made things interesting on the Quakers’ ensuing drive which started at the Salem 43-yard line. Walter took the snap and fired a pass to Salem receiver Brock Young at the Marlington 35 and Young lateraled the ball to receiver Anthony DiMuzio who sprinted untouched down the left sideline to score. The Quakers also added the two-point conversion on a pass from Walter to Jax Booth and Salem trailed 24-8 with 5:49 left in the game.

Then lightning struck again for Salem. Marlington was pinned deep in its own territory on its next drive and coughed up a fumble at its own 6 and Salem defender Zach Murray swooped in to pick up the loose football and zipped 6 yards into the end zone. Again, the Quakers added the two-point conversion on a run by Walter, and suddenly trailed just 24-16 with 1:31 left to be played.

Salem nearly pulled off a successful onside kick, recovering the ball, but a Quaker player touched the ball before it went 10 yards and Marlington got possession and ran out the clock.

“We were going to play all 48 minutes, and who knows, we popped the first touchdown in and get the turnover and score and anything could happen,” said Johnson. “We got the onside kick I guess just a foot too soon, but we executed everything down the stretch, we just didn’t get the win, and only one team is going to win every week.”

Marlington scored on its opening drive of the game, marching 77 yards and eating over 10 minutes off the clock and scored when quarterback C.J. Greiner took the snap, rolled right and found Andrew Carr all alone in the right corner of the end zone. Laure added the conversion kick and the hosts led 7-0 at the 2:36 mark of the first quarter and made that score stand up at halftime and setting the stage for an wild second half.

Johnson said the stretch run of the EBC title race is going to be exciting for several teams, including Salem.

“We just have to keep playing hard because there’s no goal that we’ve set for ourselves that we can’t accomplish,” he said. “We need to keep fighting and scratching and clawing and get better every week.”

Salem’s last win over Marlington occurred in 2015 when the Quakers bested the Dukes, 36-28.

Salem goes back on the road next week when it plays another key EBC game at Alliance.

“Next week we have a good football team (Alliance) we’re traveling to and we’ve had good success there and we’ve got to get ready to play,” said Johnson.