No repeat performance from United 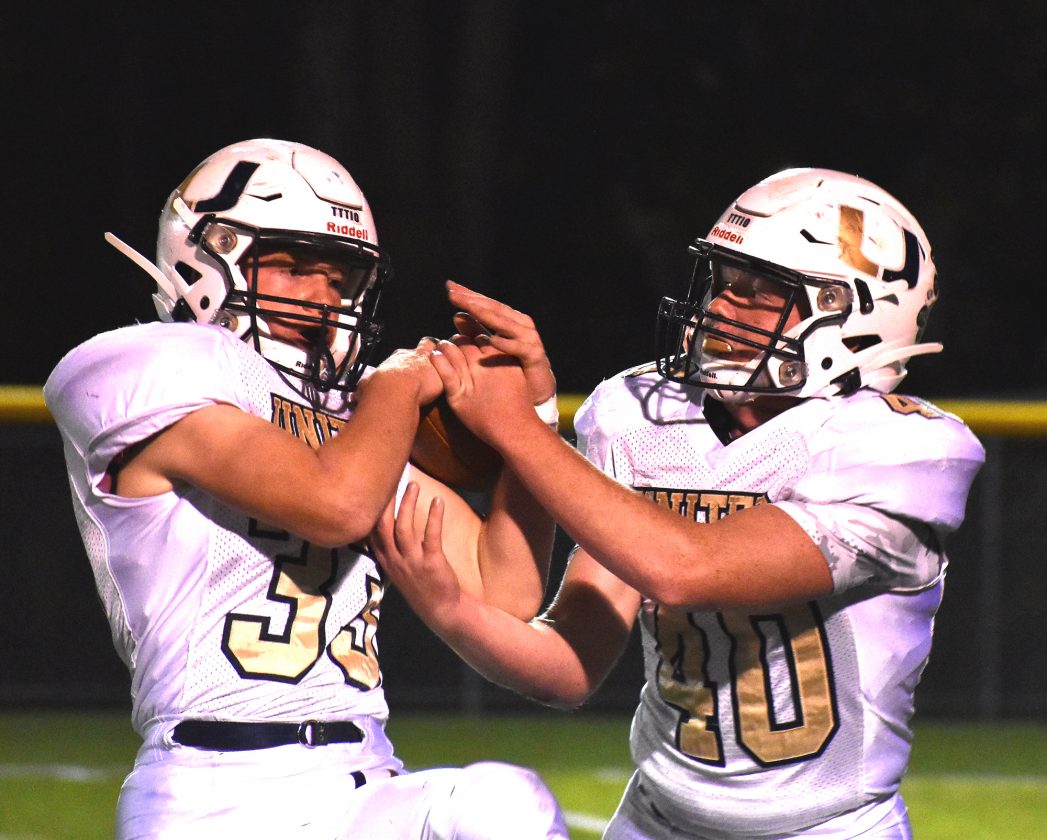 United’s Caden Marshall (left) and Tyler Lippiatt fight over the ball on a kickoff against Southern on Friday. (Photo by Ron Firth)

SALINEVILLE–The Southern football team has waited over a year to pay United back for ruining its shot at an unbeaten regular season. The Indians got their chance Friday and left no doubt.

Behind a varied offensive attack and a fierce defense, the unbeaten Indians delivered a punishing 65-0 victory over the Eagles at Southern Local High School.

The Indians improve to 8-0 overall and 4-0 in the Eastern Ohio Athletic Conference, inching one step closer to locking up both an outright league title and a state playoff berth. The Eagles, who have seen their original starting lineup decimated, fall to 3-5, 2-2.

“No disrespect to United, they’ve had an unfortunate situation with injuries, but we have waiting for this one,” Southern coach Rich Wright said. “We thought they were tougher than us last year. We’ve been working all year to try and get that physicality back.”

The Southern attack came fast and furious. The Indians outgained the Eagles 395-28 and had seven different players reach the end zone. The score at halftime was 55-0.

Quarterback Jayce Sloan was nearly flawless on both sides of the ball, completing 4-of-6 passes for 65 yards and three touchdowns. He also picked off two passes from his defensive back position, returning one 53 yards for a touchdown. For good measure, Sloan also hauled in a 19-yard pass from receiver Cam Grodhaus.

“It was electrifying being out there tonight with these guys,” Sloan said. “All through practice this week we worked hard and everyone did their job tonight. It made the game a lot of fun.”

The Eagles are missing half of their opening night lineup, but came into Friday’s game revived after pulling off a 46-30 upset over Wellsville last week. Wright thought his squad was well-prepared, but even he didn’t see a result as dominant as what the Indians delivered.

“That game got our attention,” Wright said. “United’s a young team, but we thought they looked really good last week on film. We prepared really hard. We didn’t expect a score like this tonight. United has been dealing with bad break after bad break, I wish them luck the rest of the year.”

The Indians were chewed up on the ground in last year’s matchup, but snuffed out United’s rushing attack all night Friday, limiting the Eagles to 28 yards on 29 carries.

“We’ve been improving all year on defense,” Southern lineman Kyle Young said. “We put together a great week of practice and everybody got the job done.”

Also getting in on the action for the Indians was wide receiver Bradly Sloan, who hauled in a 33-yard touchdown pass in-stride from Jayce Sloan to get the scoring spree underway. Dylan Milhoan had a solid night of work with 82 rushing yards, including a 26-yard score on just five carries. Cam Grodhaus added touchdown runs of 29 and 11 yards, while linebacker Hunter Morris scooped up a fumble recovery and darted 43-yards to the end zone for a touchdown.

The Indians’ first half performance was so complete that most of the starters came out of the locker room after halftime with their pads already off.

The Eagles will now try to re-group and finish the season strong with games with home games against Leetonia and Lisbon the next two weeks. United, Wellsville and Leetonia all have two league losses and look to be fighting for third-place in the EOAC.

“For us it comes down to getting better in the weight room and in offseason training,” United coach D.J. Ogilvie said. “Southern was way more physical than us tonight. If we want to get to that level of having a playoff program, we have to spend the offseason getting stronger. It’s that simple.”

Southern continues its quest for a perfect regular season next Friday when they travel to rival Wellsville.

“Last year United spoiled things for us,” Sloan said. “We want to make history this year and do something that’s never been done before. To have that goal in front of us is a powerful motivation.”

• Southern has now won 18 of its last 19 regular season games.

• The Indians wore commemorative U.S. Army jerseys as part of Veterans Appreciation Day. Local veterans were admitted to the game for free.