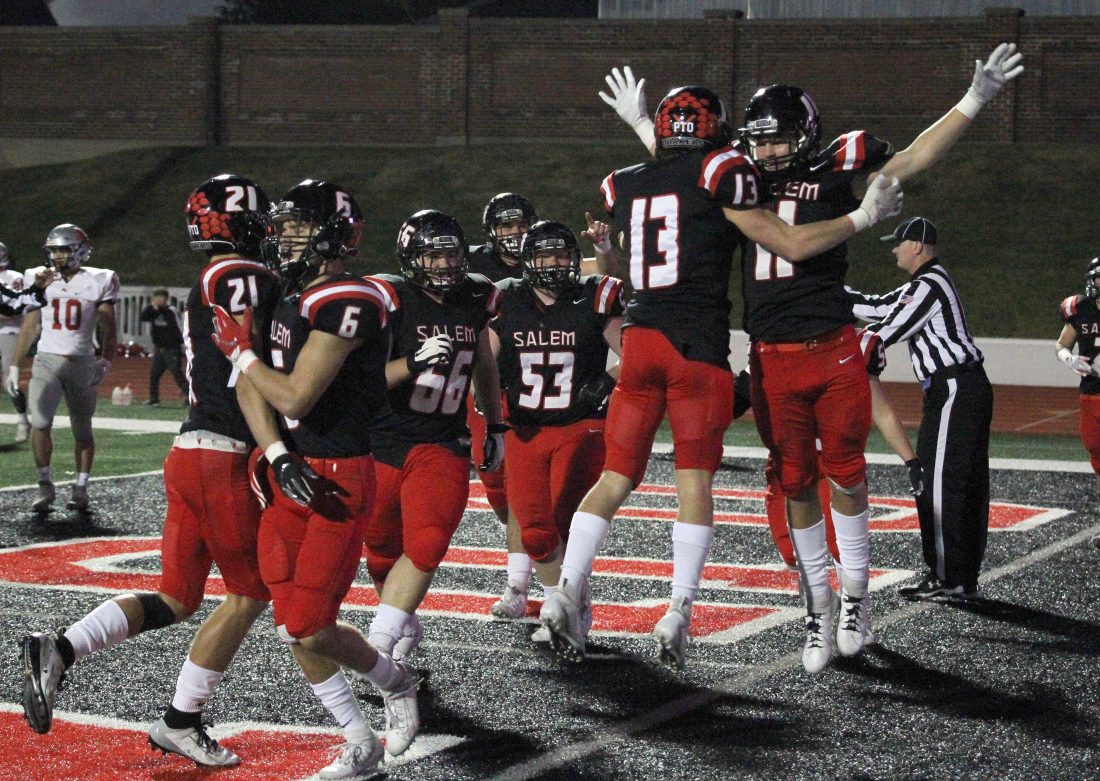 SALEM — It’s down to two to hopefully make eight for the Salem Quakers– as in win its last two games to make the final eight in its Division IV playoff region and qualify for the postseason.

The Quakers took another step toward that goal Friday night as they rolled to a 42-13 Eastern Buckeye Conference win over Minerva at Sebo Stadium.

“After (the loss to Alliance) last week, we know we’re in the playoffs, it just started this week,” explained Salem head coach Ron Johnson. “We know if we continue to win, we’re going to get to continue to play.”

The triumph was Salem’s sixth of the season as the Quakers are now 6-2 overall and 3-2 in the EBC and have two more regular-season games left– both at home against Akron Kenmore-Garfield and West Branch — in hopes of landing one of the eight playoff spots in D4 Region 13. The Quakers were eighth in the region heading into Friday night’s game.

With the loss, young Minerva is now 1-7 overall and 1-4 in the EBC. “They (the Quakers’) varsity offense and defense is just fast,” said Minerva head coach Mark Hundley. “They are fast and they use that aggressively and it was just more than we could handle. We’re not there yet.”

Salem has now enjoyed three straight winning seasons under Johnson and five straight .500 or better campaigns since 2015. The Quakers made it five consecutive wins over Minerva on Friday by using a great balanced offensive attack, spearheaded by freshman quarterback Jackson Johnson who made quite a varsity debut under center. Johnson passed for 169 yards on 14-of-16 completions with four passing touchdowns. He also added a rushing touchdown for good measure.

“It was fun,” smiled Jackson Johnson who was very cool under pressure for a freshman. “After the first (series) it was just like playing in another junior high or freshman game, just like the same thing I’ve been doing,” he added.

“I didn’t realize that’s what he did, that’s outstanding,” said Ron Johnson of his son’s sterling performance. “But I’m proud of our whole football team,” added the Salem coach.

“We came out of the gates and played very well,” praised Ron Johnson. “We did a lot of things very, very well.”

“The wide receivers played good, the O line played good and we ran the ball hard,” praised Jackson Johnson of his teammates.

It all added up to a commanding 36-0 Salem lead at halftime and a running clock to start the second half. Ron Johnson played his second and third-teamers in the final 24 minutes.

Tyson Swiger and Joey Watson had fumble recoveries on defense for the Quakers and Steven Place recovered a Salem fumble for Minerva.

Minerva took the opening possession of the second half and drove 58 yards to score on a five-yard run around right end by running back Steven Place. Kicker Nick Chaddock added the PAT, making it 36-7 at the 7:09 mark of the third quarter which stopped the running clock.

The Lions scored again on their next possession when Place took a handoff, reversed field and raced 31 yards to the end zone. The PAT kick failed and the Lions pulled within 36-13 at the 1:06 mark of the third quarter.

“I think we’ve gotten better,” said Minerva’s Hundley. “I was hoping we were even better than we are, so I know we have work to do.” Salem closed the scoring in the game when backup quarterback Logan Blissenbach raced around right end to score from 63 yards out with 3:42 left, making it 42-13. The conversion run failed.

“I’m very pleased with our team but we still have to get better next week because there are things we can improve on,” closed Ron Johnson.