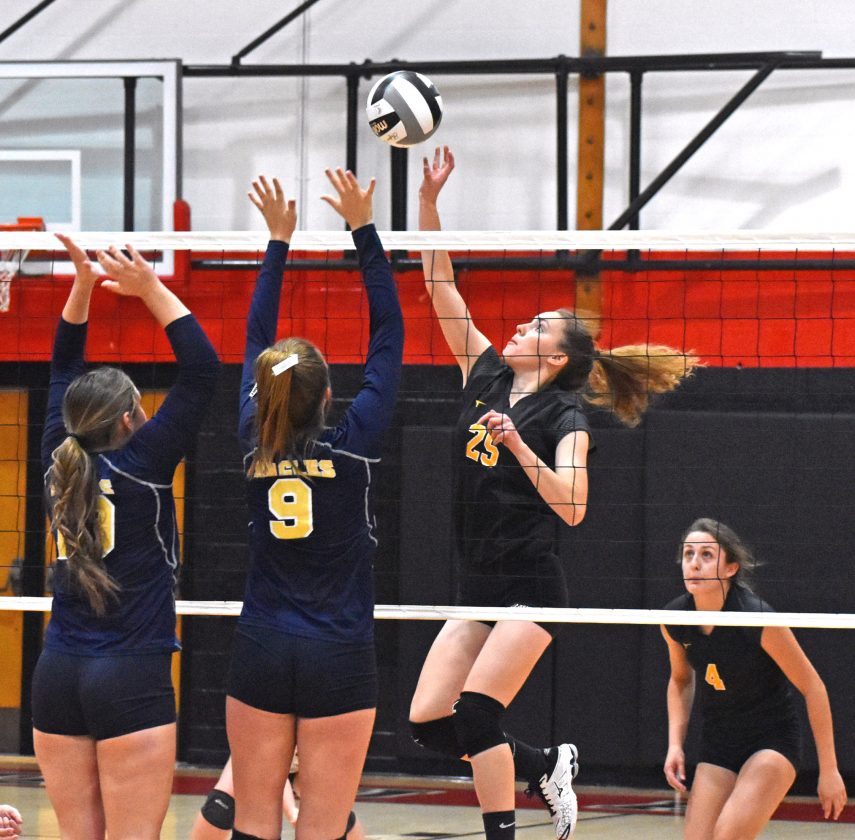 SALEM — The state-ranked Crestview volleyball team has rolled through a good portion of its schedule unchallenged, and Thursday’s Division III sectional final at Cabas Gymnasium was no exception.

Playing with purpose and intensity, the top-seeded Rebels wasted no time in disposing of eighth-seeded United 25-8, 25-13, 25-10 in a match that took a little under an hour.

“What you saw out there was exactly what I was hoping for tonight,” Crestview coach Alisha Auer said. “We showed up ready to go, played our game and controlled the match.”

The Rebels, ranked ninth in Division III, improve to 22-1 overall and advance to take on fifth-seeded Waterloo in a district semifinal. The Eagles finish 9-15.

It was Crestview’s eighth straight victory (all in straight sets) and 18th sweep of the season.

With so many lopsided matches, it would be natural for a team to let its focus drift from time to time, but Auer has been impressed with how the Rebels have kept their edge.

“This team is always pushing each other,” Auer said. “We have the goal to get a little bit better with every match.”

Senior outside hitter Brenna Auer credited the Rebels’ practice sessions with keeping the team sharp for the postseason.

“We get after it pretty good,” Brenna Auer said. “We’ll play against coach (Alisha Auer), she’ll get up on the ref stand hit hit balls at us really hard.”

The Rebels showcased their variety of weapons Thursday.

Lucy Montgomery handed out 22 assists and came up with four digs. Amelia Montgomery had eight digs and three aces.

“Everyone played a part tonight,” Brenna Auer said. “I really like how we kept our intensity up throughout the entire match.”

Alisha Auer said depth has been one of the defining characteristics for the Rebels this season, which should serve them well as they advance deeper into the tournament.

“I feel like we don’t have too many weaknesses,” Alisha Auer said. “We’re very strong top to bottom. When one strong hitter rotates to the back row, another one rotates to the front.”

“I’m proud of the girls,” United coach Mary Alice Sigler said. “We knew Crestview was a great team, they have a deep bench and are ranked ninth in the state for a reason. Alisha does a great job with them.”

Sigler credited the Eagles with adapting after her and Tammy Daggy took over for the second half of the season after head coach Don Conser stepped down due to personal reasons.

“The girls went through a lot of change this season, but they adjusted well,” Sigler said. “Nobody ever quit on us.”

• The Rebels have not dropped a set since they lost to Salem in their last visit to Cabas Gymnasium on Sept. 21.

• Crestview has advanced to the district round five seasons in a row.

• United played both Waterloo and Rootstown during the season, losing to both in four sets.

“Either one of them could give Crestview a challenge,” Sigler said. “They both have some pretty big hitters.”

• Thursday was the third meeting between Crestview and United this season, with the Rebels sweeping all three.

• Sigler does not see herself becoming the permanent coach next season.

“People have been asking me, but I have a child at home and I doubt I’ll be back,” Sigler said. “They needed somebody for the rest of this season and I was happy to step up.”